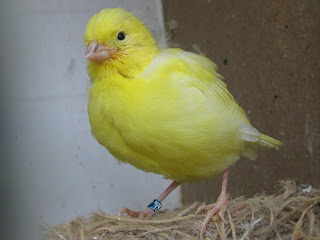 This Border chick is starting to eat corn on its own and the parents are still feeding it. No supplemental feeding is necessary at this time. 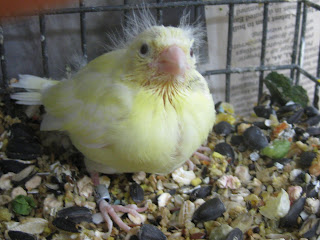 Finding chicks out of the nest when they are less than 18 days old, generally means they are not being fed enough. This one is eating some hard boiled egg on its own and papa bird is feeding him some. I am not supplementing it because it isn't crying and seems content. 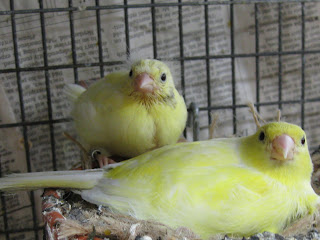 Momma German roller has two more eggs which will likely not hatch at this late date because most hens no longer have good incubation temperature. 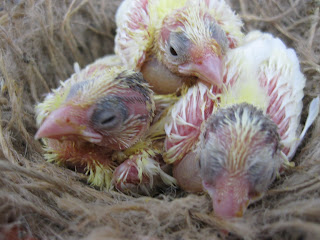 These three German roller chicks are hardly ever fed by the parents. I often find one on the floor. They beg till they fall out of the nest. I am feeding them ever couple of hours or sooner if they are empty. I have my husband Pat feeding them on the evenings that I work.

He says:" Don't any of these birds feed their chicks anymore?" I explained that it is really too late in the season and that is why it is so much of a problem... He wonders why I have chicks now then??? Lately, I have been wondering that too!!

He reported that last night, one chick in the nest of three ate well for him and one ate so so but the smallest one wouldn't eat for him at all. I ask him did you tickle it under the chin to get it to open up and he said "I did, and when that didn't work, I told it a joke". LOL (I bet he said more than a joke!!)

I shared with him my pearls of wisdom regarding jokes. "It took me a long time to realize that when folks don't laugh at my jokes, it might be cause they are not funny!!" Know any funny bird jokes he could use??? 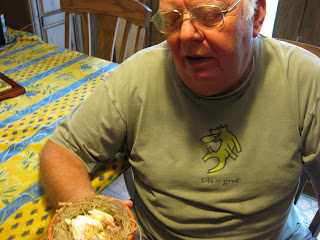 Hi Linda, that husband of yours he's a keeper, I thought of a funny for him, he'll pry use this one against you

guess thats what you get for going around kissing lil peckers


I could'nt stop laughing first time I read this

hope you enjoy it
Gwen