I am not an avian veterinarian but I have owned,bred and treated birds my entire professional life.  One of the first things I did after I graduated from veterinary school in 1970 was to purchase a pair of canaries.  I soon realized these birds were infected with air sac mites because of the clicking sounds they made when breathing after flight.

Treatment for air sac mites at that time was very primitive.  The bird and cage were put into a large plastic bag alone with an organic phosphate compound poured onto a rag.  The bag was closed for 30 minutes and the bird would breathe the vapors from the chemical that was purchased from a garden center.   However this compound only killed the adult stages of the air sac parasite.  In fact all wormers for any parasite at that time only killed the adult parasite, not any of the pre-adult forms or eggs.

If I  saw air sac mites in my aviary today I would mix Sevin into a sprayer and spray the cages.  If it was during breeding season I would also put Sevin dust in the nest boxes until I had the parasite under control.  Sevin is not toxic to birds.  Sevin only kills the adult form of the parasite.

After Ivermectin was invented treating parasites became more effective.  What is unique about Ivermectin is that it not only kills the adult form of a parasite it also kills the younger pre-adult forms.  There is no drug on the market today that kills the eggs.

Ivermectin originally was given a bad rap by the bird industry because when it first came onto the market it could only be purchased in an oil base form.  Oil does not mix with water so when individuals tired treating their birds mixing it in their drinking water the treatment failed.  Today it can be purchased in an aqueous form so this is not longer a problem.

I have wormed my birds with Ivermectin without any problem.  It has been given to my canaries, finches including my red siskin finch.  I have never used the topical form of  this drug.  I know many have and like to use it.  For me the major drawback is one must catch each bird to apply the drug, plus I have had breeders tell me that they have had birds die every time they use it probably resulting from overdosing.  The complaint given for using ivermectin in the drinking water is  one has no control over the amount the bird drinks.  This might be a concern in some parrots but I have never had a canary or finch refuse to drink the treated water.

Air Sacs function as an oxygen reservoir in birds in addition to the birds lungs and there purpose is to ensure that the bird is light enough to enable it to fly.  These cavities can be a site for the air sac mite, Sternostoma tracheacolum..  The size of the mite is only .2mm, they are black or grey in color and almost invisible to the human eye.  The parasite thrives in humid conditions.
The life cycle:  The female mite lays it eggs in the birds lungs.  The eggs hatch and quickly develop through growth stages into sub adults.  Once they ingest a blood meal the females move into the air sacs while the male stays put in the lungs to mature.  Once the female is an adult it moves up into the birds windpipe and sinuses.  When it is mature enough to lay eggs it returns to the lung and lays their eggs there. Some of the developing sub adult stages can go dormant within the respiratory tract for extended periods of time.  This adds to the difficulty in treating the air sac mites.

The total time from hatching to maturity is thought to be no more than 6 to 8 days.  Interestingly the mites have been seen outside of the bird on its perches, food and water. These mites possibly pass out of the bird into the birds environment when the bird coughs.  During one of the birds coughing spells the bird can shake its head but you do not see any mucous drainage as you would see if the bird had a sour crop.

Symptoms:  Sneezing, coughing, wheezing, labored open mouth breathing and a clicking sound while the bird is breathing, especially after  flight.

I recommend treating a bird with air sac mites with Ivermectin.  Once the bird is treated with the Ivermectin, the drug is in the birds tissue and when the mite takes a blood meal the mite dies.  As already mentioned  the 9 air sacs in the bird have very thin walls with little blood supply.   This makes it difficult for the Ivermectin to come into contact with the mites once the mite moves into the air sac, so repeated treatments every two weeks is required.  I would repeat the treatment at least 4 to 6 times two weeks apart.

Ivermectin kills all parasites except coccidia.  Coccodia requires a specific medication to treat a bird for coccida and the medicine for coccida does not treat other parasites.

Can't stress the fact that the air sac mite likes humidity.  If I had a problem I would add a dehumidifier to the aviary.
Please address all questions to me at emu@tir.com
Dr. Jim

Response to dosage question: The dosage I use is 1cc (ml) per quart of drinking water.   Jim

Thanks so much Dr. Jim for this article, we look forward to more in the future!

The Richard May family in Mobridge has decided to do our memorial / celebration of Richard’s life on May 24th.  The stone will be placed in a flower garden at the family home.

Thank you again for your help, thoughts and prayers.

I feel that the best legacy would be if some of his birds continued to compete. 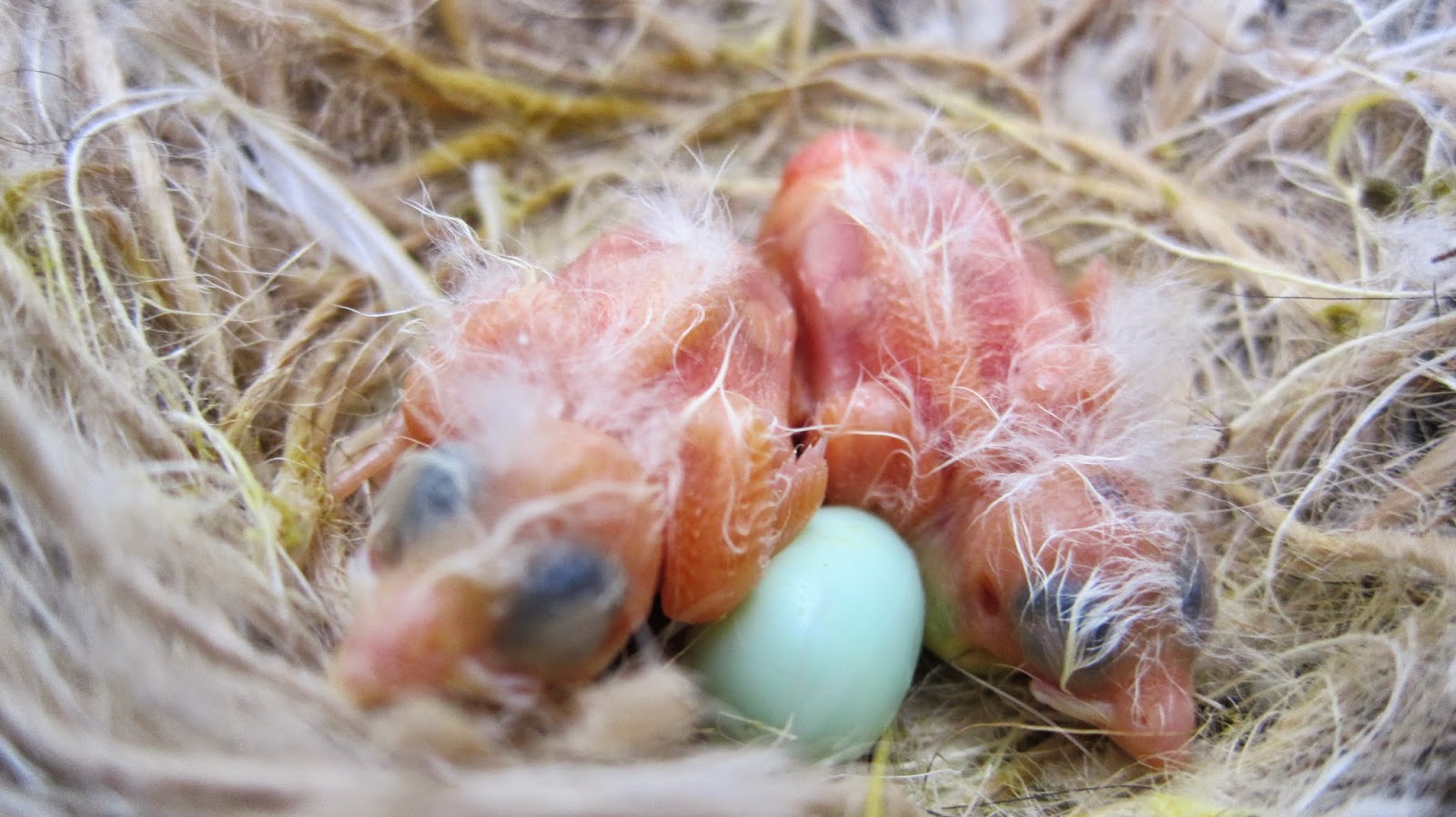 When checking chicks, I like to note several things. (Click on each photo and make your assessment.)

1. Are they being fed well and growing at a rate to be banded at about 5 days? These German Roller chicks are being well fed and growing very fast. 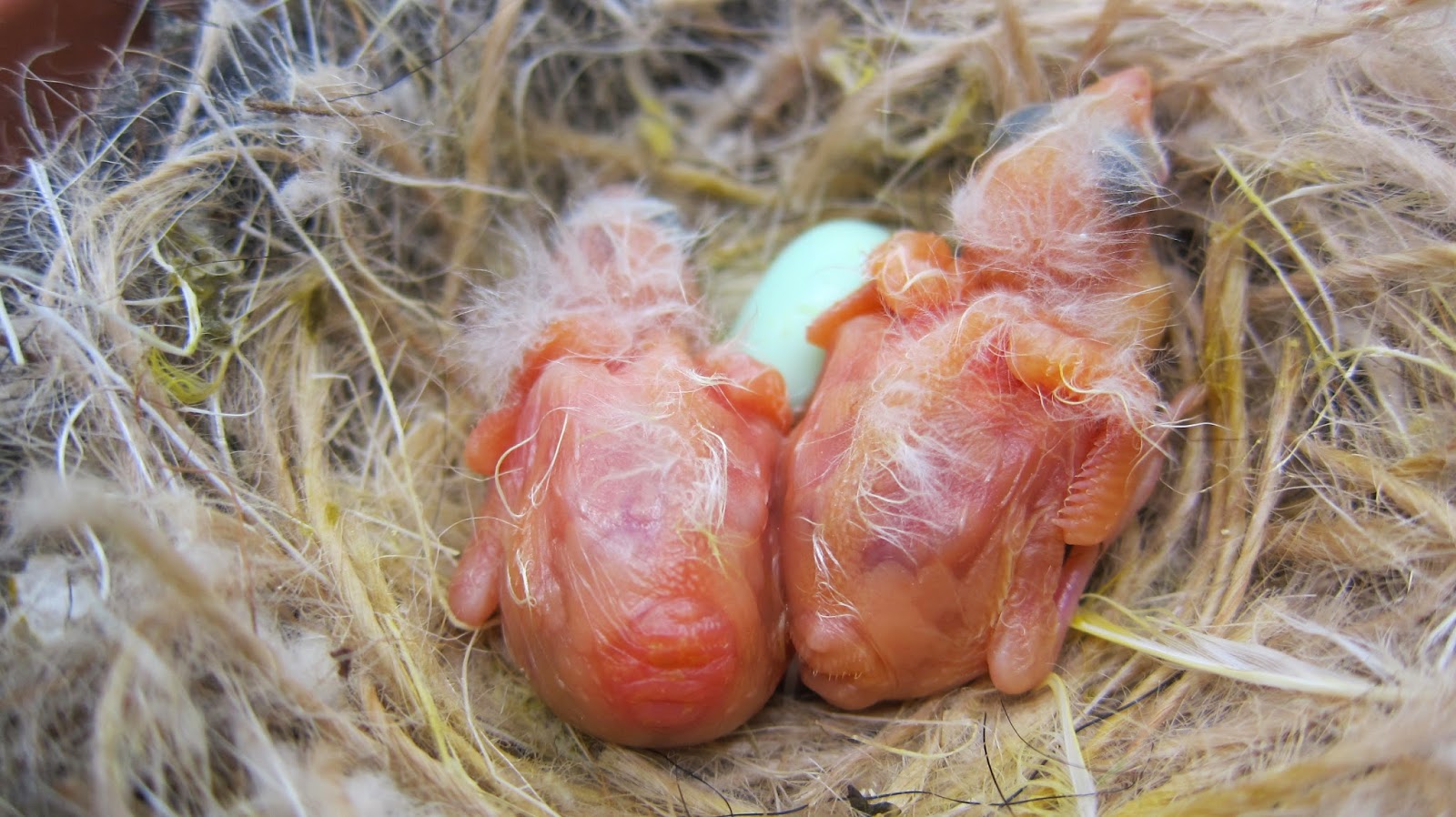 3. Is a fat layer visible under the skin on the rump? Yes

What else should be noted and what action needs to be taken?

Please Send in your answer and I will continue and finish this post tomorrow. (only right answers are posted, so give it a shot!)

Correct! Too Much Protein! Offer peas and dry plain nestling food and start on Dr. Rob Marshall KD Powder. Note red color on left chick skin and rump. Skin shows some creasing and dehydration. Wash and carefully remove the thin invisible lacquer layer that is threatening to plug the vent. 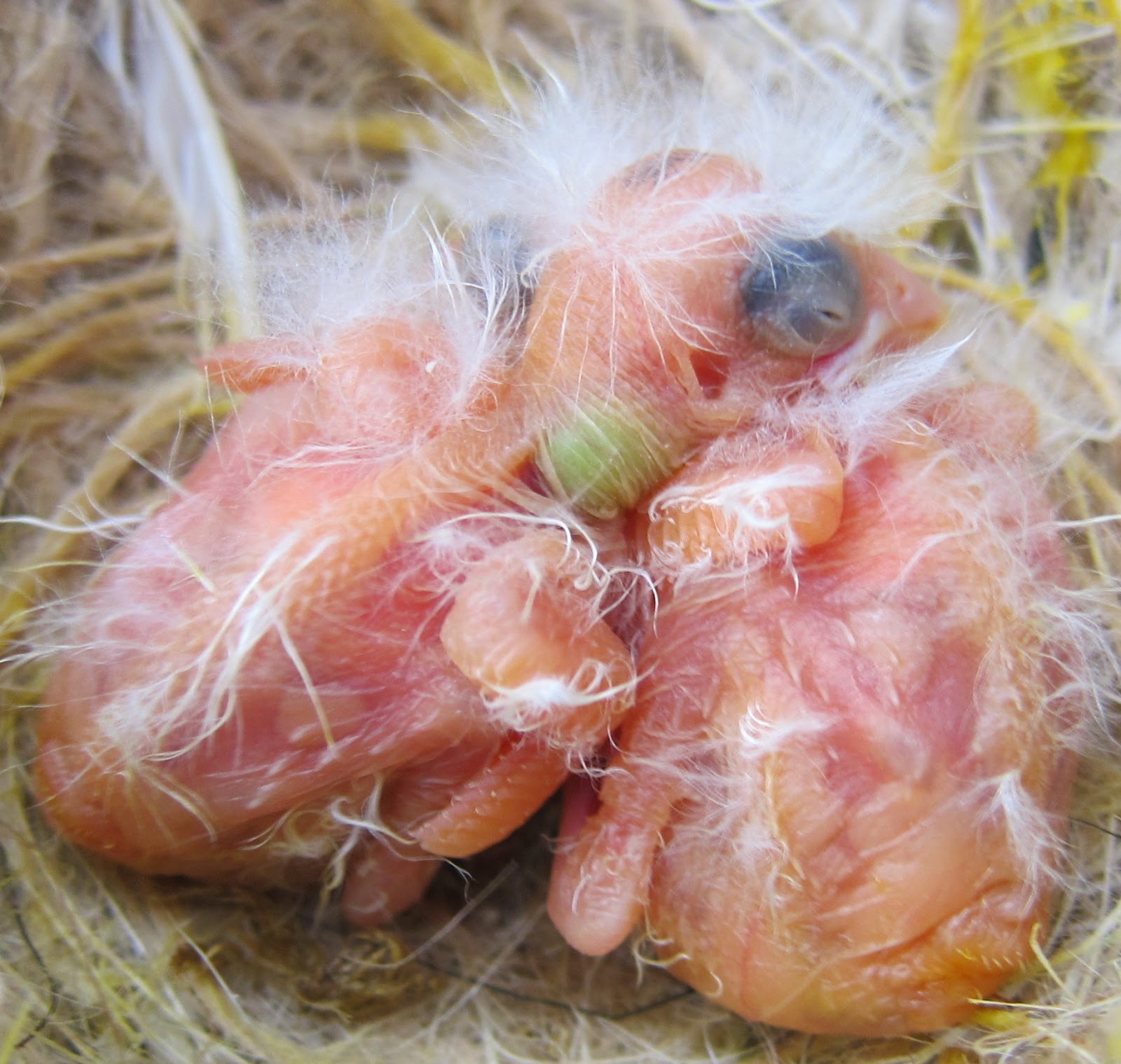 One hour later and the improvement is fantastic! 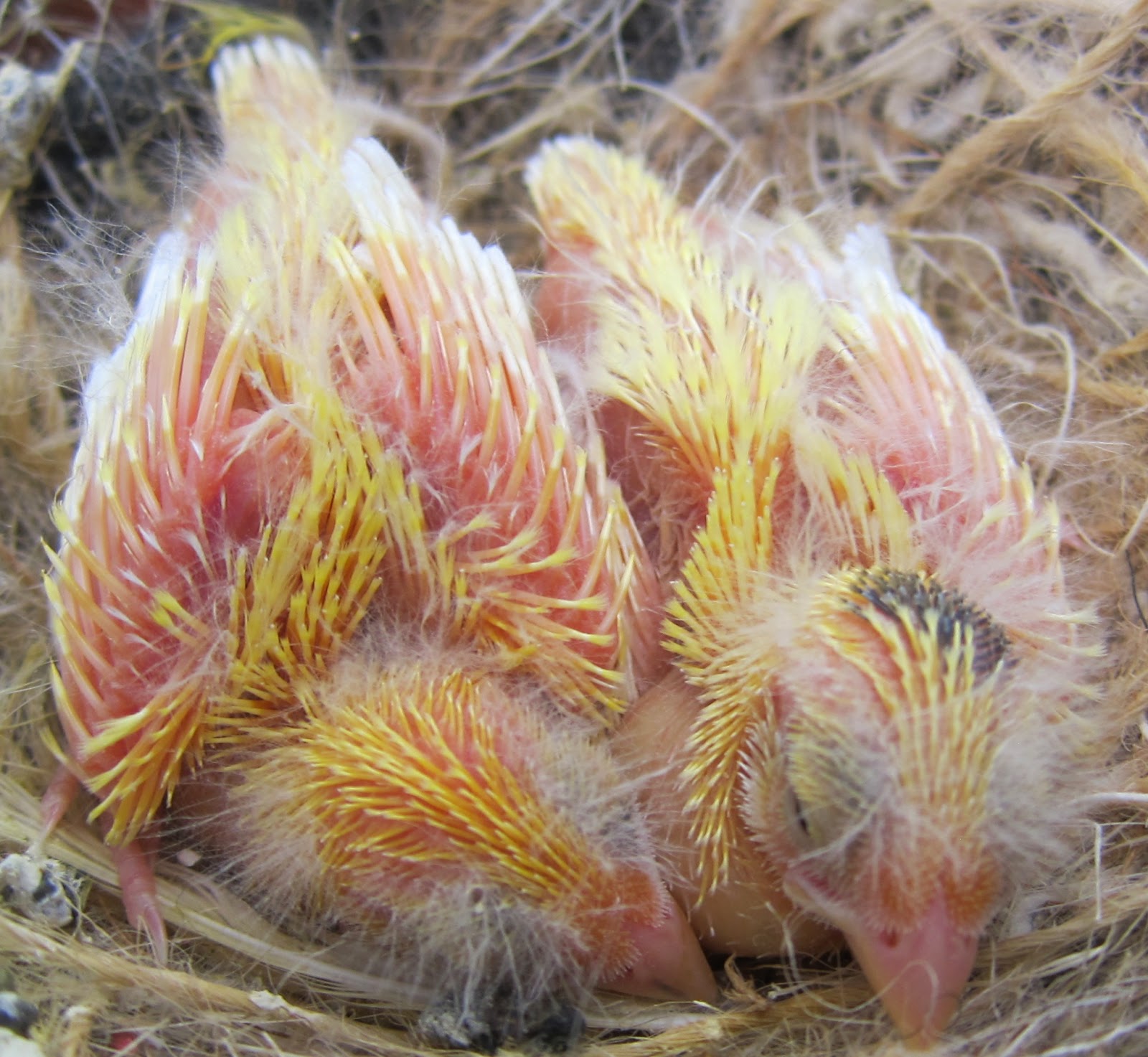 Bumblefoot is a general term for any inflammatory or degenerative condition of the avian foot. The condition varies from mild to severe. Looking at the bottom of the foot, you may see mild redness or swelling to deep open abscess.  It is prevented by using proper perches (never use the sand paper perch covers as this can cause abrasion), good sanitation of facilities, and proper nutrition.

When a bird favors a foot and sits around on one foot, holding the other up, take a look at the foot. Is it red and swollen or do you see an open sore? If it is just red and swollen, immediately drop dietary protein and feed lots of greens and even the next day, if that is the cause, on a low protein diet and the bird will stand normally on two feet and the redness and swelling will be gone.

If you see an open sore, dip the foot a couple of times a day in an iodine solution until healed. In canaries, bacteria such as Staphlococcus and Klebsiella may result in a deep abscess. Oral antibiotics or antibiotic ointments are not effective for bacterial infection in the foot but the iodine dip will get rid of the problem. 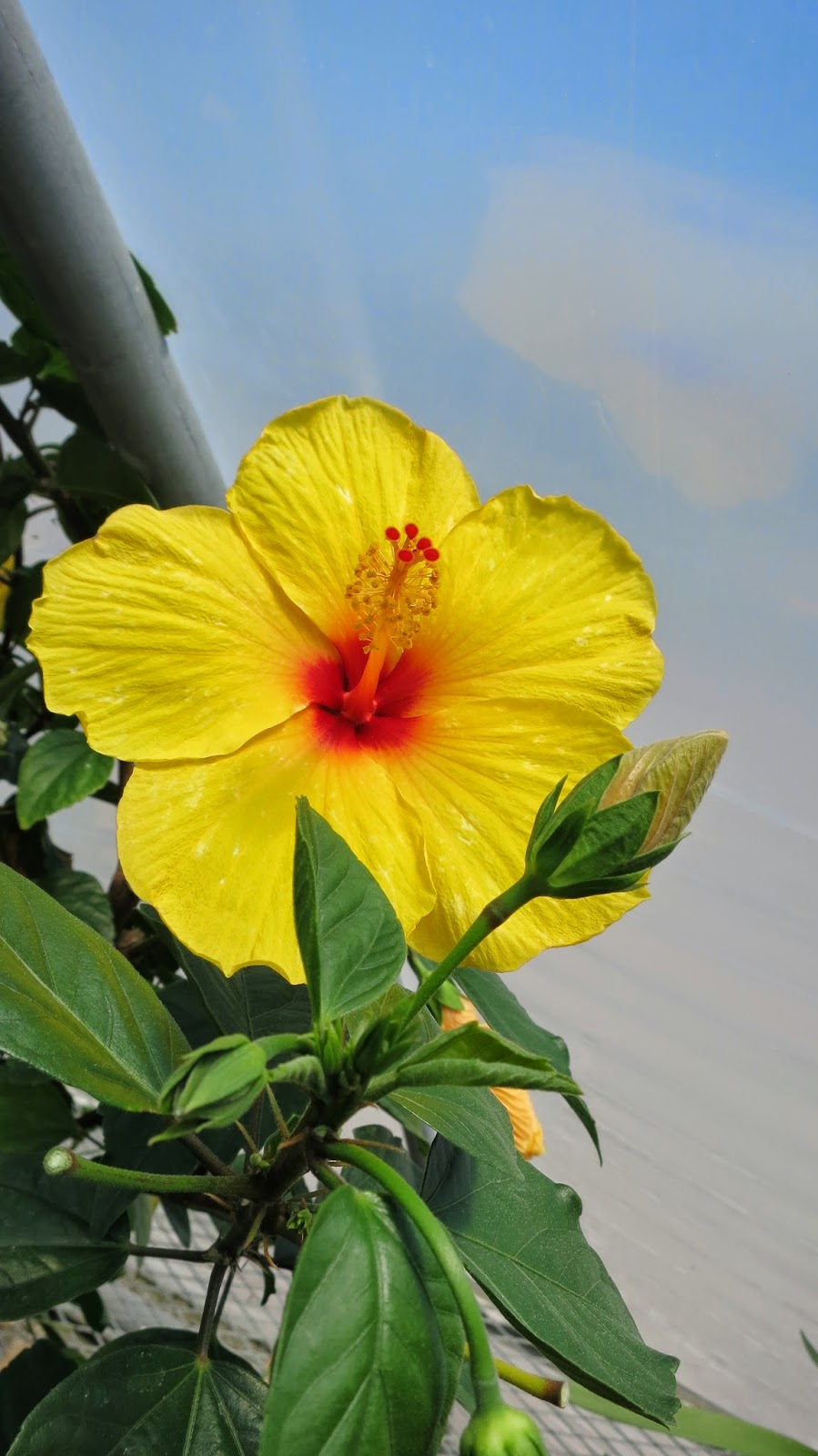 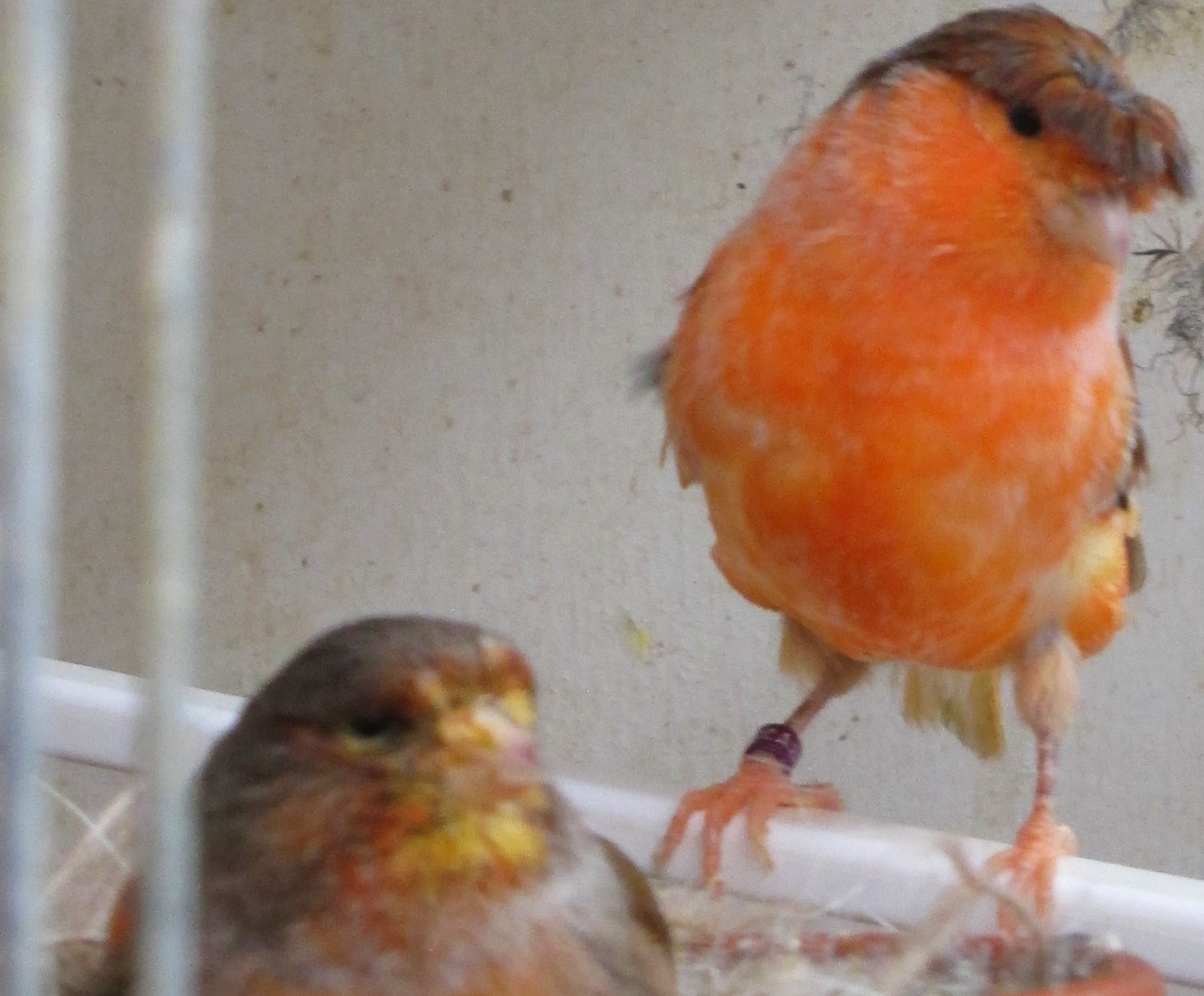 On April 1st, 2014, I posted the first round photos of this Stafford male with a big dilemma. He had two lovely hens and they both hatched four chick each on the same day! He was a very busy papa running back and forth from one nest to the other! 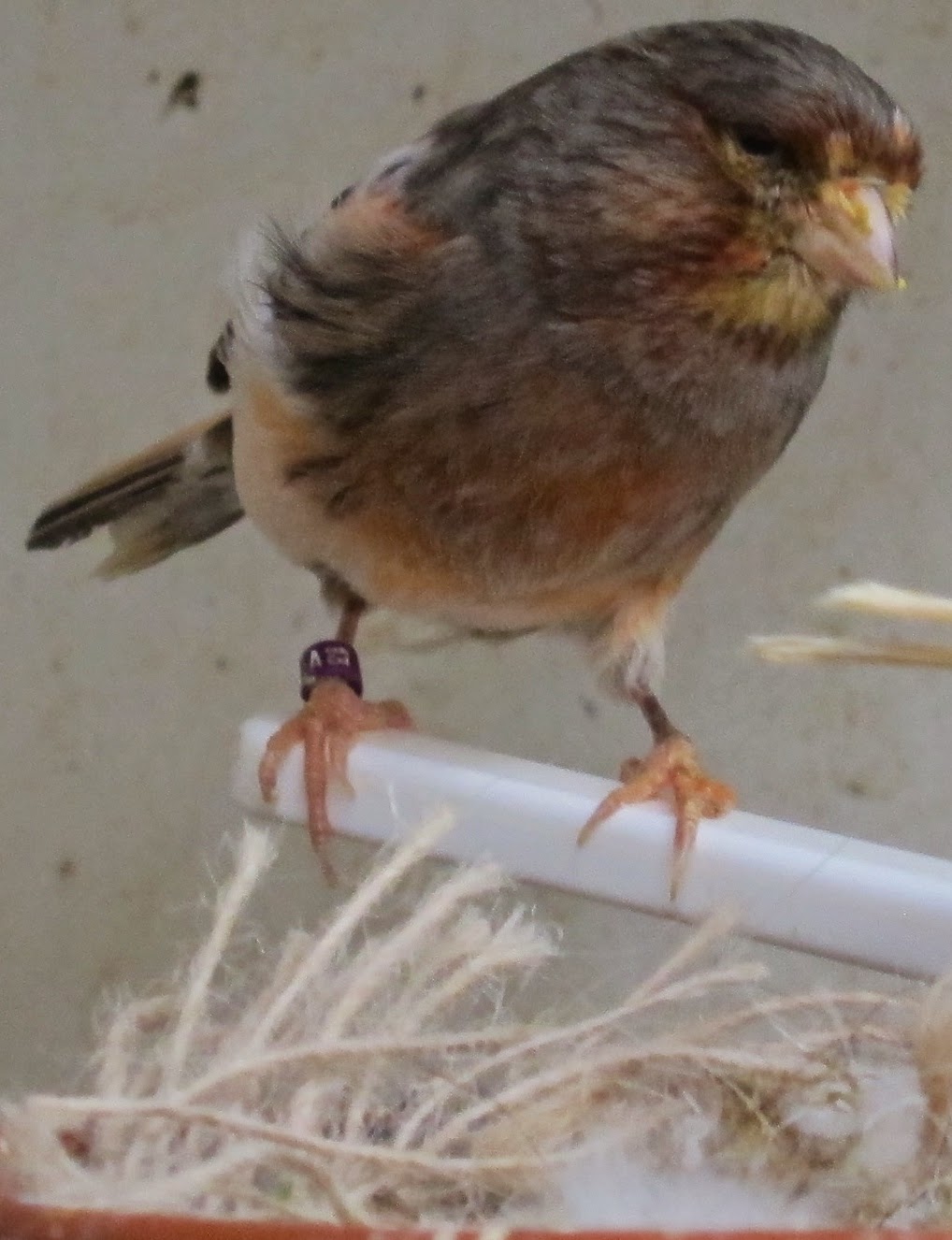 Round two and the hens switched sides of the cage and each hatched three chicks on the same day! 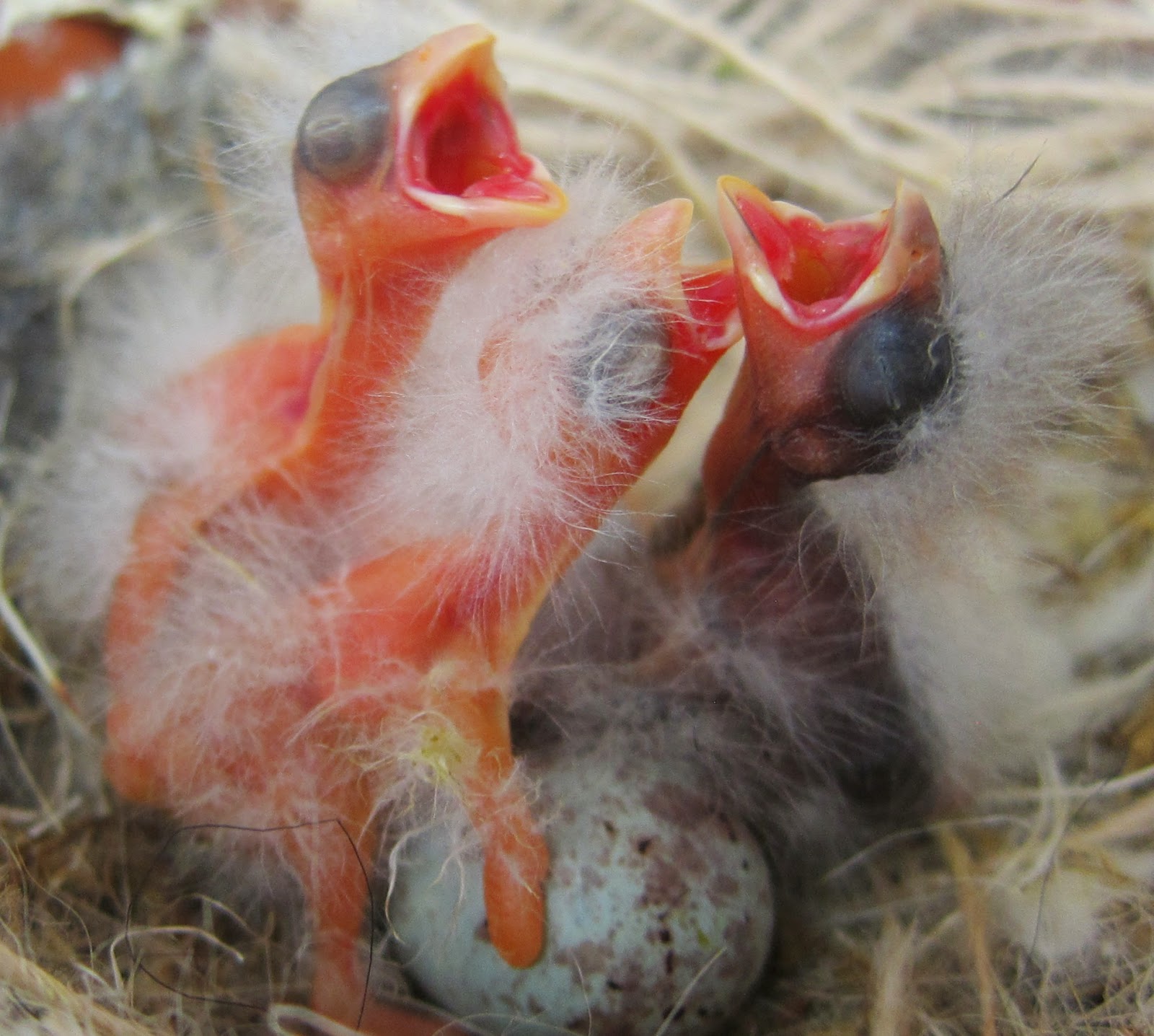 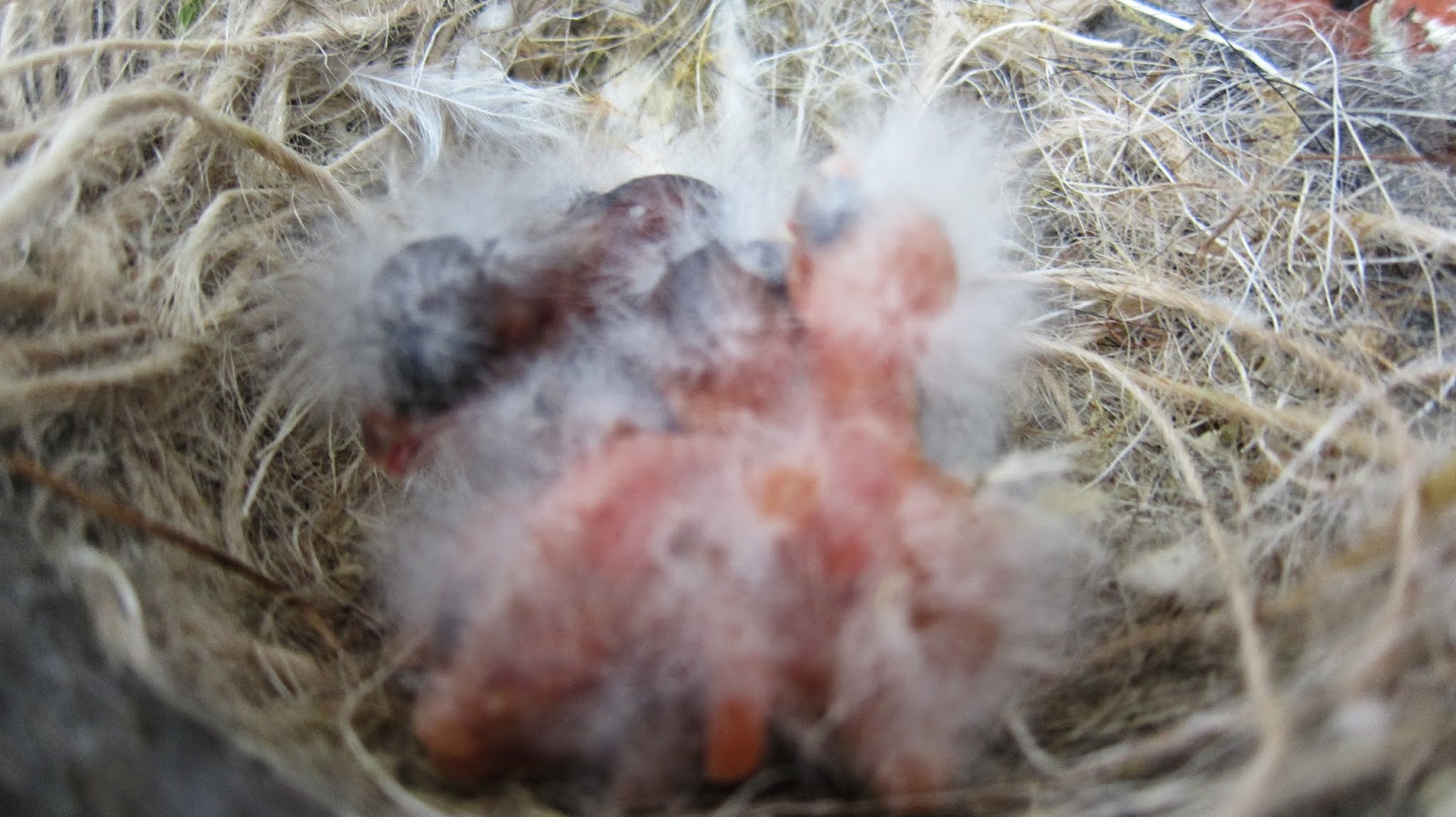 But once feed they are content and back asleep. 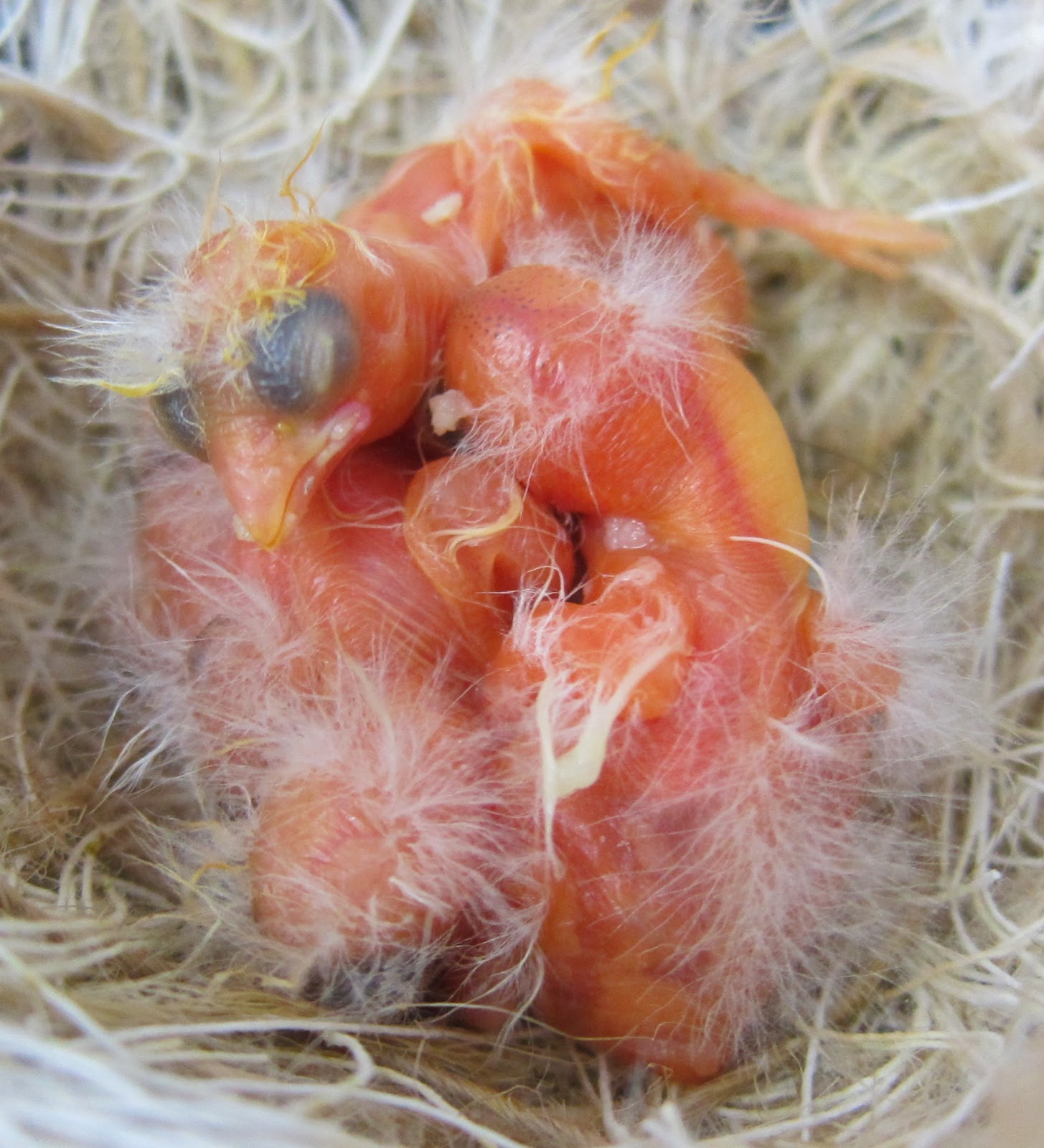 Likewise the mosaic hen hatched three chicks also! I notice her chicks are growing a little faster. Papa better watch out or the variegated hen is going to get her feathers ruffled! 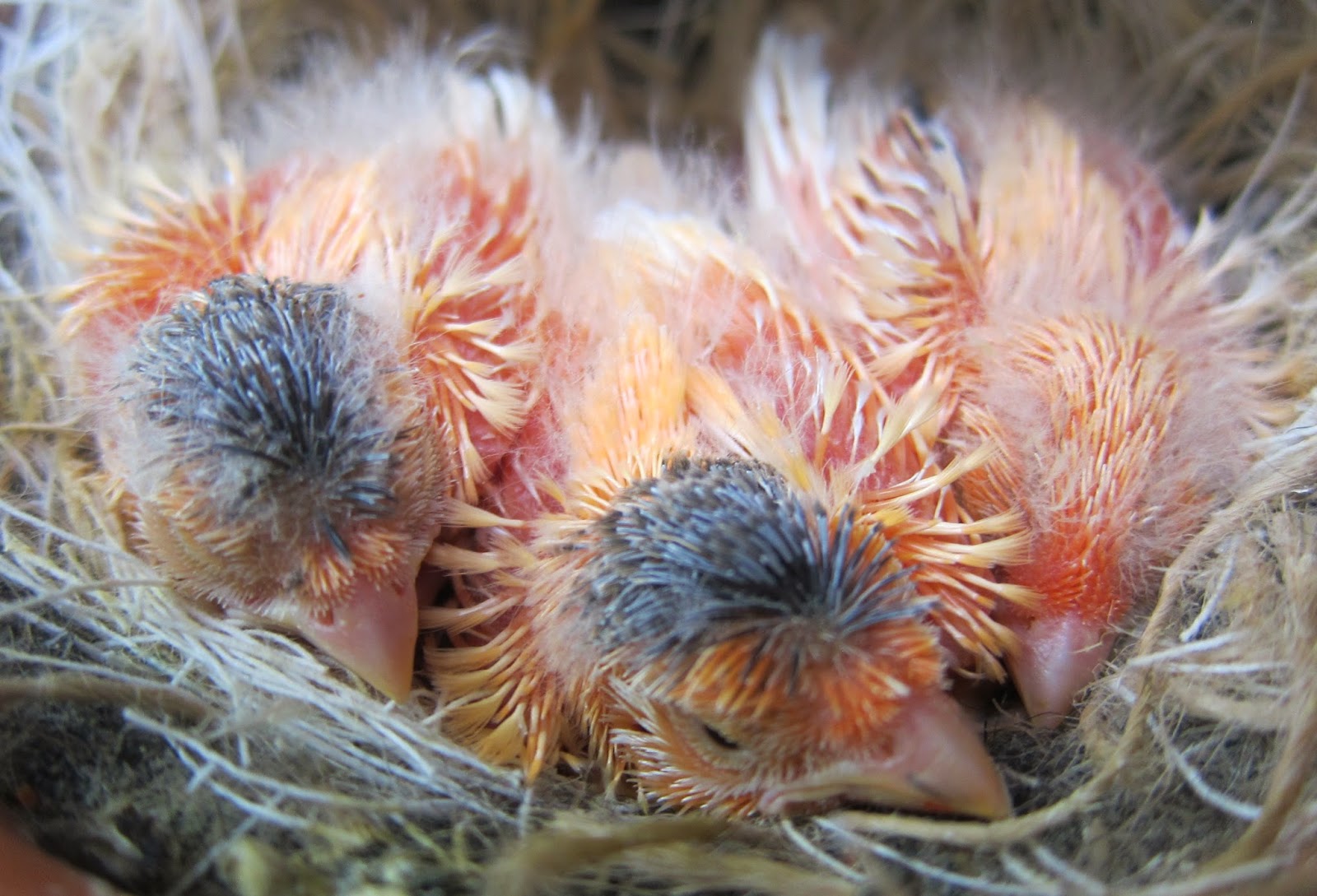 Sure enough her chicks banded a day earlier! 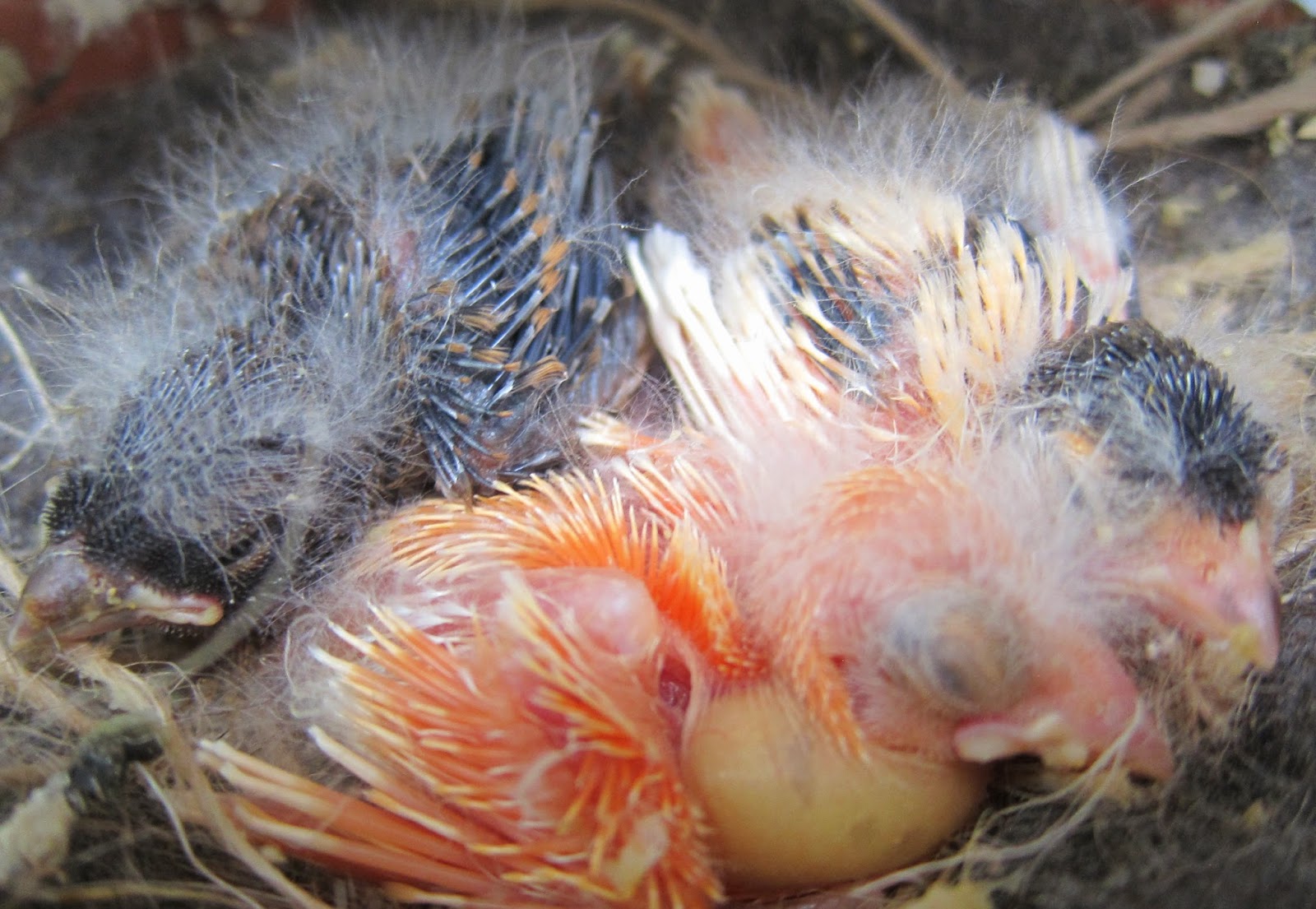