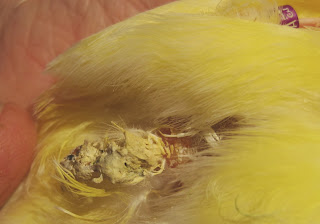 It is important to catch a pasted (caked) vent early because as the excrement accumulates the vent will become totally blocked preventing defecation and in time the bird unable to defecate will die.

The signs may be as subtle as seeing a bird stay on the cage floor or dropping its wings or noticing a small mass in the vent area or the bird may be straining while moving its rump up and down trying to relieve itself. Taking care of it promptly is important but before removing the mass note its color and whether or not there is an odor.

To prevent vent injury carefully rinse the area with water and remove the mass. When the dried excrement and associated feathers have formed a solid mass that partially or totally prevents defecation, once removed, the bird will promptly produce a voluminous stool because of all the obstruction.

Numerous infectious agents including bacteria, yeast, fungi or parasites as well as dietary issues can cause a pasted vent. If the color is dark green the starving bird may have a yeast (Candida) infection or if the mass is hard and black colored it may have a low grade megabacteria infection. A creamy color indicates urates (urine).

If the caked dropping reveals a sweet or pungent smell, bacterial infections such as E. coli, Clostridial, Streptococcus or yeast infection may be the cause. If there is no unusual color or odor, as was the case with this bird, I looks for dietary causes. Photo colors are off a bit as it was cream colored and not yellowish.

Is the bird losing weight? Have you changed the amount or kinds of extras? Are you feeding too many rich seeds especially Flax or possibly Sunflower chips?

I have put it on Dr. Rob Marshall of Australia's KD Powder in its water for a couple of weeks and added soft bread twice a day, unlimited oatmeal or steel cut oats, dry Biodecken novafood (nestling food) and eliminated flax and greatly reduced sunflower chips and  offering couscous with quinoa and extra poppy seeds which helps naturally stop diarrhea.

Update October 5, 2013
After starting on KD Powder and dietary changes, no more caked vent and the bird seems in perfect health!
Posted by Linda Hogan at 8:56 AM 2 comments: 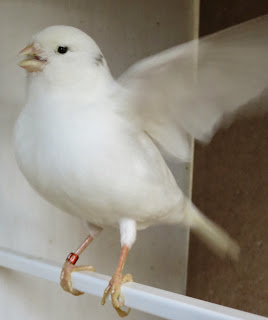 In spite of the fact that our birds inherit important determining genes from both parents,  exciting research in epigenetics has recently shown that these same inherited genes can be turned on and off by exposure to environmental factors such as diet.

It seems that when enough methyl groups (which consists of a carbon atom bonded to three hydrogen atoms) attach to a section of DNA or a histone (a protein that DNA strands can wrap themselves around), a gene can become less active or turned off.  Or desirable genes can be switched on when enough acetyl groups (which consist of two carbon atoms, one oxygen atom, and three hydrogen atoms) attach to histone.

Genes turning on can produce remarkable results but likewise silencing an undesirable gene can also be a good thing if blocking means better health. I dream about the implications of gene control facilitating good human health and disease prevention but I also dream of how understanding and controlling our birds genes could produce the perfect bird, we all strive to produce, but we just aren't there yet!

For now, I must be content to keep a close watch my birds and look for feather changes that I can be attributed to what I am feeding them. When you get their nutrition right, genes do their thing and the results is improved feather quality so much that the feathers hug the body like a glove and even look more intense and even confirmation lines dramatically improve.

Take a look at the Border show standard. The beautiful confirmation lines of a show Border are only reached when good birds achieve perfect health. Even a day later after supplementing with the right vitamins, you can see their heads and backs round and suddenly birds that you thought were not even good enough to take to a show, when the genes are stimulated with the right vitamins, these same birds magically look like real winners! 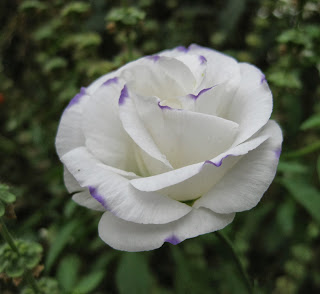 Hopefully you have never had a bird with feather cysts aka feather lumps. Unfortunately, I have one old bird and three young ones with feather cysts. They are all out of mosaic lines and look just like the ones appearing in an article on the blog from Dec.29, 2009 called Removing Feather Cysts.

I am trying an experimental treatment on these birds using Biodecken Molt. Starting today, I will be giving BioDecken Molt in the water for 15 days. This product is high in methionine.

The first bird I found a few weeks ago  had lumps on both wings and a huge one under the skin in the tail. I removed his lumps and he got a few treatments with the other birds with BioDecken Molt but I was focused on feather tightness and quickly lost tract of his lump problem.

Today when I found the other birds with lumps, I examined him again and the tail lump was totally gone and only clue about his previous problem was one thick feather on the right wing butt! So Big Bird is jumping in and an experiment is in process. I will report back in a couple of weeks. The preliminary first bird results are very encouraging.

Kale To The Rescue 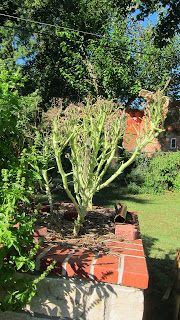 This year we changed the garden to three elevated counter-height beds. And instead of planting 10 to 12 broccoli plants, I only planted four. 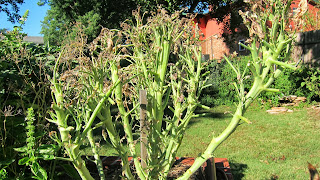 With bugs and Big Bird using the leaves, the plants are completely stripped! A real crises as my birds are still eating the green egg less nestling food made with broccoli leaves. 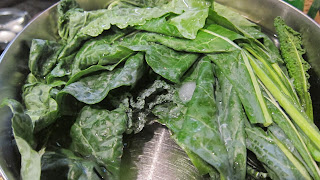 This morning at the Farmer's Market, I bought Kale. Unfortunately, after being at the outdoor stand, it was not as crisp as I would like so I emerged it in ice water to crispen it up a bit. 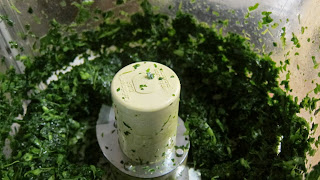 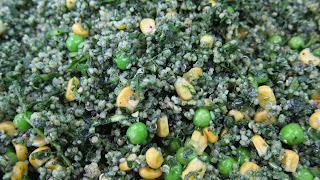 Young Border male was quick to find the pieces of Kale! 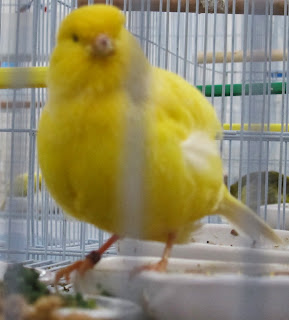 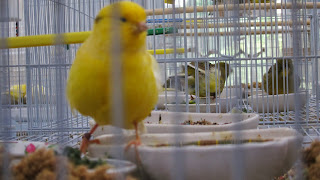 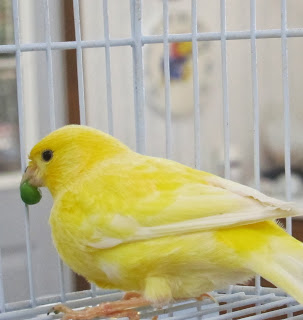 A young German Roller male picked out a pea and was pacing the cage trying to keep it away from his brothers. With a chest like that, I can't wait to hear him sing his full song!
Posted by Linda Hogan at 9:34 AM 4 comments:

It's Fall again and when I looked at my supply of Boost 250, which I use a lot this time of year, I was down to just one unopened bottle which I ordered from the UK in 2012. Surprisingly it was still not expired but I like to have more of this amazing product on hand.

So after searching the web for a US source and not finding one, I wrote Dog Health to try and locate a US sources for Boost 250.

EBay is an easy way to order a bottle or two, great for US, Europe, Canada and Australia but if you want larger quantities contact glyn at glydavies@doghealth.co.uk.

This is a fantastic product for show birds as it tightens their feathers and also for song canaries as it hastens song development without bringing harshness!!!

While visiting our pastures and my brother Larry's farm, on the edge of his vegetable garden was several patches of unwanted Johnson grass. Assuring me that it had not been sprayed, I picked all he had for my birds. 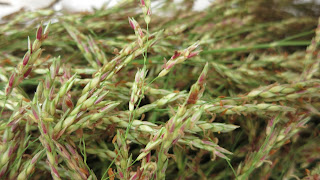 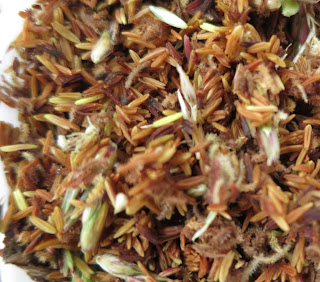 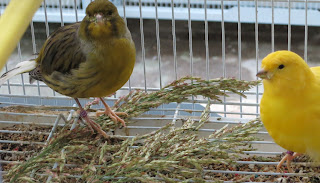 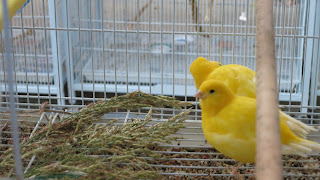 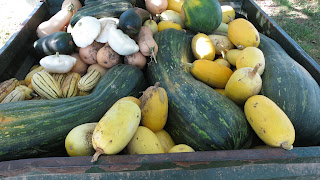 We also selected a number of squash from his pickup bed. 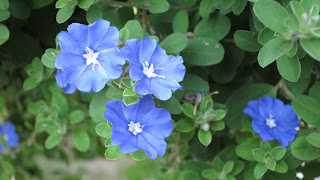