Visit to Ted's Aviary in Modesto 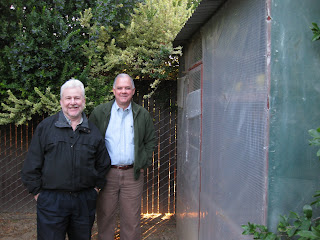 On the way to the airport Sunday morning, Ted stopped by his house to show us his operation. Ted, pictured with colorbred judge David Benites, houses all his canaries in an outside aviary. Protective covering or mosquito netting is used to protect from mosquitoes bites which might carry canary pox. 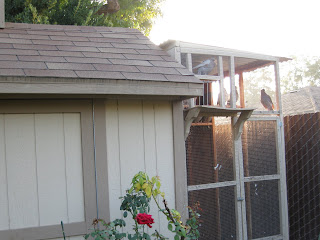 On the other end he houses his pigeons! Many canary breeders, like myself, have or have had pigeons. In my case, I raised them during my high school years. Every time we went to Emporia, I would manage to get them to stop and get me another pair! I was was especially fond of modena pigeons but always was justifying with my parents that I just had to have a new kind! When I went away to college, my parents caught all my pigeons and could not believe that I had raised or acquired over 100 pigeons! In the small town I were I was raised, population 300, neighbors did not complain about my birds which flew loose during the day and returned to my pigeon house to roust. 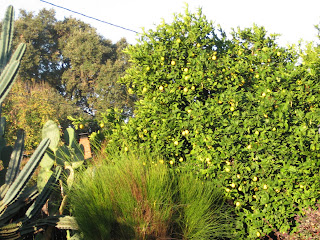 Lemon Tree in Ted's back yard yield some tasty lemons that I carried home in my carry-on bag!!
Posted by Linda Hogan at 1:33 AM