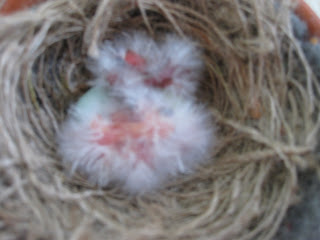 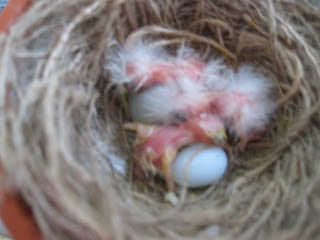 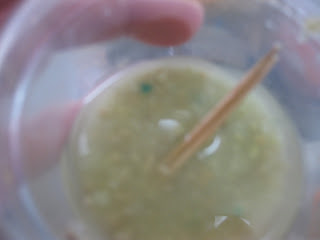 Observing when chicks are not fluffy is a heads up for saving chicks!

The top photo is a nest of five chicks which hatched this morning, all curled up in a ball. Notice how fluffy they appear and what a nice rosy pink color. These chicks are doing fine and outside of adding three plastic eggs to the nest because the nest is a little too flat, no intervention is necessary. Just privacy is all they need! (Remember the Stafford cock called Gator Heat from the contest, he is the proud papa! The other hen in the cage currently has three chicks but may hatch another one or two.)

The middle photo is three German roller chicks two which are marginally fluffy (hatched this morning, I prefer the fuzz to stick straight out), but one is not fluffy (chick hatched yesterday) and its color is a little more yellow in places like the wing butt and frontal part of the head. Its back is sunken in like it is getting emaciated. The first 24 hours, the chick can live on the absorbed yolk, but after that mom must feed it.

The emaciated roller chick is not being feed and if it is to be saved, I will need to give it a couple of hand-feedings a day for a couple of days. For hand feeding, I make a very liquid mixture of just ABBA green 92 (ABBA Products) and warm tap water (bottom photo). I use two toothpicks to deliver the food to the chicks. You can see in the photo some food in its crop as I have just finished feeding it. I first learned this trick when I was first learning to breed borders and it works fantastic and is so simple to use.

To get the chick to eat you can jiggle the nest a bit or I like to touch it in the upper neck region immediately below the beak. I just gently touch the chicks neck and move my finger gently up to the beak. It is amazing how that touch and movement toward the beak makes them open their beak!

If gentle massage from the upper neck to the beak doesn't work, it is because the chick is in real danger of dying, I then will pry the mouth open with my fingernail. Sometimes it takes me and my husband to get that one sickly chick feed, one to pry the mouth open and one to use the two toothpicks to scope food into the chick's mouth! Even these chicks, that are too weak to open their mouth, can be saved. I try to intervene before it gets to that point however.

Overall, I much prefer the mother to feed the chicks! They grow much better when she feeds but I also intervene when she fails to feed an adequate amount because after a couple of days of my supplimenting, she will likely feed adequately. Till the chicks are banded she gets the 1/4 quarter hard boiled egg and egg food but no greens. If she will feed even a bite or two of the hard boiled eggs, the chicks will thrive! If I see the hen is eating the hard boiled egg, I know she is likely feeding it to her chicks!
Posted by Linda Hogan at 11:41 AM