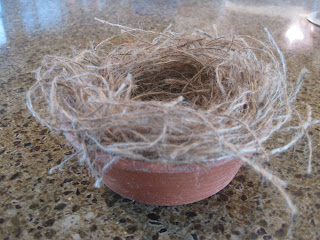 Why don't you just do what I want you to do?

The one thing I can count on when I leave the aviary for a few days, as I did this weekend to attend the NCBS Board meeting, is that some things will progress without me just fine but other things will be a disaster! This time was no exception, on the plus side a border couple in the high tier, went right on with the plan, the cock feeding and being attentive but not bothering the nesting material, and the hen laying and setting as expected. The only problem is that since I was gone, the eggs were not removed and come hatching time. likely the eggs will hatch over a three day period giving some chicks an advantage and the last hatched a disadvantage. As I refilled their dish of hemp seed this morning, which they get free choice when the hen is sitting, my face passed close to the nest. I was really excited when I could feel a warmth coming directly from their clay nest! At least something went well without me!!

My husband does feed and water while I am gone, and I do not think complaining about his care is a good idea but one of the cages with three of my German imported original hens, was unable to get to their water as the container was nearly falling away from the cage. A quick look and I could be a slight eye squinting, a sign of dehydration, corrected quickly once I replaced their water. I really hate it when something like this happens but it is an accident and but if I were there it would have been discovered in just a few hours not 24 - 36 hours later...I replaced the water container and changed the placement so it is unlikely to ever happen again. Although the dehydration squinting corrects quickly, it is a concern because I have heard of poultry operations who deprive birds of water to precipitate a full molt. Certainly, I would never do that deliberately. I found this on Sunday, and I have not seen any long feathers on the cage bottom, the first sign of a full molt, so looks like this one is going to turn out OK. Oh well....all is well that ends well...

Before I left town, I had noticed that although bachelorette had a well-developed vent, she had not built a nest. So I said to myself, "looks like she and shocker are taking their time and that is great"! Wrong, Sunday I discovered that in the front corner of their high tier cage, she had laid four eggs on the floor with almost no nesting material... and under her clay nest!

Well the fight was on and I tried to convince her that if she tried her nice clay nest, she would love it. I even offered to compromise and make her a nice floor nest. The picture above is the nest I offered her but compromise is not in her nature!!I have offered floor nests on occasion and had some success with other hens immediately accepting it, but not this hen!!

I also moved her clay nest and all perches to about an inch off the floor and in desperation I removed the two perches closest to the nest. Well she was not impressed!! So OK I finally told her, OK you win, I concede to you, but there are consequences for this young lady!!

I foster her eggs to another Stafford hen and if I had an empty flight I would have tried Doyle's approach, but lacking a flight, I decided to stop her floor sitting by changing the environment in her cage. Everything was moved to different positions etc and she looked at me like she thought I had gone totally nuts!! Assuring that I had the last word, I started her back on the weekly vitamin E in the water to encourage her to re-cycle as Doyle suggested.

Well, she is not sitting on the floor anymore and I am hoping she will build a proper nest next time. I just hope this soap opera with her is over!! If you have the opportunity to place bets, better bet on this hen every time!!

Moral: The more priceless the pair, the more you will pull your hair!!
Posted by Linda Hogan at 7:44 AM

I have also had of these stubborn hens! I can suggest that you try the following if it happens again. My border hen also refused to get into the nest, and I took a desert dish one that is about the same size of a nest pan and stuck the underfelt into it with wood glue. I then took out all the perches and any place that she would like to sit forcing her natural instinct to perch on something, she was forced to perch on the side of the desert bowl. The nest she made on the floor was gently lifted and placed into the desert bowl which was submerged into the sawdust about two/ three cm. Istead of putting her eggs in there I put three plastic eggs in and fostered the originals. When she saw this she immediately took the desert bowl. You will find that they normally do this for two reasons I have discovered: 1 because we take too long to place the nest pan and when they start shuffling they take a corner. 2 they want some privacy - you'll probably notice that she has taken a front corner so that she is somewhat hidden by the seed hopper or so that whilst setting she is hidden by the front wall of the cage. Once the desert bowl was in, I took a piece of cardboard and attached it to the section where she wanted to set, with the privacy, she was convinced. Such hens are normally also nervous feeders, so I just leave them alone and try not to bother them too much. The weird thing is if you let her recycle, and give a nest pan earlier next time, she will take it with no problems! My bet is that she will be fine in the next round!