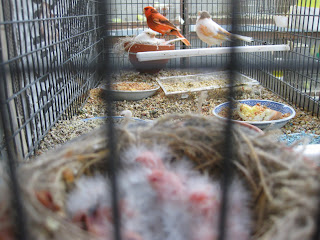 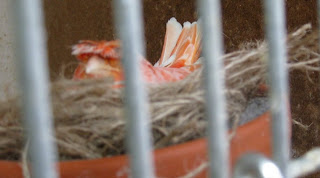 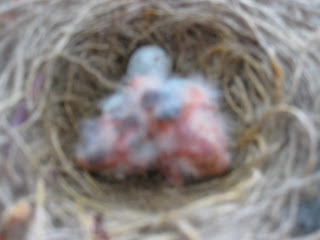 Outside of the ice and seven inches of snow, we escaped the major blizzard and today is gorgeous with highs today 52 and later in the week to reach 70! Normal high for now is 62. That's Kansas Weather for you!

When I came back from the NCBS board meeting in Tulsa, I found Bachelorette had laid three eggs directly on the corn cob floor. She was not even covering them with nesting material or feathers... So I foster those three eggs and the fourth she laid the next day on the floor. The chick photo is the two chicks from Bachelorette and Shocker and are doing well! One chick is variegated like Shocker and the other is clear and favors Bachelorette.

Bachelorette has recycled and built a regular nest and laid again. I was so anger with her for laying on the floor, that I promptly started her back on the weekly vitamin E in the water treatment. Hind site tells me I should have waited a week as she did recycle appropriately but it was too quick so she had the last word and only laid two eggs. From two cycles she has only laid a total of six eggs. I will slow her down a bit by letting her raise a couple of chicks and letting her and Shocker go one more time. Third time should be charm for her!!

The nest mates of yesterdays crop impacted chick are doing fine. No diarrhea, or wrinkled abdomen and I see a hint of fat being deposited under the skin on the rump and the droppings are completely normal in form and correctly encased in the normal fecal sac.

Likewise the chick that was not fluffy like his marginally fluffed nest mates on Thursday, is doing fine. I hand fed them twice a day for two days only with a thin mixture of ABBA Green 92 and tap water. Tip for hand feeding: when a chick is full, it will expel the fecal sac, do not over feed, you want the crop to empty correctly and not impact. The nest mates are now fully fluffy and the previously naked chick has some fluff especially on his rump. It will be fine without any further hand feeding.

The chick that was found on the cage floor looks exactly like his three nest mates. So everything is going well!

Gator heat has two hens, one with five chicks and the other four. Today, he is helping feed both nests! What a good papa he is!!! The top photo is Gator Heat and his hens and chicks. He has finished feeding the nest of five in the foreground and has moved to the nest of four to finish the job!
Posted by Linda Hogan at 9:41 AM

Linda,
Is that corn cob onthe bottom of your breeding cages?and how often do you change it.

Yes that is corn cob on the bottom of all my cages. During most of the year, I try to get it changed once a month to once every six weeks. During breeding season, I change it at pairing and then do not change it as long as the pair is breeding. While the hen is sitting, I occasionally pick up any large soiling etc. I think the less we bother the birds the better! The disadvantage of corn cob is it molds if it gets wet. So outside baths are used. Linda