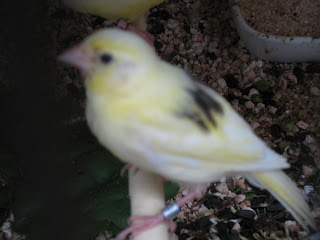 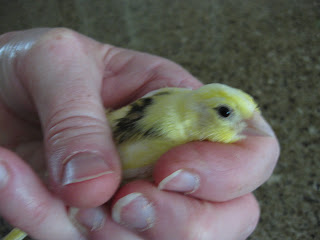 What's Is A Bird in the Hand Worth??

Bird on the Loose

It has been a frantic few days for me. Not only have I been working 2nd shift everyday, but trouble hit in my aviary! Only running blood to a level 1 trauma at work could get my mind off of my lost bird!

It all began around 9 am on Saturday. I had fed at 6:15 am as usual and was making the rounds to offer cous cous mix (cous cous, quinoa, grated fresh carrot, poppy seed), when a recently weaned saddle backed marked German roller, flew out of its cage!

I allowed the bird to escape because last year, a young bird tried to fly out of the cage and I quickly prevented its escape by shutting the door in its face. My fast action tragically resulted in a broken neck and a dead bird in minutes. So after that I just keep my eye on the escaping bird and promptly run over and catch it. Countless times this has worked but not last Saturday!

This time, when I got to the bird, and bent down to catch it, it flew out of sight behind me. I immediately turned around but I could not find the bird! Where could it be?

It is not unusual for chicks of this age to try an escape. Many chick having left the nest are anxious to explore the aviary. But as a general rule, they fly to the top of cages where they are easily spotted and caught. This bird, likely a female, uncharacteristically flew to the floor and then vanished! And with her disappearance, my frantic search begun! Sometimes they fly toward the light of a window or opened door.

Once a hen who was feeding three chicks, flew out of her cage and out the front door. Many people when faced with a loose bird outside, place a cage with food and water outside and hope the bird will come to it. But the best thing to do is grab the garden hose and squirt the bird. Then you can easily catch it. I used it on the canary hen and immediately had her caught and back in her cage, but wet! I even used this trick on a macaw which got away from a neighbor and flew to the very top of a large tree. My son climbed as high as he could with a garden hose and squirted the macaw which safely tumbled slowly down the branches till the owner could reach it!

But a garden hose won't work if you can't find the bird so I opened every feed sack, looked under every cage, check the sky lights, under the refrigerator, behind the large unit cages, in the plant stand, and literally turned the aviary repeating the same searches over and over. In spite of my intense four hour search on Saturday, at 2 pm I had to leave for work, without catching the feathered flying Houdini!

Sunday morning, I did the early feeding, and went to 7:30 am mass but then promptly repeated all the same searches as Saturday for another about six hours. My daughter Kellie, the attorney, advised "Mom you just have to accept the fact that you tried your best and it just was not enough." Eventually, I might accept her advise as it did bring me some comfort to know that I had give it my best effort under the circumstance, but as long as there was hope that the bird was alive, I was going to keep trying!

Each day in a birds life is like seven days in human life. I knew it would not starve to death this soon but dehydration can cause death in a few days. I placed several dishes of water around the aviary both on the floor and on the top of cages but by 2 pm I had to go to work.

Monday was another day of repeat searches and around 10 am Doyle called. I knew he would understand. He said that even in his aviary with pretty much just cages, a bird escaped him for three weeks. He also had water out and eventually caught him by leaving some cages open with food and water. I had used that method before also but with all these chicks, finding a cage to empty would not be easy. So I set up a free standing cage with food and water and left its door open.

Finally it was 1 pm and as I was trying to decide what I would do with the remaining hour to find the bird, I looked up and there on the highest cage set Houdini, the saddle back marked German roller! Prayers of thanksgiving for Houdini and the blessing of all my birds poured from my heart and lips!

Houdini had slightly squinted eyes indicating some dehydration and had lost a lot of weight but he was alive and very savable! I moved him in with three recently weaned border chicks and today he looks thin but almost as good as new!

Check out the comments on this posting for a great idea!
Posted by Linda Hogan at 6:30 AM

Linda
Loved the Houdini Commentary. It is such a pretty bird, I might have to trade you out of it !

I am so happy you have your bird back. Last week the weather was so beautiful here that I had my birds outside. I wanted to wash the bottom of the cage with the hose, so I carefully removed the bottom to clean, and out flew my pretty canary. I started to panic, I was so upset with myself. I couldn't see her anywhere! I had a male canary inside the house her mate, lover. I brought him outside he immediately started to sing and call to her. She sang back! She flew to the top of the cage! I slowly walked to the cage and carried it ever so slowly inside.
Never ever again will I clean a bird cage outside, unless no birds are inside. I feel very very lucky to have her back. Thank you for sharing your story with us. Taline in Toronto.

One of best things I have ever learned is the art of tossing a chiffon scarf over a loose bird. It works every time. You can see the bird, but it cannot fly up once the scarf has settled over its back. My birds have consistently flown to windows or curtains, or up into the top of the house, to sit on the railing on our catwalk. I just wait until they go exploring, and then quietly walk up behind them and toss the lightweight, transparent scarf over them as they cling to any object.

In the 45 years that I have raised canaries, I have had a lot of interesting escapes --once 26 young birds found a loose bar in an aviary cage and sqeezed through every day, until I found how they were getting out. The scarf worked well then, too. But the toughest rescue was a cage full of young white canaries being delivered to a buyer in the winter. When I got out of the car to carry them in, the bottom tray of the cage slid out, and all of the birds flew out the bottom into a large parking lot. That time, it took a lot of help to get them back (even complete strangers helped out!)-- but because they were cage birds, and not too good at flying yet, we recovered them all. The toughest part was getting them out from under the cars, where they hid from us. Needless to say, I now tape all sliding trays, cover all small openings, carefully wrap ENTIRE cages, and wire all doors shut on transit cages as a result of that experience.

Thanks so much for contributing!

I remember once when you were out of town and I was taking care of the birds and one flew outside! I went out and it was on the neighbors roof! Dad scared it with a broom and it flew past me and I held out the big net and it flew in! I got lucky!!

Some things are better not known. That last post was a confession of my oldest daughter Sandy!