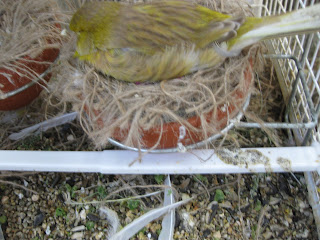 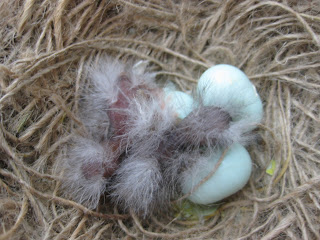 What Should I Do Now?

The buff cinnamon variegated border hen hatch two out of four eggs, one chick yesterday and one today but on the floor around her nest are three flight feathers and a few smaller feathers. Getting borders to feed can be tricky, not alone a molting one, so I weighted the options.

If I leave the chicks with her, her hormones could reverse providing she start feeding the chicks. So it might work but only if the hen has a strong feeding drive.

On the other hand, I have the cinnamon variegated border hen whose eggs were so thin that they broke when she set on them. She is still sitting because I gave her plastic eggs so she would continue to sit and not keep laying. She had fostered a border chick this season and last season she hatch five out of five eggs and raised them well.

When choosing between a maybe and probably work, I will always choose probably, so yesterday I moved the first chick to the foster hen and today I moved the second. I could have moved the fertile egg yesterday but I know the birth mother has the right temperature to hatch the egg and I do not know that about the foster mom. It is true that eggs that hatch under the foster are more likely to be accepted but earlier this season the chick was moved under her and she raised it fine.

I have three plastic eggs in the nest to help support them. The chick moved yesterday appears to be nice and fluffy, a good sign that she has accepted them.
Posted by Linda Hogan at 9:54 AM