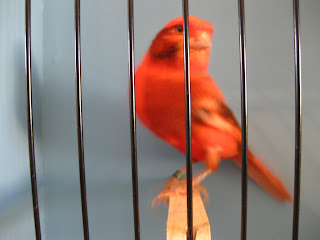 Beautifully Colored Stafford Gator Heat, Fathered 19 Chicks and Help the Mothers Feed Every One of Them! 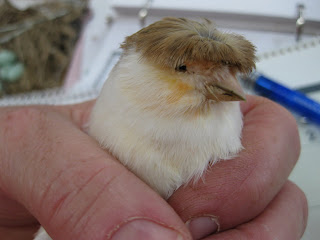 Fawn Variegated Mosaic Stafford Hen - Gator Heat's Last Hen of the Season. Good round crest, fairly good mosaic pattern except for face but poor red coloring. Since her face has more of a blush than a thin pencil line of color from the eye, she will produce good cock mosaic pattern but likely produce hens just like herself. 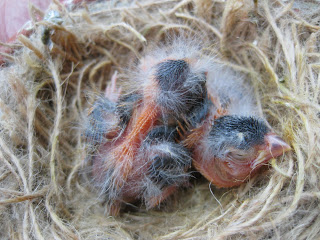 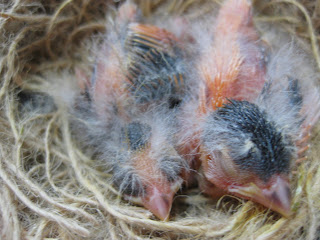 Gator Heat is a Proud Papa and a Great Father!

Gator Heat was purchased from Carl Bier at the Stafford Show in Tulsa, Oklahoma last year, for the purpose of improving the red lipochrome color in my Stafford canaries. Having only bred Stafford canaries for a couple of years previously, my crests look pretty good and nicely rounded but the red color in too many cases tended to orange rather than red.

I contacted Carl and ask for a pair with great color with potential to turn around my red color problem. I especially appreciate the pair selected that included Gator Heat, great color and proud stance, and Bachelorette great color and frosting pattern. Although that would have made a good pairing, I needed Gator Heat to produce more chicks than a single pairing with Bachelorette would produce. And as it turned out that was the correct decision as Bachelorette and I have gone round and round all season with little to show except she is one difficult momma!

By pairing Gator Heat to several hens, I will have a number of half brother/sister combination to select the best coloring and feathering to breed next year. He was paired in colony breeding style with two clear mosaic crest hens on the first round and produced nine chicks in their first clutch. He proved to be a wonderful feeder going from one nest to the other making sure the chicks were well fed. Only on this last round, when his previous hens were all retired, did I single pair him.

His production is a record for me when you add the fact that he not only fathered 19 chicks this season but helped each mother feed them all! I started out thinking I would colony breed but move him but when that first round yielded nine chicks with two hens, I decided he was needed to help feed! When those nine chicks were weaned, those hens were retired and new hens took their place.

My all time record for most chicks produced by a single cock in one breeding season is held by a German roller #1644 which was given to me and the late Janice Klein, in Wichita, and Norm who lived in Oklahoma City by the late Robert Gattus of Maryland. We only knew single pairing at the time and moved him first to my house, than to Janice's, and then we drove him several hours to Oklahoma City and when Norm finished we moved him back to Wichita to my aviary where he still produced a few more chicks. We were very careful to make sure his day length only increased and never dropped when we changed aviaries, and that he continued to get vitamin E and was given a couple of days off between hens whenever possible to maintain his fertility. When the season ended, he had produced 111 chicks!

But by far, Gater Heat is the Best Father Ever!!
Posted by Linda Hogan at 6:34 AM