Catching Up On My Reading - Irish Fancy 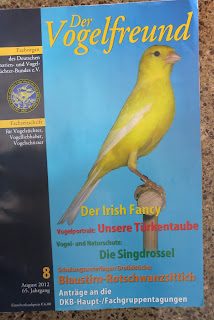 Since today was a cold day with a high temperature of 28 degrees F and a light snow was falling here in Wichita, Kansas,  rather than play ball outside with my dog Lucca, I decided to sit by the fireplace and catch up on reading some bird magazines. The magazine I chose was a special one from Germany.

When I was at the Northwest German Roller Canary Club show, Almin had a stack of these German bird magazines that anyone could take with them. Seeing the Irish Fancy on the cover, I knew this one was meant specially for me! To my delight, some of these Irish Fancy articles were in English! 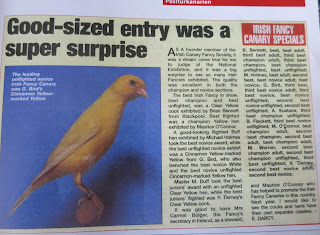 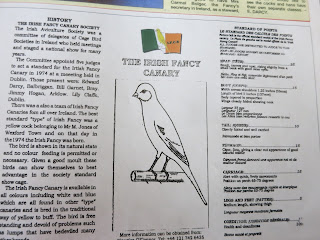 The Irish Fancy Canary originated in Ireland in 1974. The bird is shown in its natural state and no colour feeding is permitted or necessary. The Irish Fancy Canary is available in all colours including white and blue which are all found in other "type" canaries and is bred in the traditional way of yellow to buff feathering. The bird is free standing and devoid of problems such as lumps that have bedeviled many other breeds.

The Irish Fancy Canary Club of America was founded in 2009 by Brian Byrne and Paul Cruise. They imported 12 pairs of Irish Fancy from Maurice O'Conner of Birmingham, England. ( M. O'Conner won best champion adult, second best champion, second best adult, best champion adult.)  In the US, the impressive offspring from birds that Brian and Paul imported have been shown at several local shows usually placing in the type division winners and also placing well at the National Cage Bird Show the past two years. 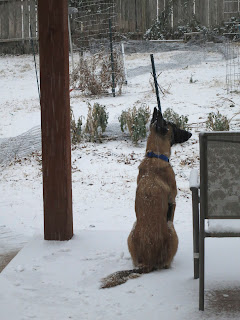 just saw your blog post on the German Irish Fancy articles, there is a big debate about a new standard for the Irish fancy in Europe right now.A lot of the English breeders want a better point system and new standard model. I tend to agree as the standard model today does not represent whats winning on the show bench here in the US and Europe. What say you Linda?

Brian would like to know more about what is winning on the show benches her and Europe. I was really happy to find this issue on the Irish Fancy.

I really want to get some Irish Fancy but alas another year has past...If not this year perhaps in Tulsa at the national cage bird show...oh well...

Sounds like you are having a good breeding season.