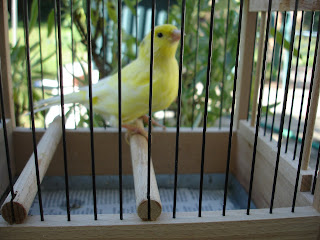 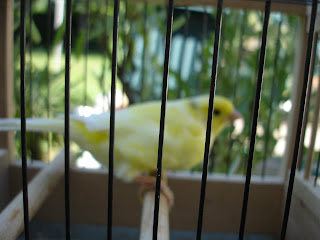 Good Singing Position - Right before he sings he will wipe his peak on the perch and then hold onto your hats!

Today as I was taking care of the birds, I heard a beautiful slow and falling delivery of Lu Lu Lu. So beautiful but alas I only heard it once and it was impossible to even guess where that beautiful hollow bell sound came from. It must be my older German Rollers but which one?

Even in a dim room, now that Fall cooler weather has arrived, the German rollers are singing almost continuously. Young birds are working their throats and singing a baby song, yet to learn fine tours. It reminds me of Mary, my ten year old granddaughter, learning to play the piano. At first, it was just hitting keys and going through the movement but this Fall she is playing beautiful music, even learning to play her first Beethoven this week! Birds, even though they must regrow singing ability brain neurons, progress much more rapidly than humans, they will go from twittering to fine tours in just a few short months. Dramatic growth takes place once they are in show cages! For many, once caged, they will improve and peak in only ten to fourteen days!

In preparation for the November song competition, cocks must be separated from hens. If you are unsure, separate the fatter ones from the thinner ones, as often the thinner ones are hens. Group the cocks is small groups of three or four brothers or half brothers. It is best to use cages with solid wood on three sides so the bird will deepen and refine their sound. Even when caged up, I like to use wooden cabinets and a small room with good acoustics for practice performances.

Show cages come in either an 8 or 10 inch size. At first, it might seem that it would be better to use the larger 10 inch cage but actually birds lose more weight more rapidly in the 10 inch cage so I always move my best teams to 8 inch cages. Just moving that extra 2 inches can be the difference in traditional build and ready rather than thin and quitting singing.

Older potential tutor birds should be caged up at least a couple of weeks before the young. The best tutors are faultless older cocks. I use several tutor if I can find good ones. The first tutor should excel in hollow roll and only sing four good basic tours. Do not introduce beating tours too early because they may like them so well that they will drop the beautiful hollow roll and just sing beats irritatingly over and over. If I tutor in a fifth tour for more points, it will only be done a couple of days before the show so that it can be scored for it but so that the fifth tour does not dominant and destroying other tours. After hearing that beautiful hollow bell, I think I am going to start caging up old cocks a few at a time and see if I can find him!

I was telling my audiologist about the fact that birds learn easily from a live tutor but not from hearing recordings. He was not at all surprised as he imagined they learn not only from hearing the sound but also by seeing the throat move just as we hear and also read lips. He sited experiments where they had a different word said than the lips mouthed and sure enough everyone thought they heard what the lips had mouthed instead of what was actually said.

On rare occasion, a team bird will move its throat and make no sound at all. Air sack mites have been known to cause silent singers in some cases. The judge must be careful not to give the silent singer scores earned by his team mates. It is hard to catch his karaoke performance till he is the only one "singing" and then the gig is up!

Critical Concept: As you listen to your birds, keep an eye on the throat. Does it beat or tightly roll, learn to associate the way the throat looks with the sound.
Posted by Linda Hogan at 7:42 AM

The best judge I ever stewarded for insisted on a white backdrop to the staging, "so he could better see the throat movements".
Yours in the hobby,
Richard

When I attended the German Roller Meisterschaft in Germany, they used a black wood screen which the teams set up against that also had black wood wings on two sides.

The judging room was small about like a closet with a small table with the described screen sitting on the table for the birds and a small table for the two judges. It was so small that only one person could move in it at a time. The stewart side stepped with the birds and handed to his assistant who was standing in the doorway. One of the judges had to move out of the doorway when they had a third chair between them for me to sit on. They had probably about six of these judging booths each with two judges. The two judges are selected to balance each other and only certain complimentary judges combinations are allowed as they want the two to discuss the birds and be neither too hard or too lenient on their scores.

I had a great time speaking my opinions and trying to learn from them. Usually one would call out a tour and the third position and say for example 8 and the other might say 8 or sometimes 9 and then if their opinion differed they kept listening till they agreed. At one point, my first thought on one bird was a 9 when they both said 8 so I chirped out 9 as I was not quite sure why it was an 8 well we discussed but not speaking the language and just understanding a bit I finally shook my head OK 8, I would agree. This was not a strong team and certainly not in the cards to win anything so when the final score was turned in they both agreed in unison 9 and gave the one bird a 9 as I had first suggested and with that they said "For the American"! Of course, I was all smiles from ear to ear. I can not express in words how I felt because of their warm hospitality and the sharing on knowledge and love for the birds! I will always count that moment as one of my peak life experiences!

Back to the screen, it improved the sound projection and they thought the black background with the bright lighting allowed them to see the throat better.

Oops Third paragraph, second sentence, should read "Usually one would call out a tour and the BIRDS position....

Linda, the Western Waterslager Club use a similar three sided backdrop. It does seem to "focus" the sound toward the judges/audience. I suggested the backdrop and standardized lights because our rooms are big open spaces designed for sound deadening, and having varying lighting conditions. Right or wrong every exhibitor now knows what to prepare their birds for.