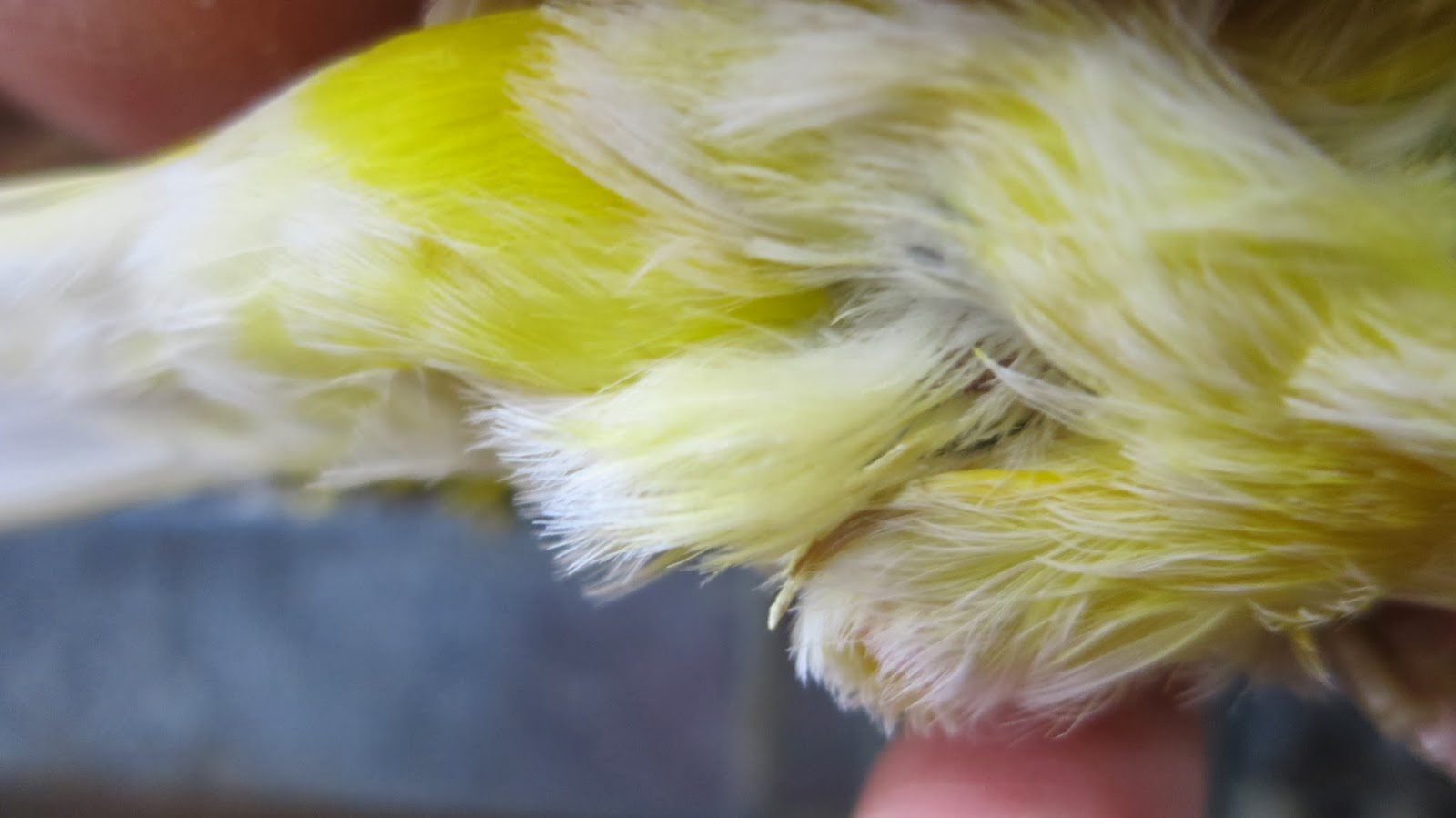 When I want to make a quick assessment of how the cocks are coming along, I observe the perched cock to see if I can see cock feathers hanging down. 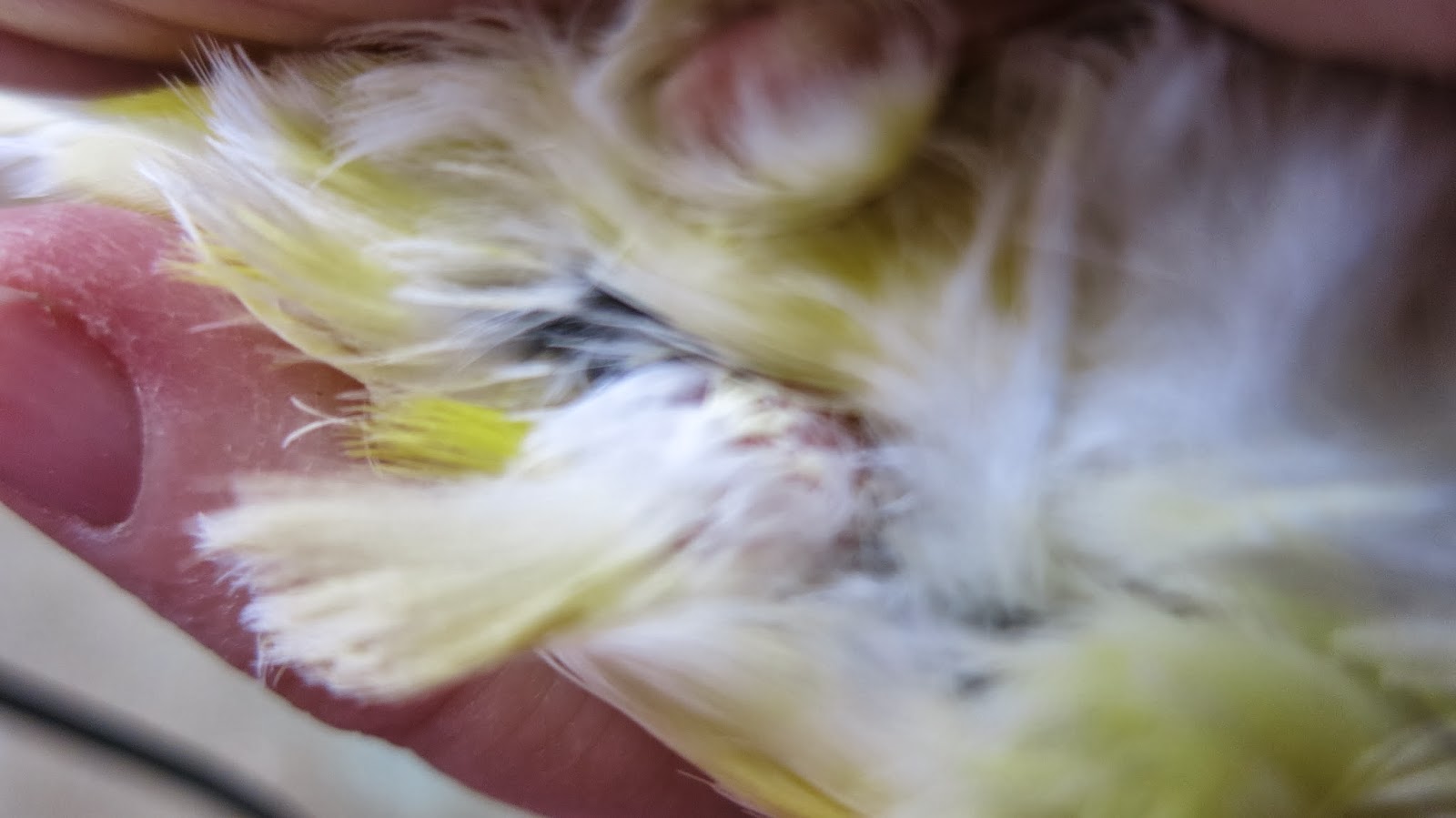 A closer look at the same border males looks pretty good. He is ahead of his peers! 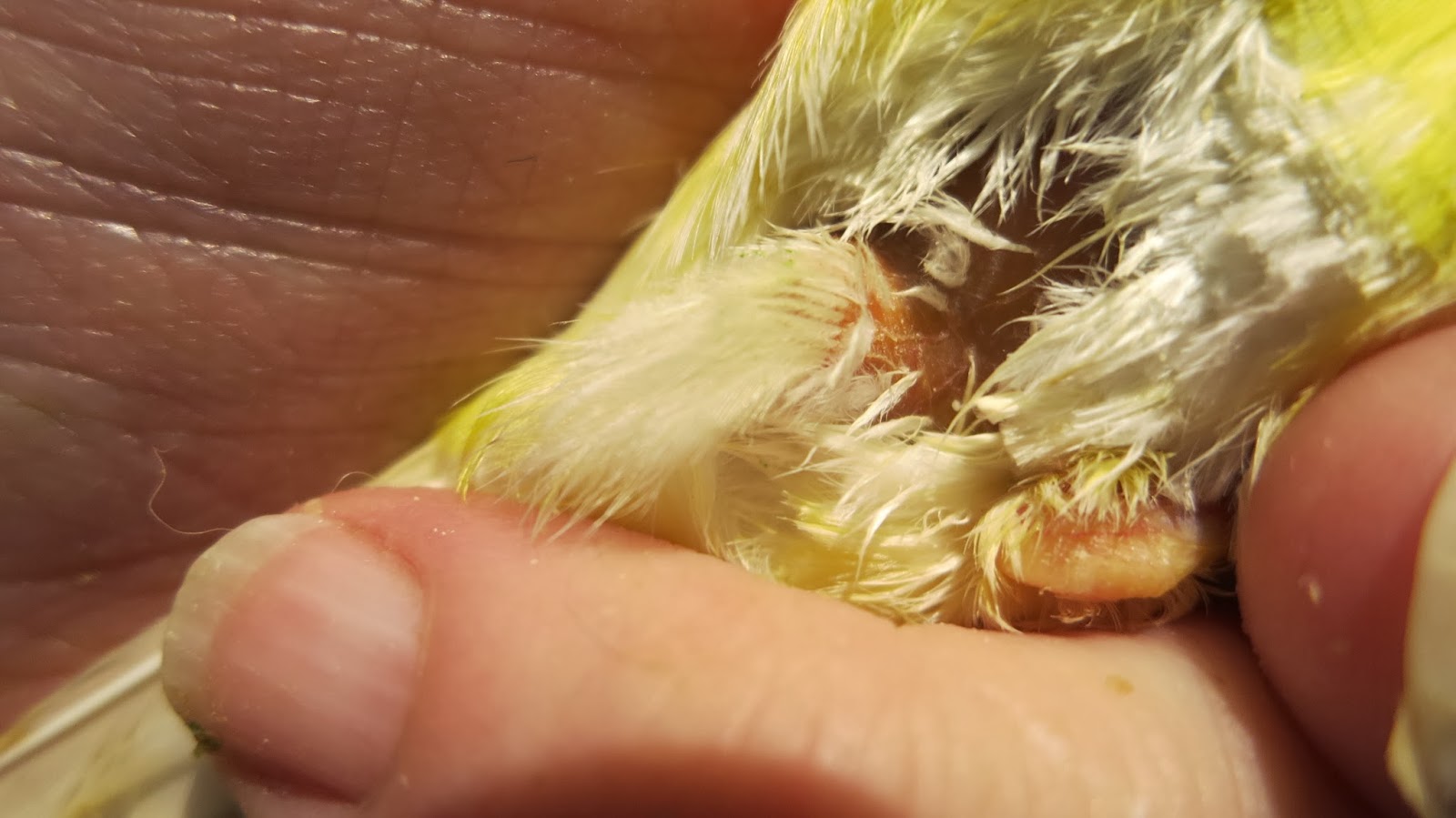 So what about lagging Richey, he is really catching on and developing since a few days ago when I made those light and dietary changes. Today, I could see a hint of cock feathers hanging down on Richey! His vent is also starting to point forward toward his head and starting to get a red color. It is still too yellow in color and need the sides to engorge rather than be parallel. He is very active now and does have a hint of fat layer on his lower abdomen.

Yesterday, I decided to add the new Biodecken product Novafood breeding on the Border cock above and Richey. Even in 24 hours the vent is development is dramatic. They are both individually caged so can't tell about aggressive tendency but I will be evaluating that too. When I scan, the cocks getting all the other changes except Biodecken novafood breeding, I do not see any cock feathers hanging down. Now I will try it on a flight of two and see if they start being too aggressive with each other. Report: cocks are much more active and doing some chasing but nothing serious. A couple of border were very lazy and like to lay down on the perch. They are up and moving! 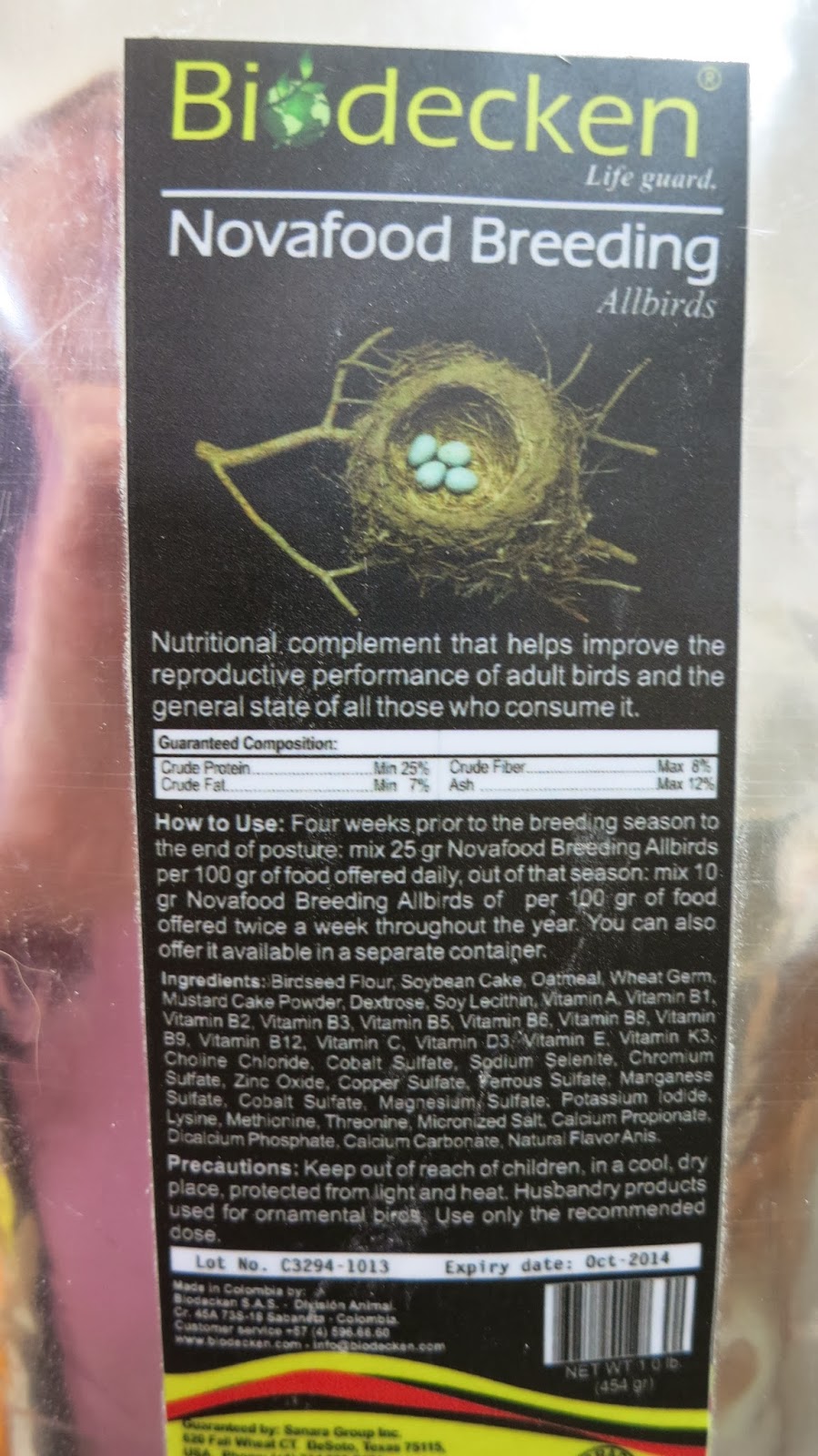 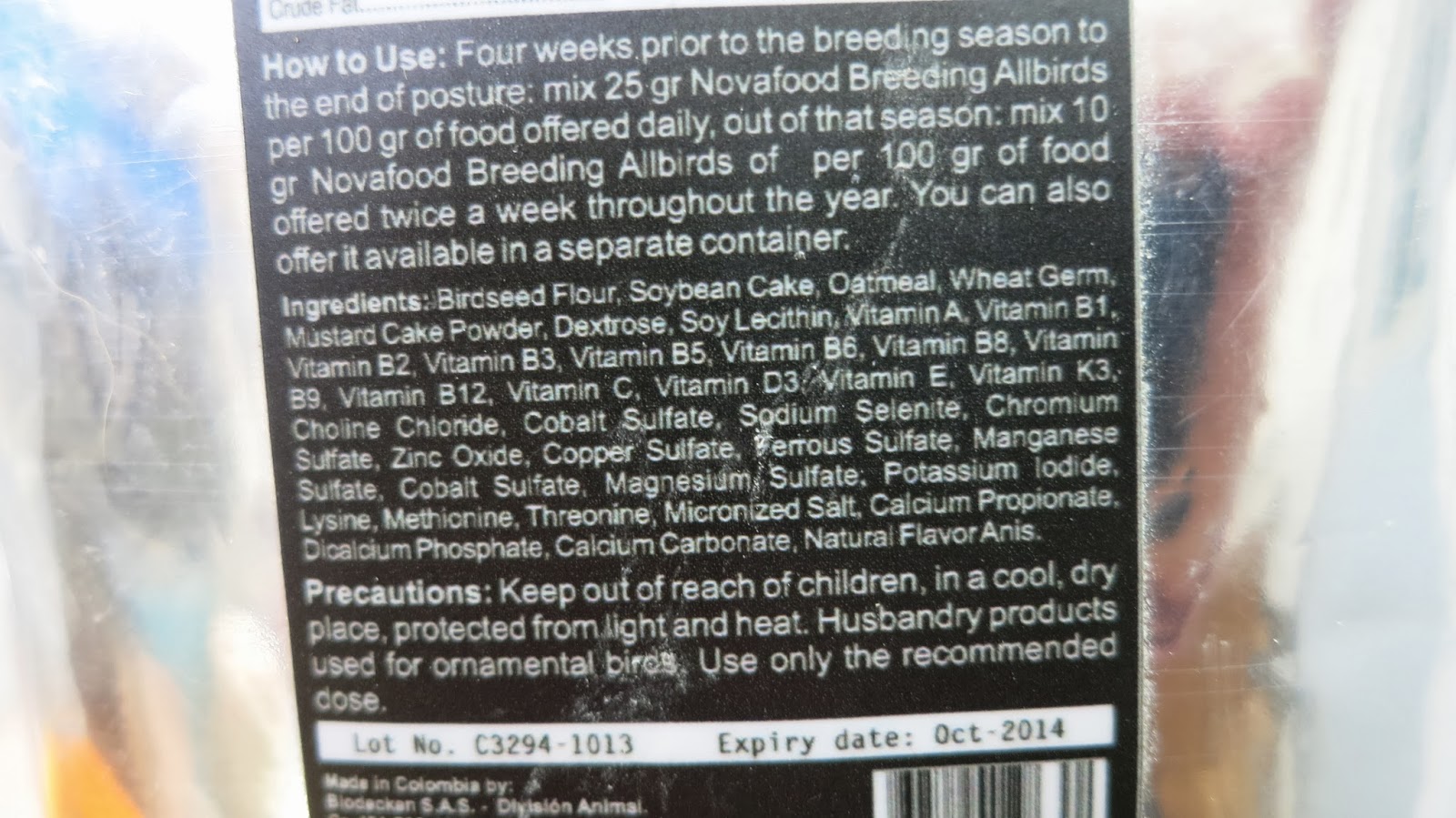 When cocks are ready, I will try it on some hens.

Later in the day, I observed a slight reddening of the Border cocks legs and feet. Borders are sensitive to protein, ideally it is probably 16 to 18%, and when they get too much you see reddening of the legs and feet. Immediately, I removed the Novafood Breeding diluted mix and feed unlimited greens, oats, and bread and today I also gave each experimental cage some of the Avi-Gain which is high carb and fat. The color has now dissipated. I will have to be a lot more careful with the amount. I did mix Novafood breeding (25%) with food at the ratio listed but the food I use was regular Novafood (14% protein) which not knowing the amount to feed, pushed the protein way over. Oops. I need to mix with something with very low protein content and feed very little. For right now, I have stopped this experiment taking the advise "If it isn't broke, don't fix it"!

Update: Well the lazy Borders are still moving and one started singing a breeding song. So am I going to keep trying this product. Yes, it has quite an effect but what I need to figure out is how much to use and how often. Have contacted Ricardo Sanchez, Biodecken distributor is the US, and he will be getting with the company nutritionists for advise.
Posted by Linda Hogan at 12:00 AM

Hi, I like the way you discuss a topic and go about it in a scientific manner. Not all changes are good. I find that most of the older members in our club are always giving me advise. I appreciate it but when I am not having problems I am not eager to make radical changes.

When I joined the club and the members were trying to be helpful but telling me how to give the egg food etc I finely told them that all but two of the eggs laid last season hatched and I didn't loose one chick. The two eggs that didn't hatch my daughter broke them taking them out of the nest. I only had a few hens but I must have been lucky.
This year I have a new problem. In the past all of my cages had solid bottoms so I used newspapers to line the cages. Then hens would start tearing the newspapers as they started coming into breeding condition.
Now all of my cages have wire bottoms. Nice for cleaning but as then hens are starting to come into breeding condition they are pulling out their tails, even those I have caged by themselves. I am not ready to put in a nest box or to start giving them nesting material but I did put newspaper over the wire bottom and I noticed they all have been much happier.
Dr. Jim

Some of my hens have only corn cob bedding on the floor and others have wire cage bottoms with newspaper under the wire. Those hens do pull paper from under the wire too! Yesterday, I found a hen with her tail pulled out and sure enough as you predicted it is in a cage with no newspaper on the bottom. Even a few small pieces might please those hens.