Hitchcock The Birds: What Done It Mystery Contest

OH NO! What is wrong with Mario?? 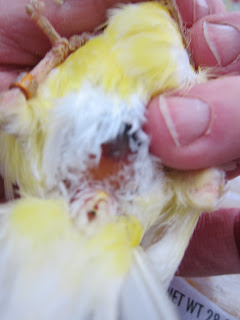 Mario is so special after all I went through last Spring with him and I so want to share him with lots of girls this year, this is terrible!! 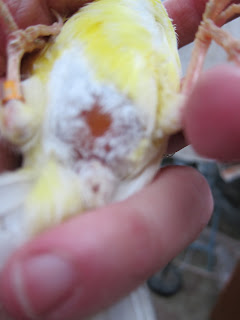 Mario Photo about five days ago. 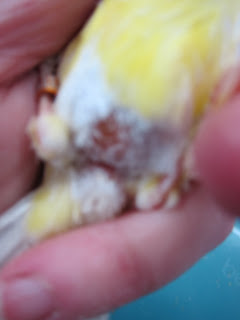 Mario Photo just two days before developing the dark abdomen. He has some improvement in vent development (more red) and appeared to be coming along nicely but not ready for breeding yet. He was singing and to encourage him to get with the program, I put another male of equal development in his large open cage. The second male also came down with the same dark abdomen at the same time, a little less dramatic than Mario. No other birds in the aviary came down with it.

Act fast to save Mario. Send in your analyses and treatment recommendations within the next 24 hours. Results will be posted tomorrow to this post.

1. Both Birds developed dark abdomens at the same time.

2. Neither bird looked sick other than the discolored abdomen. Although Mario acted less active and lost interest in singing to other cages. 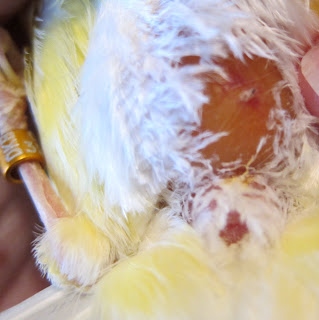 When I saw Mario's black abdomen, I thought of liver disease. But what can cause it. First infectious diseases including bacteria (many different ones, even Mycoplasma tuberculosis), chlamydia, viruses, parasitic infections such as trematodes and protozoa. Also noninfectious disease like metabolic disorders fatty liver, iron storage hemosiderosis, circulatory disorders and hemorrhage, and hepatotoxins often from plants or mycotoxins from molded seed and even traumatic rupture.

The suddenness of black abdomen which literally happened overnight, the lack of typical illness symptoms such as fluffing the feathers due to chilling, normal droppings and overall appearance of good health (had I not been catching Mario daily to check his vent development, it would have been advanced when I discovered it as there was not a hint that he was in trouble till I saw the abdomen). I immediately started eliminating the infectious possible causes and focused on noninfectious causes.

Mycotoxins was a possibility as he had a plain dish of chia seeds. These were nicely packaged in foil package, purchased at the health food store but only when I got to the bottom did I find a big clump which was obviously a clump on moldy chia seeds. No wonder they were marked down... Other birds also ate these same seeds so I was not convinced that was it although it could have been. But other birds ate the same stuff before I discovered the problem...

Next I thought about the herbs in my new Egg - N- Herb. Toxicity can vary by species, rapeseed is can be poisonous but canaries are not effected or Johnson Grass which does not effect canaries but can effect large animals. And again all the birds ate it and maybe it was just a consequence that I had just started it equal parts with cooked quinoa about three days before this started. Again all the birds were fed it so why Mario?

Was it fatty liver? The other bird was not overweight and he had the same black abdomen.

I have been waiting for the orlux vitamins to come in from England and rapidly my supply of both orlux Ferti-vit and omi-vit were running low. I wanted to give all the birds Ferti-vit daily but supply was such that I need to give some omi-vit which is twice a week. So cocks got ferti-vit and hens got omi-vit. The day before this happened, I was first going to give some hens the iodine treatment with vitamins but then changed my mind and went ahead with the omni-vit. I remember thinking how foolish of me to make that up and now it would be wasted. So I instead of wasting it I filled Mario's cage water with the mixture. They were the only birds who got it. This iodine also contains iron and I think that was the problem. Which also explains why they recovered so quickly.

Treatment was KD powder in the water for about a week and then it is back to ferti-vit. I am so glad I did not start them on antibiotics or heavy arsenals as they too could be toxic to an already sensitive liver. The liver has great powder to regenerate and I expect no long term effect. 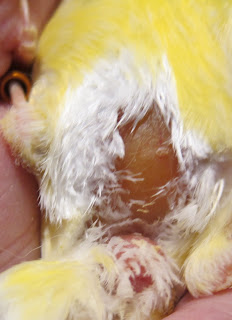 Mario after a week on KD. He will be ready for breeding soon!
Posted by Linda Hogan at 9:39 AM

Hi Linda
Please use any good liver medication(even human medication) for the black spot .In SA I would use a BEDSON product that treats the liver,or give the birds the whole dandilion roots and all.Bruise the root so that the birds can eat it.
Best Of Luck.
Donald

Looks like it might be atoxoplasmosis. It causes the liver, spleen and pancreas to enlarge. Its very hard to treat. I would try Baycox. A sulphonomid wont work because its passed through the gut wall. They will also need extra Vit. B and K.

I will keep my fingers crossed.

You will need to treat with Baycox 2.5%

Do you routinely treat your birds for Cocci?

Me again, I still think that the two birds have Coccidiosis. Very unfortunate at any time but even more so in the run up to breeding.

Coccidiosis is contagious, in that birds will become infected through eating the oosyts (eggs) which are passed through the droppings.

The whole shed will need to be cleaned with OXINE, which should be readily available in the USA.

Hope I'm wrong and it's something less serious.

After reading this string of comments, I am glad that I gave up raising canaries this year. This was my 48th year as a small breeder. You seem to need to almost be a veterinarian and have a whole lot of meds on hand - where does this leave the small breeder just starting out? I have never raised more than two nests a year, so having all these the meds and vitamins would no doubt expire before I used even a small amount of them!