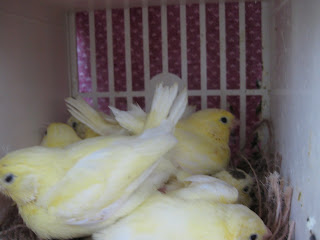 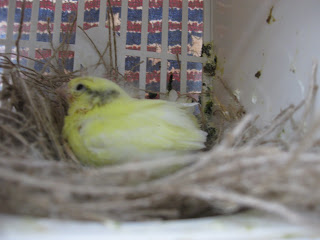 How Many Chicks Should A Hen Raise Each Year?

What was two outside nests with four chicks each in a colony flight of two hens and one cock, has had some nest switching and only one lone chick is in one end and the other seven are snuggled in tight in the other end! It is so amazing to me that the chicks do the nest switching even before they are seen leaving the nest! The larger bird seen in the upper right hand corner is the hen and she really is trying to sit on seven chicks!

If that isn't enough activity the hen with the busy nest had laid two eggs in that same nest!! Naturally those eggs are slightly soiled since seven chicks and the hen were sitting on them but I collected them and we will see if they hatch!

Actually, I think it is enough if a hen does one round if she feeds four or five chicks. Hens that only feed two chicks can easily go more rounds. And if they have infertile eggs, they can keep clutching till they get the minimum or four chicks. Just be sure you have them on D3 and liquid calcium.

Last year I had some really prolific roller hens that just kept producing till they went three rounds and had produced a dozen or more chicks each. After producing so many chicks last year, none of these hens hatched or raised a single baby this year!
Posted by Linda Hogan at 5:23 PM