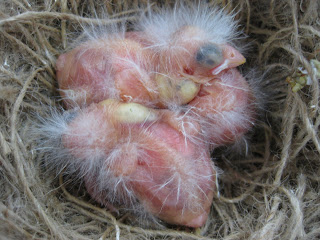 Another photo of above chicks, note the highly visible yellow fat layer under the skin on the chick's rump! 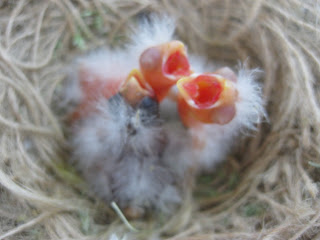 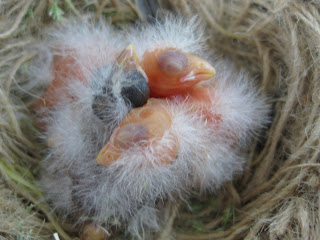 Another photo of above border chicks, note how fluffy they are so even though they are not stuffed, they are doing well!

Chicks Still Hatching In My Aviary

Although the breeding season is coming to a close, chicks are still hatching in my aviary. I know that the season is coming to a close because not only do I see increasing numbers of long flight feathers but also the percentage of eggs hatching on the 13th day have decreased from 90% to 30% and falling. When your chicks hatch on the 13th day it is a sign that things are working extremely well, that is your A game but when they hatch on the 14th day, your are down to your B game!

Recently, I had a hen with five eggs who was nesting in the outside cage style nest. After 14 days, no chicks had hatched. My normal pattern is to check fertile eggs that failed to hatch by noon of the 14th day for live chicks by floating the fertile eggs in warm water and any that move I transfer to another hen for hatching.

On this hens, 14th day, I worked a day shift rather than my normal 2nd shift so I just let her be. In fact, I forgot all about her and focused my attention on the other hen in an outside nest in the cage who was also sitting on fertile eggs but due a week later. To my surprise, on the 21st day the first hen hatched four chicks which was the same day that the other hen hatched four chicks on her 14th day.

I kept looking at the calendar and sure enough this hen hatched a week late! I had noted at the time how poorly this hen was sitting on her replaced eggs in spite of my giving her unlimited hemp seed. So I thought, that is reasonable, she just waited a week to get her incubation temperature and this is my first time for 21 day hatching! Luckily, I only told Leng in an e-mail about this unusual 21st day hatch instead of blowing breaking news all over the Internet!

After about a week when the nest was soiled by the four new chicks, I cleaned it out and to my surprise, there was a layer of five eggs covered in nesting material below the level of hatched chicks! The hen had a good laugh on me as she had built over the five eggs I had put back in nest and laid a second clutch with the other hen. So it was really another 14 day hatch like usual! Man am I glad I never mentioned this 21 day hatch in this blog!

The hen has now set her second round and sure enough she repeated the same pattern, building over the replaced eggs and laying an immediate second clutch! I hope all her chicks are cocks as I do not want an aviary of hens doing double clutches. I have had a few cases of border hens who would lay double clutches of nine eggs but six eggs is about all a hen can cover. I had a high number of seven egg clutches. High methionine and other amino acids encourage hens to lay more eggs, in my aviary this is from the ABBA Miracle vitamin product that I add to my egg food.

Question: Have you ever had 10 or 12 eggs laid in one nest with only two birds in the cage?
Posted by Linda Hogan at 6:56 AM

Weird things could happen and I believe it if you say so :)

It's nice to see pictures of more border chicks. I finally got a few myself. The challenge now is to keep them alive!

As I read, I thought I am sure the hen laid a new clutch, and just then you confirmed it. What is interesting is whether or not the cock was with the hen all the time? Could she have been fertilised from the first pairings and "carry" these until the second clutch was laid?

As for the question, in SA you're doing well when the hens lay 5 eggs, most times it is only 4, but the highest number I have had on two occasions, was Border hens who laid 6 eggs in two separate clutches. Almost no one would believe me!

Yes, I have had 10 or 12 eggs laid in the same nest in a five or six day period but instead of having one cock and one hen it was two hens paired!! LOL