Terror in the Aviary 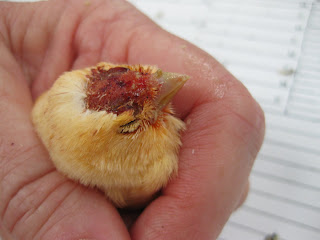 Yesterday, I discovered one of three two week old chicks in a breeder cage had been attacked. The other two chicks were totally unharmed. I quickly checked the underside of the hen and cock beaks for signs of blood.

As I suspected would be the case, the cock was the culprit with tell tale chick blood under his beak. Even though he had been single paired with the hen and he had helped feed chicks, now that the hen is ready to mate and lay their next clutch, he turned on the chick! Had I not discovered the chick, it would most likely have been killed!

This cock was removed from the breeding cage and is retired from breeding this season. I suspect he consumed too much egg food for himself instead of passing it on to his chicks!

Till they are weaned, the three chicks will remain with the hen. Today, the hen laid her first egg. Since the cock was in with her for several weeks, the hen does not need the cock to fertilize her clutch of eggs.

Once weaned, I will keep the wounded chick in a separate cage to prevent other birds from picking on its head. Housing in a separate cage is necessary whenever feathers have been picked down to bare skin on highly visible parts of the body. You can get by with feathers being plucked in the lower abdomen as it is not so visible.

Feathers will grow back in time and eventually you will not be able to identify which chick was damaged. The chick is even looking better today!
Posted by Linda Hogan at 6:59 AM

I have also experienced this before with a Green Border cock. He was a perfect father before the attack and it also happened very unexpectantly when the hen was just about to go to nest again. My theory is that he saw the cock chicks as being a threat to his breeding hen! There were three chicks and the one that was killed was the deepest colour and the biggest of the three affirming my suspicion that he was a cock! The two birds that survived, ended up both being hens, as I had suspected that they would be. I think that some cock birds are very territorial and will kill any cock bird that they see as a rival for the breeding ready hen! I have even seen a cock bird break eggs, so that he could get the hen to go back into mating mode, but I think he was just.....