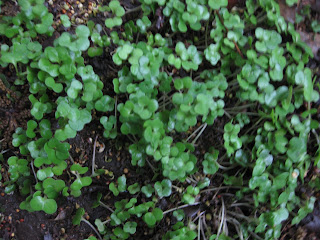 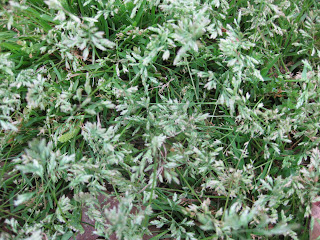 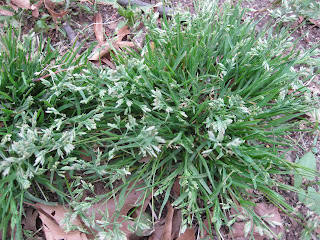 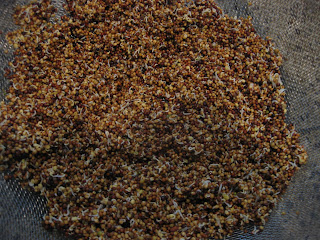 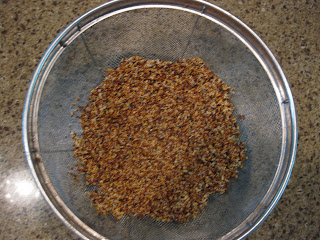 As hot weather approaches, chickweed turns yellow and no longer produces those beautiful dark green seeding heads. I try to keep it going as long as possible by keeping it picked and mowed but alas warm weather always eventually destroys my chickweed till next year.

At this point I have so many chicks it is hard to keep up with sprouted seed for them. To expand my sprouting operation, in addition the the three tier sprouted pictures earlier, I sprout in an open wire colander. I soak seed in tap water about four hours and then put them in the colander and rinse with tap water once a day.

Any extra waste seeds can be thrown out on the ground and will readily produce more greens for the birds. They especially like canola rape leaves. One of the reasons, is that in a good wet year, the underside of the rape leaf will have small green aphid eggs and they must be very tasty! I recently had some sour smelling sprouted canola rape so I threw it out on the ground as I did not want to feed it to the birds and it has produced a fine crop growing in a hard bare path (top photo).

In addition, I am now seen out in my back yard with scissors picking seeding yard grass. The birds really like it but be sure that the yard you pick from has not been chemically treated in any way. Even the narrow leafed dandelion is another favorite. My birds are a little reluctant to eat the wider leafed dandelion as the must not be as tasty.

Years ago, I had access to unsprayed Johnson grass. The canaries loved it and unlike other animals it agreed with them just fine. Now Johnson grass, declared a noxious weed, is routinely sprayed in ditches and it is too risky to take a chance on picking it and killing your birds. It is best to pick only from known pure sources!
Posted by Linda Hogan at 8:09 AM

IS THAT ANNAUL RYE IN THE FIRST TWO PICTURES?

A few years ago, my Belgian malinois dogs were destroying my yard so I bought several lbs of shade blend mixed grass seed hoping something would grow in spite of all the dog traffic. Two different kinds did grow but the one pictured is the only one that has those lovely seeds! As a result this one is spreading nicely and over time it covered the ground very well even though I continue to have two active malinois. I will show some to some master gardners and see if I can get a definite answer for you. In the dough stage, canaries really like it, especially the borders!

Brian from Savannah here, it looks alot like annual/perennial rye whitch is a good grass for zone 7 and up, here in Savannah we sow it in the winter for a nice green lawn in the cool months. Its also what we had in are gardens in Ireland. I notice house finches and sparrows feeding on the seed in spring.

Thanks for all you do "mo chara"

Thanks Brian for the grass identification!