Two or More Hens Are Better Than One 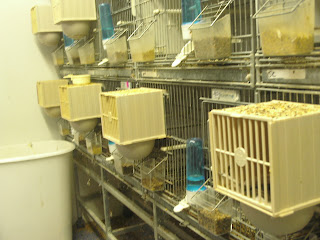 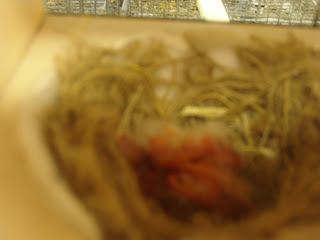 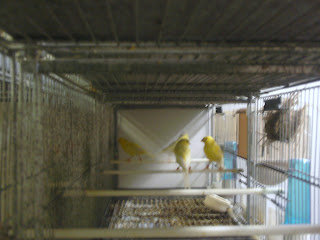 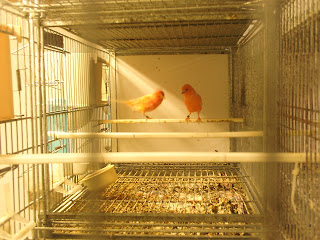 Several years ago, I visited Doyle and Cheryl Johnson's aviary while they were still living in Texas. Doyle enthusiastically said "you just got to see this". To my surprise, they were practicing colony breeding! Each breeding cage had two or more hens with one cock and lots of babies in every cage! They assured me that it was easier then rotating the cock and produced more chicks per cock and per cage. Ever since I saw their operation, I have been experimenting with colony breeding. Based on my success over many years, I have increased the percentage of cages dedicated to colony breeding every single year! This season, I will use colony breeding with all my Colorbred, Staffords, and German Rollers. And for the first time, I will try colony breeding with my borders!

The only exception to colony breeding that I have planned is a five year old German roller hen. She was out of my stuff and raised by Doyle. She is the sister of his best cock he has raised to date! Last year, I single paired her with a young cock and she produced six chicks. I shared half of those chick with Doyle. (Note: Two aviaries or more aviaries is also better than one!) Again this year, she will be single paired with a German young cock for the season. The old gal, at her old age, has earned the undivided attention and help of a new young cock!
Since Doyle and Cheryl already have chicks this year using the colony breeding method, I have ask them to take the pictures for this blog and to co-author this blog with me. Doyle has a colony of five green roller hens and one cock which has three hens with a total of ten chicks and another hen sitting on 5 fertile eggs! One hen, however, just does not seem interested in nesting at this time. His cage size is 18" by 13" and 15" high for each hen in the colony. Doyle removes dividers between the cages, to give each hen in the colony the same nesting area including an outside nest just like she would have had in single pairing. The difference is that the birds can move freely in what is now a long flight.

Just had a call from Doyle finalizing this blog, He was updating me on three most precious German imported hens from one of the top DKB German breeders. The three hens are colony breeding. He reports so far all fertile eggs and one hen has hatched four chicks, one has hatched three chicks, and the final hen is sitting on five fertile eggs!!! What fantastic news!! With all those chicks he already has, now this report on the precious hens, I feel an attack of Aviary Envy coming on real strong again!!! I really am tempted to get my birds going. Instead, I quickly congratulated him and immediately spoke for some of the chicks!! Maybe I should have split this blog and made a second one called "Two Aviaries are Better Than One'!!!

My cages measure 30 inches in length and 16 inches in height and depth. In my individual cages, I have tried up to four hens with one cock, but I have had the best result when I use just two hens in this size cage. The hens are selected, not only must compliment the cock, but in addition it works easier in this size cage when both hens are at about the same developmental stage. In some cases, the hens selected have been housed together for quite some time, but usually they are selected when they are ready to pair.
For two hens, I place two nests at opposite ends of the cage but then add one extra nest in the middle of the cage until the hens have selected their nest. Once each hen has chosen her nest, I remove the extra nest. Neither Doyle or myself have had any trouble with the hens wanting the same nest, except when I tried four hens in the same individual size cage that I normally used for just two hens, or when I offered one outside and one inside nest. In that case, both hens wanted the only outside nest!

Doyle has had consistent success with up to four hens to one cock by removing cage dividers between what would have been four single breeding spaces. I really like Doyle's idea to remove dividers and expand the cage into a flight when you want to pair more hens to a cock! I think I will again try a few four hens to one cock this year, but this time I use cages where I can pull the divider as Doyle does. With the dividers option, he can easily manage hens at different developmental stages, should trouble with weaning chicks occur.

After the hens have their own nest, I place labels on the outside of each cage with the cocks number and also label each nest with the hens band number. The hen label is placed on the outside of the cage directly in front of her nest. Doyle puts colored bands on the hens to tell them apart. He then labels the nest with the numbers he has recorded so he does not have to catch the hen to verify the band number. Keeping the hens straight has not been a problem as neither of us has ever had more than one hen lay in the same nest, although if they were overcrowded it might happen.

Usually, I takes the cock out after both hens are sitting as I like to move him around and I want him to receive his weekly treatment for 24 hours with vitamin E in the water till he molts. I have found that the hens sit contently and take care of their own chicks normally with or without him in the cage. Another advantage Doyle pointed out is the cock is less likely to bother the hens when their are several hens in the cage.

Last year, I had an unusual experience with one nest of Staffords. Each hen had three chicks but one hen would help feed her "sister's" chicks and then she would return to her nest to feed her own chicks! As the chicks matured, one by one they tried to get in the same nests with the hen who did the extra feeding! Eventually, I added another nest touching the super hen's original nest to accommodate the extra chicks! That is the only time I ever saw this as usually each hen feeds their own chicks as expected. But we both have seen chicks change nests and be fed by either hen whether they have changed nests or have left the nest.

Sometimes, for various reasons, the hens are not cycling together. Last year, I had a situation where one hen was sitting and another hen with chicks. At first, I thought this would be trouble as I was offering egg food and later greens and didn't want the sitting hen to eat it. The sitting hen just ignored the forbidden food while the other hen feed her chicks normally.

Once chicks have left the nest they can be a problem, if the other hen is still incubating. Invariably the chicks will try to sit on her nest with her and disturb her sitting resulting in fertile eggs not hatching. If they interrupt the sitting hens incubation, the fertile eggs will not hatch. That is where putting in a divider to forbid the chicks to get to the incubating hen's nest would save a nest of fertile eggs!

Colony breeding is not a cure all. Duds are still duds but at least you have not tied up a cock or a cage for a dud! Once you have identified a hen as a dud, remove her from the colony as she can create havoc especially when the young birds leave their nest.

But colony breeding does have real advantages when you are trying to breed one cock to several hens at the same time! With our busy work schedules, it is not always possible to move the cock when we need to. Doyle reflected that with his schedule, when moved the cock from cage to cage, he typically got one to three fertile eggs in each cage. With colony breeding, he only see an occasional infertile egg in the whole colony! Instead of worrying about how and when to move the cock, the birds simply take care of it for us. And we definitely agree that they are better at getting job done then we are! And besides, it even helps you schedule his time off ( at least a couple of days) to build his sperm count between encounters.

Sounds like colony breeding is the best thing since sliced bread!! You Betcha!
Posted by Linda Hogan at 7:00 AM

Linda,
What type of cages does Doyle use?I have done this also it really does work.I sure would have like to have gotten my hands on a couple of those imported roller hens.

Wonderful article! I too have used colony breeding with success my avairy.

What an amazing article! Please you must try it with your borders and let me know how it goes. I would love to breed my best yellow and best buff cocks to about 4 hens, and this would be ideal, cause I dont have to worry about moving the cock birds around all day. When I think of the possibilities..... mmmmm

I have a spare corona consort hen and a corona crested hen would putting a consort cock in with these two hens be ok??

That would be fine.