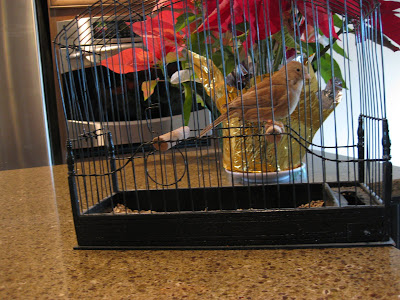 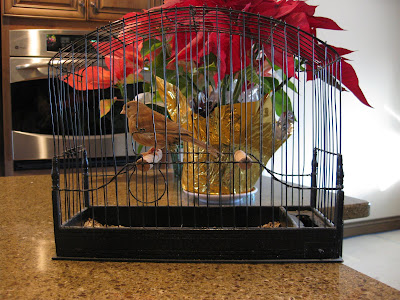 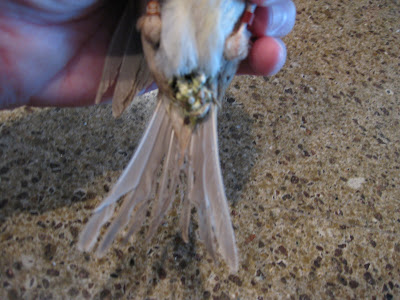 Today, as I fed my birds, I noticed this particular hen in a flight of a dozen hens, feather's were not as tight as usual, her eyes didn't look wide open and happy but rather somewhat squinted and distressed, and she was occasionally dropping her wings like she was straining. At first I was shocked, what has happened to this hen? (Click on picture 1 to enlarge it to see how subtle the first view was.)

She turned again, and it was obvious, a large dropping was hanging to her! (Click on picture 2.) I immediately caught her and turned her bottoms up, only to be totally grossed by the huge dried excrement!! (Click on picture 3 for the full effect!) After a very brief photo session, I washed the area, removed the excrement and pulled a few feathers around the vent area to make this less likely.

The cause of this could be an infection but before I jump to that, I remembered that a couple of days ago, I had generously increased the percentage of sunflower chips in my seed mix to about 25%. Whenever you increase the richness in the diet, some birds will pass loose droppings and if the feathering is intense around the vent, the dropping can stick to the feathers and if not noticed it will seal off the vent and the bird may die. Birds that are too thin and heavily feathered are at particular risk as the flatten lower abdomen brings the feathers closer to the vent.

After seeing one hen, it is wise to carefully look at your birds from several angles and bottoms up any that need it. This I did and found several borders with one or two droppings sticking to feathers and an occasional colorbred with the same. No German rollers had this problem just as I expected. Rollers feathering is short and narrow and not as dense as most other kinds of canaries (except those bred for sparsely feathered such as gibbers). In fact, feather pairing is not even considered when pairing rollers.

So I am backing up the percentage of sunflower a bit, and keeping a watchful eye on my birds!
Posted by Linda Hogan at 6:48 AM

I have a consort hen with a similar problem. Switched her diet back to plain canary seed after have been giving her the canary seed mix. Have to catch her up daily (and it stresses her out, i guess) and clean the feathers under her vent. Have been in the same condition for two weeks now .. any tips on how to make her feeling better? Thanks