The job of picking a suitor for the bachelorette would have been simpler if I had the extended pedigrees on each of the birds. This and breeding records are very important in setting up breeding pairs!

The grizzle crest, light frost hen carries good color. It's hard to tell from a picture but she appears to be very good body type.

First I will eliminate Gator Heat: It may be that the photographer roughed up the feathers on the back of the head, but this has spoiled the general appearance of roundness over the top of his head. I would like to have seen him carry more roundness over the back and top of the head. It may be that the picture of him was taken at a bad angle, but it does not appear that he has a very good rise above his beak (forehead area). He shows good depth of body in the chest area but does not carry that through the remainder of his body. He may be a little too fat giving him a chesty appearance. In my opinion, he is not buff enough for this pairing.

The Sooner bird is an important bird to keep in my aviary but I would want to use him for breeding to bronze frost or bronze mosaic hens. He is important to use on hens that might be considered over frosted (too buff) and might be a likely candidate for feather cysts. Being a hard feather bird, I would be afraid that if I paired him with this hen, I would have less of a chance of getting a nice full crest.

Although Shocker did not get an equal shake from the photographer, he appears to be a more buff bird, carrying rich enough color so that the babies should be a pretty good variegated color. Shocker has a nice rise in the forehead area. Nice width in the front of the head, with a roundness that carries through over the top of the head down through the shoulder area. The body appears to carry a fullness that should compliment the hen. I don't think that the other cocks stand a chance in competing with Shocker! Shocker is my choice for the bachelorette!! 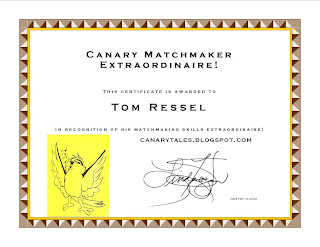 Congratulations to Tom.
I tried but its hard to match wits against such a PRO. Do we get a second chance?

Winning batchelor a very handsome fellow. With Staffords I understand you select for type characteristics first and then color. For the post I am understanding that it is OK to breed soft feather to soft feather?

Ninez: Many canary breeders have learned to breed opposite feather types and this works well in many kinds,but if you are trying to improve the crest in this frost hen in this contest, you will have to increase the buff just like you would if you were trying for a round crest in glosters. Pairing #2, the Handsome Sooner would definitely not improve the crest as he has very short and narrow feathers (note the porportion of his body to his tail) and the offspring crest would be a repeat of the hen. Likewise #3, Gator Heat would not improve the offspring as although he has longer feathering but it is still narrow so at best the crest would get more oval. Again this would not meet the goal. All three of these birds are part of my breeding program. They each have good qualities and less desirable qualities. The trick is to pair them so they compliment each other and not to double up on their deficiencies. This exercise is meant to encourage the breeder to think outside the box, identify breeding goals and make breeding choices that will take a step toward that goal. Thank you so much for entering the contest and also a great big Thank You to Tom for his informative explanation!!