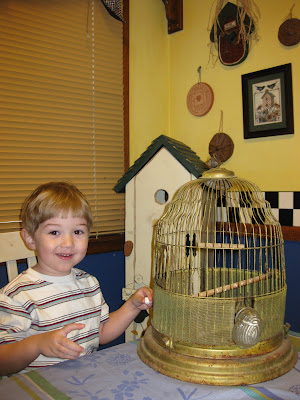 Who will continue and advance canary culture?

This week has been emotional with the recent news that my grand nephew, age 28, has melanoma. And will have surgery tomorrow around noon to remove the tumor, skin graft over the incision, and possible removal of any "hot" lymph nodes. My thoughts and prayers are with Brett but when they turn to my canaries, I am plagued with the nagging question, "who will carry on the fancy?"

My mother had five children. Although she was close to each of us, she passed the canary baton to me and did I ever get the fever!! Now I have three children but no one has caught the fever from me. My youngest daughter and son seem to have acquired natural immunity, perhaps from their father, so my hopes for them becoming bird lovers is nil.

When my oldest daughter got married, I gave her a pair of canaries and I was hoping that theirs would be a loving relationship just like the breeding pair modeled for them. She successful raised six chicks from the pair that breeding season. Although she did not catch canary fever, she did produce six children, five sons and one daughter!

The oldest three sons, Joe then Kevin then Jeff, during adolescence, each in turn went with me to bird shows ,working as show stewards. Joe and Kevin became so competent that by late adolescence, they were show managers for some of the Milo Wells German Roller Shows. They handled the entries, money, carrying in each team, and finally generated the show report. They were so good at it that Granny got to sit in and listen to every team! They all also helped me from time to time clean the aviary, trim beaks and nails, and on occasion take care of the birds when I was gone. Although none of the boys caught canary fever, Jeff does have bird fever as for several years he has kept his own small backyard flock of pigeons and chickens and occasionally ducks. When I was Jeff's age and went away to college, my parents caught my pigeons one night and to their surprise it was over 100 birds! I also kept my small flock of chickens and ducks just like Jeff! Kenny and Mary are at the help "granny in the bird room" stage and their real canary interest is unknown at this time.

Today, I babysat the youngest boy, John who is three years old. I can't think of anything I have done to spark his interest in birds. But as I paused from reading three little pigs, corduroy, and other books, he stated "Granny, we have a bird cage but we don't have a bird." As soon as my daughter came home, I ask her if they had a bird cage. She promptly replied no we don't have any bird cage. John quickly corrected his mother and informed her it was in the garage! Sure enough John was right!! The cage was one that had belonged to my mother (his great grandmother) and very old. Could this be the early incubation phase of Canary Fever?

John's picture was taken this morning at his kitchen table with his bird cage. If you click on the picture to enlarge it, you will see that one of the wall decorations says Birds Wanted.

John Update: I babysat John at his house again today (Friday 1/30). I thought it was time to invite John to visit my aviary so I began "John, Granny likes birds a lot, so very much that she has lots of birds at her house". John replied "Lots of birds come to my house", and then in a sad tone with a tear in his right eye, he continued "But They All Fly Away". Later in the car, to meet his mom for lunch, he said "Oh no". Then he went on to explain that today he needed to water the plants. Sounding more and more promising! What's a Granny to do?

Special Note: Since 2001, the National Cage Bird Show in partnership with Higgins Premium Pet Foods, has awarded a $1,000 college scholarship to the Youth Division Exhibition Winner at the National Cage Bird Show. Eligibility requirements are posted at www.ncbs.org under Youth Programs. Youth birds are judged at 8:00 am immediately prior to regular judging. A special bonus has been that each of the judges takes a few moments to make helpful comments that encourage the youth exhibitor. Youth winners in each area compete for the scholarship right after the Scannell judging. The youth identification tags are then removed and the youth birds are placed in with the other birds for general competition. At the NCBS web site, also check out the Youth Poster Contest! The winner receives a cash prize and their poster is distributed at the NCBS show! Another excellent idea to encourage youth is a 4-H bird group like Edna Anderson started. They make informative presentations, display posters at various places including the state fair, and exhibit their birds. A year ago, one of her group won the $1,000 college scholarship and the another one won the youth poster contest! Both of these girls also gave presentations at the NCBS seminar during the show. Everyone was impressed by their knowledge and understanding of birds. Working with the Youth issues for the national has been very rewarding as I am moved by their great love for their birds! There concerns are more for their bird and its welfare during the exhibition then whether or not they win!! A special youth meeting is held on Thursday evening to discuss their concerns.
Posted by Linda Hogan at 9:40 AM

Linda,
My heart and prayers go out to you and yours.--Ed Medrano

Thanks Ed. We are still waiting for the tumor staging and the appropriate treatment to be determined. Surgery went fine. As expected the skin graft taken from the inside of the same left leg has left a raw and painful area about 4 inch square. He was dismissed this morning from the hospital. Your concern and especially your prayers are appreciated!
Linda