Prevention - Try to minimize the damage from changing aviaries by making sure you have as close as possible to the same number of daylight hours and dimming. Consider light intensity too, was the bird in a high cage closer to the lights or bottom? And most important is not dropping the day length as this often precipitates a molt. My lights are on 11 hours per day with 30 minutes dimmer. Currently, I plan on breeding in March so when I need to I will be adjusting lighting 30 minutes per week so that I am at 14 hours plus 30 minutes dimming then.

Fixes - The best trick is to low the aviary temperature. Those of you with chicken experience know that dropping temperatures can stop or at least minimize hens laying.

For canaries, I like during pre-breeding to discourage laying by keeping the high at 63 to 65 F and at night let the temperature get down to at least 5 or more degrees lower. My aviary is separate from the house but does have a concrete floor which offers some heat. To keep it cooler, I am using a small vornado brand space heater safely placed far from cages near sink area and turning it on only when I get up in the morning and unplugging it at night when I go to bed. Our temperatures at night outside are generally mid to low 20 F with extremely cool temps to teens when we get an Arctic blast. Today is one of those cold blasts and aviary temperature high is 60 and tonight will be very cold.

Whenever you drop the temperature you must provide more calories as they will burn quite a few more just to keep warm. I add regular uncooked human porridge oatmeal free choice and soft white bread 1/4 slice per breeding size cage each morning in addition to their regular food and water offerings.

Another trick is to to move the hen to a new cage at a lower light level, facing a different direction if possible and with different style feeders than the one she was trying to nest in thus messing up her plans. Although having a nest is stimulating, I will give her a nest and material just to monitor how effective the previous changes are working. If she starts acting interested in the nest, I can drop temperature further. 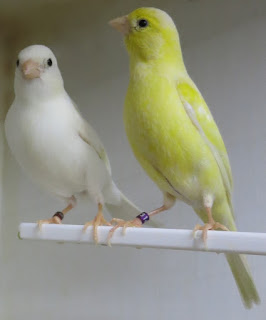 Next, I go ahead and put a male that is not ready to breed in with her.  Over and over, I have had great success slowing the hen down in the early phase by pairing with a male who is not yet interested in breeding. If she is too far along, she will attack him but if peace prevails she will slow down and wait for him to make the first moves. If there is fighting, of course, this idea is abandoned. Once he starts feeding her, she will mate with him and move on normally. I have two possible males. One is much more ready than the other. I put the shy least ready fellow in and no courting is taking place. See his demeanor but she is being nice to him even if he suggests a platonic relationship!

So How is all this working?

Great, she is tolerating him and showing no interest in the nest! 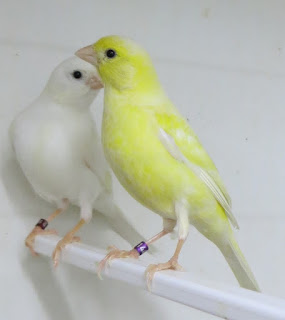 Note his demeanor in the two photos, shy silent type for now.

The main support she needs is calcium. I have started her on calcium gluconate. I purchase it at Tractor Supply for about $6 per pint. It is 23% and sold to treat cattle. I use 2 Tablespoons to 1 gallon of water.  This will help her build up her calcium stores for egg laying but will not stimulate her to get ready for breeding. Once weekly they will get multiple vitamins in the water.

Normally, I start  ABBA Fertility E weekly on males six weeks before breeding and hens three weeks before breeding. None is given to hens after she lays the first egg. For this couple, I will wait till I see feeding behavior to start it or if they are not feeding at four weeks before I plan to breed, I will start them then. Hens often lay 3 to 4 weeks later. Any nestling food will not be offered till the vitamin E is started as at that time it is full speed ahead.

Working great so far! Male becoming more active and even seen him singing a bit! Hen shows no interest in the nest or sitting in a seed container identical to the one she was trying to sit in when I intervened.

Today she laid her first egg. The aviary temperatures has warmed a little as high outside are off and on around 56 F degrees. They seem to be getting along fine and I have seen him sing to her. So will see in two weeks. I am not taking eggs out as I have no place to hold them where the temperature is not low at night. 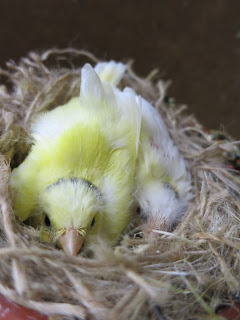 She hatched two chicks and feed them well. Papa was moved to another hen but will be back for a second round!