Most of my breeding cages are the solid bottom and solid on three sides style. I have also a number of wire bottom larger cages that I have used for flights and for breeding.

Once I had a spraddle leg chick leave the nest in a wire bottom cage and he immediately was caught between the wire and broke a leg. After that experience, I always put several layers of paper over the wire to prevent youngsters from this hazard. It also works to completely fill the tray below the wire completely so that the youngsters can not perch on the bottom wire or fall through the wire.

When adults are housed in the wire bottom cages, I  had not had a problem in the five or more years I have used them until recently this Border male got both his wings caught between the wires on the floor bottom and was pinned there also damaging his foot. Luckily my daughter was cleaning the aviary at the time and notice him fairly soon after the accident. I was not home at the time so Sandy knew she must rescue him and carefully freed him and put him the carrier and called me. 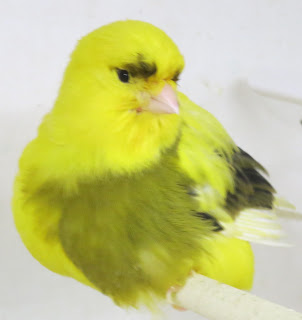 I was concerned that he might never fly and perch again. To begin the rehabilitation, I agreed with Sandy's placing him in the new large carriers as this housing would assure he would not fly.  He held his wings pretty well in spite of the accident so I did not tape them with paper tape as I would if I thought they were seriously damaged.

Two weeks later, I moved him to a solid bottom cage with perches close to the ground. His wings looked fine but I noticed he was slipping on the perch.

I added a more narrow perch but what really worked was turning the perches side ways at about a 45 degree angle instead of the normal straight across position. Now he is using the foot normally and hopefully he will soon be strong enough to stand upright instead of squatting on the perch.

Should he not recover enough for breeding, he mentioned to me that he was volunteering for my artificial insemination project! It is so sad when a nice breeder gets old or hurt and is no longer able to mount a hen successfully and AI offers a way to still pass on his genes! 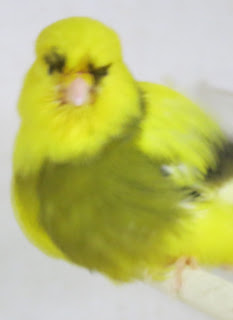