Although this young Border hen looks innocent, she is a real scrapper! 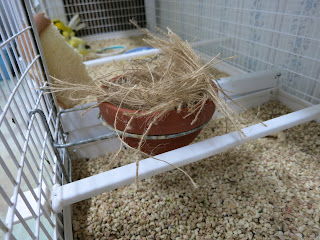 I offered her a nest and she builds in the seed cup. 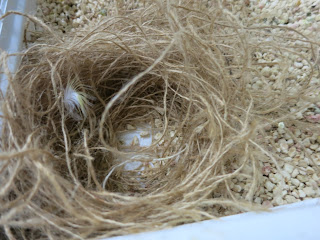 I take the seed cup away and she builds on the floor. I put her floor nest in my nest and place it barely off the floor in the very same spot and she ignores it and chooses another floor spot! This fight went on for 4 days! 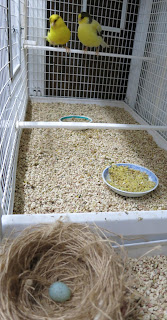 This morning she laid in the nest I had placed just south of the floor nest she originally built in. 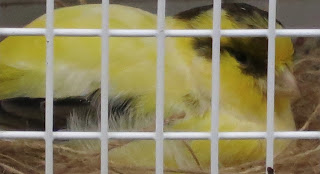 Happily she sits on her first egg. 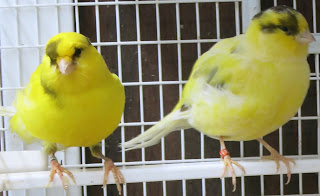 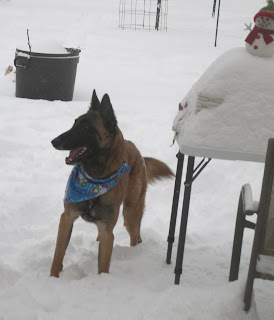 A  widespread snow has blanketed  Kansas and the whole state has been declared a disaster area. Lucca loves it, running and jumping even though the snow is way over his elbows. 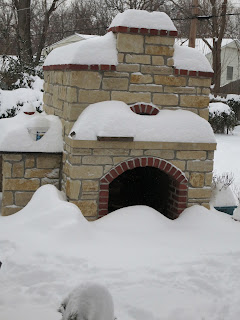 Still snowing with 10 inches so far!! Looks like we won't be firing up the wood oven today for pizza. 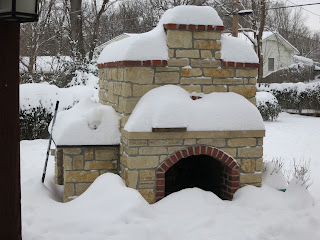 Eight hours later and we are at 14.2 inches. The record is 15 inches and was established in 1962. Wow, it is still snowing but lightly now... Much of Kansas is rural and in those areas major interstate highways are closed (I-70). In open areas drifting is so bad. 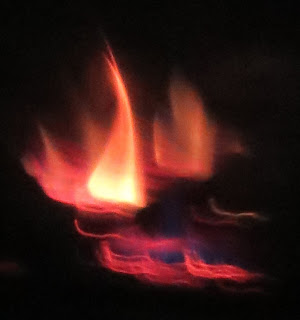 Big Bird is going to put out more sunflower pieces for the wild birds and read a book by the fire!
Posted by Linda Hogan at 7:55 AM

Linda,
I read about you coating thhe seed mix with wheat germ oil.
Did you never experience problems giving it all the way through the breeding season?
Thanks for helping.
Christel

I have a fife hen that is doing the same thing. Grrrrrr she built a nest any place but the "right" place. Not sure she is really ready because she builds one day and tears it apart the next.
Linda, enjoy the warm fire and happy shoveling.... Hoping the more Kansas and Iowa get the less we'll get here in WI. I've spent enough hours behind the shovel and the snow blower. But i'd rather have the snow the the freezing rain tht we got last week.

I have used wheat germ oil coated seeds for many many years with no problems. Originally, I bought it made up from Bird of Paradise. It is the same amount of horse blend wheat germ oil but in addition Nancy coats it with Prime vitamins and Petamine which is just too expensive for that now. At one time I feed the coated seeds year round.

This is the first year that I am coating my own and since I have Biodecken vitamins in the water or orlux, I do not need more vitamins on the seed. In my mix, I also use 25 lbs of L'Avian Plus seed which is vitamin fortified.

During setting, I feed hemp hearts to encourage the hen to sit.

Is this the same hen you had this problem with last year? She was a bugger then too!

This a young hen and one I purchased so likely no relation. Usually, I have a few floor fights but what stood out about this one was it took four days to resolve.