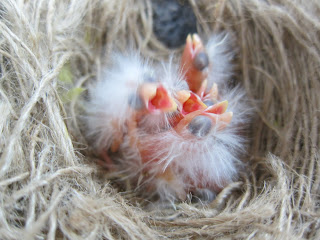 Mario has done it again, five of five!!! 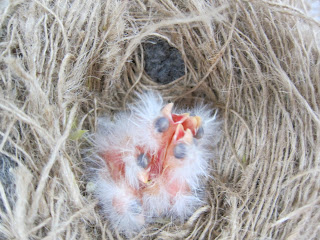 It is really getting late now for pairing. Mario's wing butts show new feathers, he is clearly molting. But I could not resist trying to get a few more chicks from him....so I put four extra hens who had not been paired this season in a breeder cage and four nests. Three immediately built nests and the fourth I lost patience with and removed her. The first hen laid five eggs and hatch five!!

The second hen only laid two eggs and to my surprise, once the other hen hatched these five chicks, she abandoned her eggs and was trying to sit with the other hen on the five new chicks! So I moved the two smallest chicks to her nest and she is feeding them in her own nest! It is much harder to get a hen to foster chicks when they did not hatch under her. 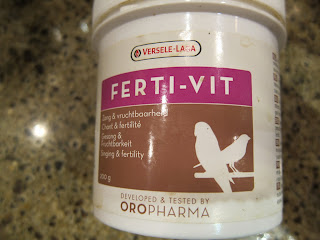 Prolonging male fertility can be a challenge but I credit molting Mario's fertility to using ferti-vit (orlux parent company - ordered from Bird Supply of New Hampshire). This product has vitamins and amino acids and so effective but not overpowering. I plan to use it next year for conditioning. I will also use it on short term (likely three consecutive days, now and then) to tighten up feathers on the show birds. 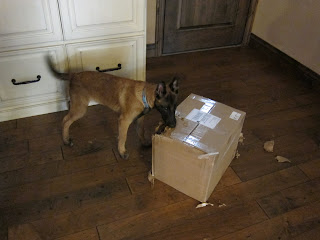 Lucca loves to open the boxes of bird supplies arriving frequently at our house. 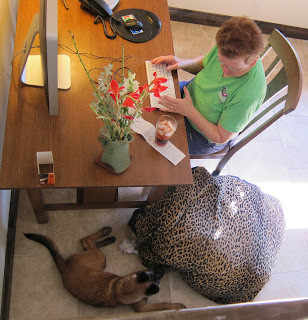 As I write this post, Lucca is helping me? 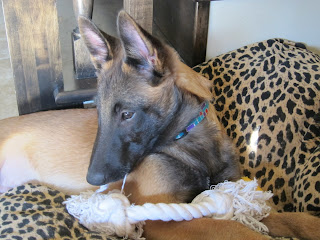 Maybe this chew toy will keep him pacified while I write. 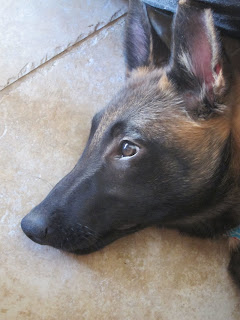 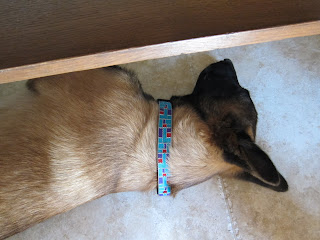 What a beautiful little nest-full (even if they weren't Mario babies!!)

And I don't think I've ever seen a Malinois puppy lying quietly like that, ever. :-)

What a Wonderful Companion you have.
Thank U for the pics of the babies.
Nice to know you are getting a reward for all the extra effort you went through to get your import birds healthy.

How do you add the ferti-vit do you add it to birds diet or to the water?

Linda,
Outside the breeding season you have to change the FERTIVIT into OMNIVIT, same product, but with less Vit E.
Christel

When do you stop breeding for the season...

I used the fertility vitamin in the water and changed it daily. I do have the omnivit and will start experimenting with it now that breeding season is over.

I prefer to stop breeding when the temperature outside hits 100 for the first time, generally that is around the first day of Summer. This year it was 100 and over in May...Some years we have maybe a half dozen 100+ days but this year it is endless.