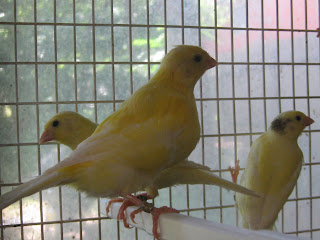 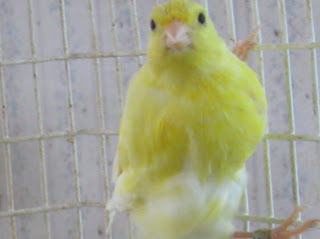 Another Shot of the Promising Star showing the chest depth. I can not help fantasizing about the deep tone he will produce!

Every year during molting season, cocks lose their brain's song region function and stop singing. To sing again after the molt, they must self-repair nerve cells and brain circuitry in the brain song-control region. This unique canary brain regeneration happens naturally and coincides with their normally increasing testosterone levels after the molt.

Young cocks start rudimentary attempted singing or babbling called sub-song, when they are only one or two months old. Their mature song develops much later when they are about six to eight months old. It is often erroneously assumed that free singing during their first molt is an indication of a young virtuoso but when their mature song develops, invariably early free singers are disappointingly the worst quality sings of the bunch! Free singing during the molt does not bring quality sound but by overworking the syrinx during early development, the potential for a real virtuoso developing is nil.

Therefore, rather than promoting singing frequency during the molt, the goal for singing birds during the molt is body and syrinx development, which will support high quality singing when Fall comes! So than, how do we keep a singing bird quieter? Shutting off artificial lights is important because it quiets the singing and prevents overworking the syrinx, shortens the molt, and also it resets their biological light sensitivity clock.

Singing competition cocks will also need to be heavy, as they sound the very best when they are fat and losing weight and they will lose considerable weight at the shows. In addition to seed mix with sunflower chips, flock raiser, daily white bread, greens, and egg food (which has lots of cous cous etc), they get petamine breeding formula, and occasional toasted wheat germ. For rollers, go lightly with the toasted wheat germ as it is fortified with vitamin E. and you do not want to push them into breeding song. They also get poultry vitamins and water soluble calcium in their water like all the birds but after the molt, the show song birds will be switched to distilled water only. After the molt during September, I will be adding more song enhancing seeds and carefully controlled limited amounts of bee pollen granules till show cage training.

Rollers compete best in adolescent boys song and once they sing the breeding song they are over the hill for competition so I want to bring them along slowly and once I am within a month of competition the diet in the show cage will be primarily rape with a little canary, some white bread and plain water. At that time, they may get a few sprouted hemp seeds as needed for individual birds that are too slow in their song development.

Critical Concept: For highest quality song, keep young cocks in subdued light to limit their singing so that you will not overwork the syrinx. Provide them with high calorie nutritious but fattening diet during the molt which includes high protein foods and controlled amounts of additional vitamin E to slowly increase testosterone production.