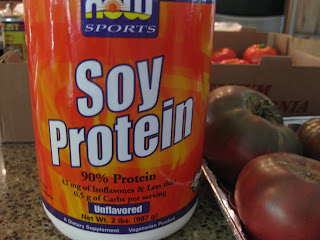 Could not resist showing the Soy Protein with some of my heirloom tomatoes. Remember how I reported a bird ate some of my seedlings, these are from some of my seedlings the bird left and are the black tomato variety called Black From Tula, very delicious! The box in the back includes Celebrity, Tigerella, Mortgage Lifter, Cherokee Purple, Roma, Rutgers, Juliet, Pantano Romanesque, Paul Robertson, and Black Krim.


Preventing Cannibalism and Mutilation By Other Birds

Feather picking by hens who are frantically wanting to start another nest is fairly common. Yet during the molt, the risk of feather picking again resurfaces as an issue when birds are mutilated by other birds. This brings up living conditions issues from housing to lighting and diet.

Overcrowding due to increased bird density is the number one issue in the mutilation problem. Prevent overcrowding by reducing the number of birds in an enclosure or get more cages but always remember that the fewer birds per cage the better.

Aggression is more likely when birds are overcrowded in small open enclosure where less dominant birds have less opportunity to escape. Be sure an offer safe places such as swings or use perch dividers so that a timid bird has a place to go out of the reach of an aggressive bird. Even increasing the number of perches and feeding station will give some relief as it to reduces perch and food competition. It is also helpful to remove particularly aggressive individuals from victim birds.

A very common mistake that promotes mutilation is adding new birds to an established group of birds, as this upsets the already existing social order. Rather if you need to regroup birds move them all simultaneously to a new cage setting to totally disrupt the established social order.

Another important factor in the feather picking issue is bright lights. Under bright lights, birds are more aggressive, mischievous, and activity. So in addition to promoting molting, subdued lighting has an additional benefit in that it greatly reduces the risk of feather picking.

Reduce the Amount of Animal Protein in the Diet:

Behavior is greatly effected by the amount of animal protein in the diet. The more they eat animal protein the more aggressive they become! It may be only feather picking but in extreme cases where extremely high levels of animal protein are fed such as feeding monkey biscuits or baked chicken, cannibalism and even eating toes can result.

During the molting phase, weaned birds should not receive large servings of egg food, just small dishes and no more than once a day. It will also help calm the birds if you reduce the amount of hard boiled egg in the egg food and add additional soy protein powder or soy grits, more carrots, and more cous cous or wheat.
Posted by Linda Hogan at 8:23 AM

Hi, I have a great female who signs a beautiful song. I wanted to get a male for her and so I did. He sings constantly and they mate often. He has a super pointy beak and chasing her around. She seems ok with eating,bathing, etc. She has a few spots around her eyes where he has gotten her. I call him my bully. She constantly lays eggs but they are not fertile. He tries to prevent her from going on the nest. I took the nest out and she lays eggs and make a little nest in the seed cup. I keep a close eye on them and I'm afraid if I seperate them, the aggression will be worse when I put them back together. He feeds her sometime and they seem fine. I don't want her to get hurt, she is so sweet. I have never had a male with such a sharp beak, could a vet grind just the sharpest point down? I'm not sure what to do.

Using human nail clippers you can trim the tip of the males beak. How fast the beak grows depends on protein levels in its diet. Drop any hard boiled egg as too high protein levels bring on aggression. Separate the male and hen in a divided cage so the male can feed the hen through the wire between the cages. Give him greens and not the hen. She should want some and go to the wire and beg. Once he his feeding her, it is generally safe to put them together but may take a few days for his aggression to improve after a diet change. If he continues, only put him in for mating and remove him. Ideal mating is five days before laying.