Does It Work? Poultry Conditioner

I have been very pleased with MannaPro Poultry Conditioner. A number of birds showed remarkable improvement, marked narrowing of the tail (piped), improved wing carriage, and overall tightening of their feathers and health. Not being able to put birds down, I keep a special cage just for the old timers and they perked right up on MannaPro. But what really impressed me the most was "She". 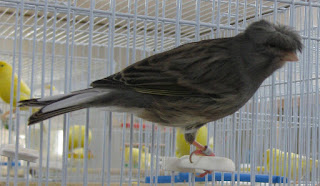 "She" is a Lovely Crested Columbus Fancy and was originally sexed by the breeder as a Hen. I gave her every thing I could think of - lots of vitamin E etc but "she" just would not come into breeding condition! In fact, "She" failed to lay a single egg!

Being a last year bird (2011), "She" kept her sex a secret until I feed her MannaPro Poultry Conditioner and the very next day her secret was out, "She" started singing just like the other males!! To test it, I took him off the MannaPro and sure enough no singing but each time he gets MannaPro he starts singing again!

("She" is a hard bird to photograph and was flying wildly till I thought I would not get an acceptable picture. "She" looks better than this as this was the last shot I took and he had been frantic for a half hour as I just kept shooting.)
Posted by Linda Hogan at 8:28 AM

Linda,
I like before and after pictures to, I am thinking of giving this a try you said you feed it once a week what amount do you use...

Depending on how the bird looks, I feed it once a week (probably about a teaspoon) or in some cases where I might see a dramatic improvement, I fed it free choice.