Is The Smaller Chick Getting Enough To Eat? 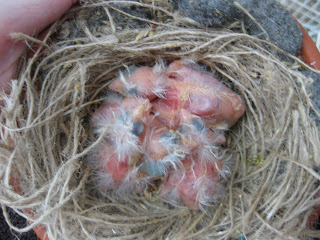 Normally, I take the eggs out as they are laid and put one plastic egg in the nest after the first egg is removed. The eggs are replaced after the fourth egg is laid. With chicks hatching on the same day, they all have an equal chance to be fed.

Here the eggs were not removed and the fourth chick is so small compared to the largest that it might not be getting fed well. I supplement it with Kaytee Exact Hand Feeding Formula for all birds. 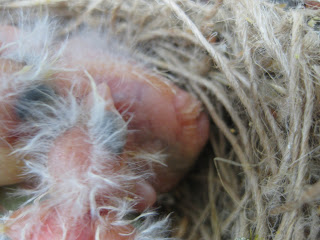 When chicks are doing well, they have a nice rosy pink color and around the rump you see a fat layer being deposited just under the skin. Click on this photo and note the fat layer. 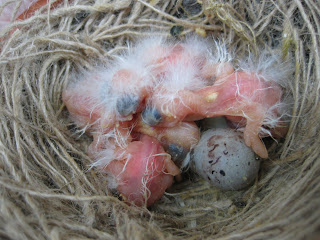 What a relief to see a small fat layer forming on the small guy on his rump (click on photo and look carefully as the fat layer is visible in photo on the left side), he is doing well in spite of his small size.
Posted by Linda Hogan at 12:09 AM