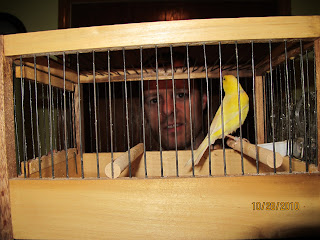 Almin pictured with his favorite bird from the team that won in Tulsa!

On Wednesday before the German Roller Show on Saturday, Almin shipped two teams to me via Delta counter to counter. The birds traveled from Washington State to Atlanta then back to Kansas.

Upon arrival, I offered them baths before placing in show cages. I first stacked the birds Thursday morning at 8 am and was in a panic when only two birds of each team sang. But when I tried again Thursday afternoon, all the birds began singing! It seems that the birds were operating on a much later time zone and traveling to Kansas didn't change that!

They had beautiful tone and tours especially hollow roll and the bird pictured has a wonderful falling deep do do flute. The best I could hope was that my teams would learn something from them before Saturday! When I told Almin, I was going to use his birds as tutors, he said "Go For It"!!! What a good sport!!

Well using them as tutors was just wishful thinking but I did thoroughly enjoy listening to them Thursday. On Friday, Doyle and Cheryl Johnson, and I with birds traveled to Tulsa for the show. Friday, the day before the singing competition, typically rollers are not sung to make sure they are anxious to sing before the judge during the show, so I had to wait till the actual competition to hear them again.

After returning home Sunday morning, I felt like an afternoon nap so I stacked Almin's birds and left them out singing to me while I slept. Wow!! what dreams. Something about hearing good birds sing while sleeping is my most favorite thing!!

Monday, the birds flew back to Washington via Minneapolis on their way home. They arrived in great shape but didn't sound quite as good as when he sent them as "Granny Big Bird" had feed them some extra carbs to beef them up a bit before the trip home! Once back on Almin's feeding regime, in a few days the effect of the high carb treats will wear out and they will again sing a soft mellow beautiful song!

Thanks so much Almin for sharing your birds with us!! Can't wait to breed the six roller hens from his best (German) hollow roll stock that he sent me in the box with his teams!!

Great story, and it's in the tradition of shipping rollers back and forth to perform with out their owners.

Hi Linda, have you decided on mates for those hens Almin sent you.