A couple of days ago, it finally dawned on me that a hen who built her nest on March 4th, still had not laid an egg!! So I began thinking about the factors which congruently come together when a hen lays an egg.

1. Longer days in photosensitive hens. To be light sensitive the birds must have experienced a period of several weeks where the day length is 6 to 9 hours prior to a minimum of 12 hour day for inducing a sexual response.

2. Qualitative and Quantitative availability of foods. Higher protein levels and plentiful foods including greens signal the breeding season is beginning. Lack of an adequate diet may totally prevent laying because the calcium, vitamin A, and other nutrients are not available for egg formation.

3. Changing hormone levels. The hen experiences high levels of Luteinizing Hormone (LH) and Follicle Stimulating Hormone (FSH) in the second stage before laying. The third stage involves additional hormones and results in rapid yolk deposition and normally occurs when a mate is present. Courtship and nest-building precede this stage. Having the breeding song in close proximity can sometimes fool the hen and she may even assume a mating position which the timid male can take advantage of to get the job done.

The most obvious problem is the absence of courtship behavior! Remember how I was afraid she was going to lay without the male even presence so I paired her with the male even though his vent was not developed. She built her nests and even when his vent got better no courtship took place. She continued to sit and in the process lost some weight and with eating less, her LH hormones dropped and if allowed to, she would sit the entire season!

The first thing I had to do was take the nest away! Sometimes, hens without a proper nest will try to make a nest in the seed dish. 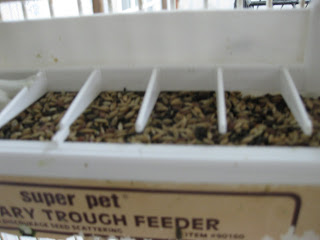 The plastic dividers in the seed dish, greatly discourage nest building in the seed. 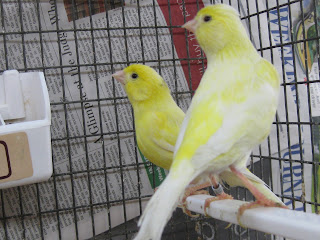 Both birds were more active once the nest was removed. To encourage the male to sing, I added a dish of bee pollen, hemp and wheat germ. Wheat germ is not normally given to hens as it pushes egg laying. 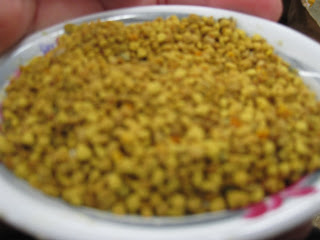 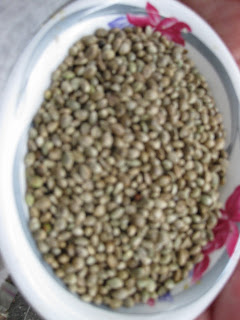 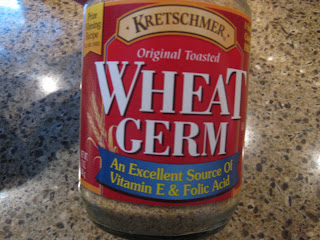 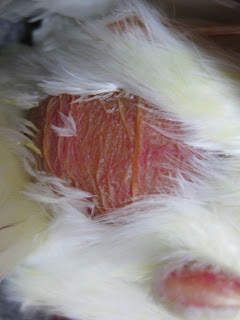 A couple days ago. 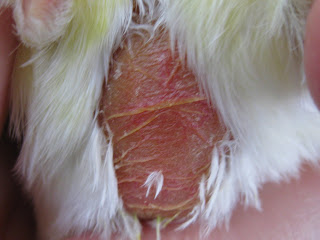 Today, some minor improvement in heat and redness. She feels warmer but not really hot, can she be ready? Is it all the male's fault?