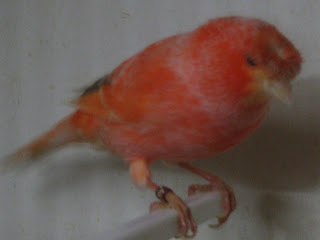 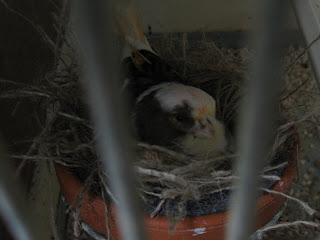 She had built a nest which was well filled around the shell but had stopped too soon before filling in the center. This leaves her nest very deep and open, so with an Oh well....she snuggles in contently. 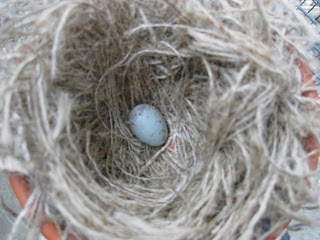 Hoping she was not finish building yet, I check the nest but she had already started laying her first egg of the clutch. Note how deep the egg is positioned in the nest. 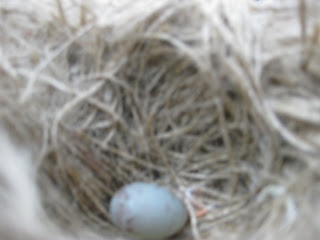 This shot shows just how very deep her nest really is! The danger of this deep nest is the hen may be held up too high from the egg to make good contact between her bare breast and the egg. If the eggs are fertile, they may not hatch because of poor incubation temperature. The deep nest also discourages nest mating.

Even though she has laid her first egg, it is not to late to encourage her to fix it! Just remove the first egg and instead of replacing it with a plastic egg, put a bunch more nesting material right in the center. Some people like to shape it for her with an object such as a small light bulb. Instead, I just fill the whole with nesting material and leave the fixing up to her. 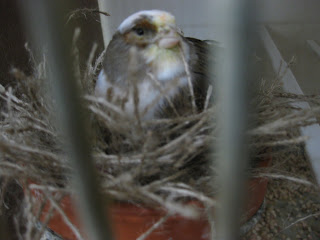 At first she looked at me in disbelief! You want me to do what? You sure made a mess of things!!!! 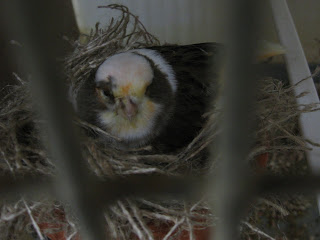 But the next morning when I checked her, the nest was much better and she had laid her second egg. 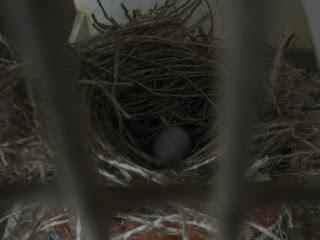 The second egg was then removed and one plastic egg was placed in her rebuilt nest. It is unnecessary to replace each egg with a plastic egg. Rather one plastic egg is enough for the whole clutch!
Posted by Linda Hogan at 7:12 AM