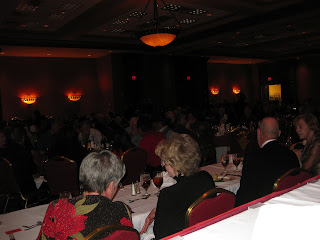 View from the head table. 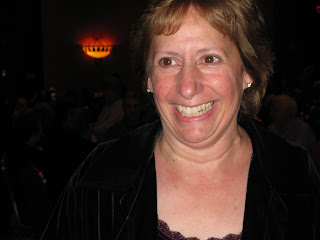 Jan Davie stop by our table to visit. 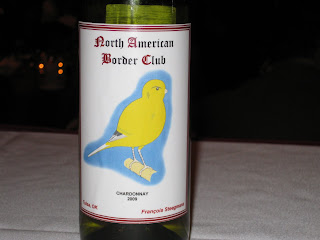 Board member Don Platz, setting on my left, shared his wine he won from the North American Border Club for making the top bench in the Border Division.

The first award was the 2009 NCBS Service Recognition Award. This award was established in 1981 to acknowledge those who have given notable support to the NCBS.

The excitement of who won the Service Award was building as the following clues were read: A face everyone knows who is a member of NCBS, Has bred and shown every kind of bird from budgies to songbirds, Been NCBS member for 25 years, Board member many years working on shows in many areas, Assistant show manager of Houston 1993 show, Supporter of all songbird divisions. That could only be one person Dorothy Eggers!! Congratulation Dorothy!! 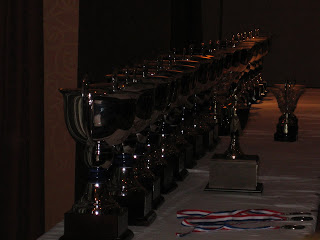 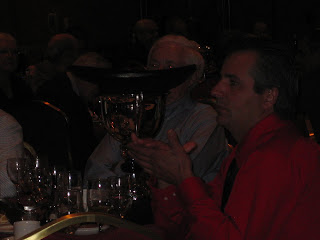 A Higgins winner is using it to hold his hat! 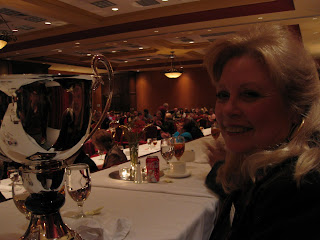 Board member Debbie Eaton set on my right. We visited and enjoyed the banquet, Yet, she never even hinted that she had won her first Higgins!! When they announced her name, I was so shocked and happy for her!! Way to go Girlfriend!!!

After helping other board members with check out, Doyle, Austin and I hit the road back to Kansas arriving at my house around 3 AM! Looking forward to Jacksonville, Florida next year!
Posted by Linda Hogan at 9:44 AM

Thanks Linda for taking such a good picture for me ! I can show it to my family - who are so proud my little bird won.

Girlfriend - love your good work on this blog.