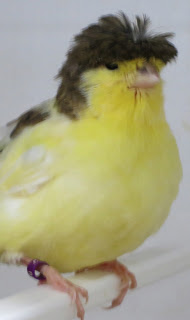 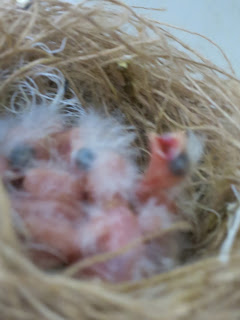 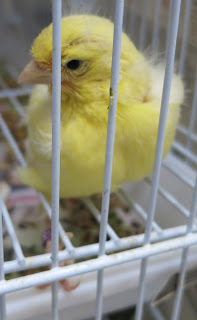 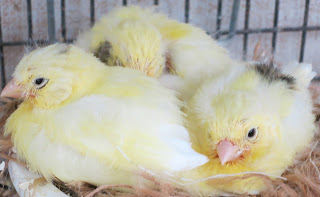 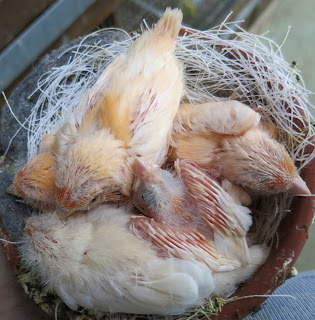 Stafford Nest When I banded the fourth chick I found a surprise small 5th one! Note the whitish chick in the foreground. It is a mosaic. Also notice how much baby fuzz it has on his forehead, that is a early clue that it was going to be a mosaic. 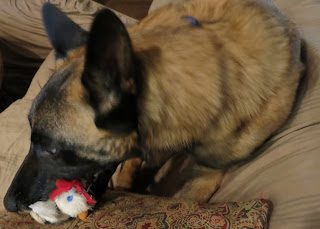 Lucca with his new crowing rooster Easter toy. Getting this toy for Easter during breakfast this morning, it already has lost it cute red comb.

Big Bird is very proud of the Wichita State Shockers who won the West Regional last night and are heading for the Final Four NCAA Basketball Tournament! Would love to go but alas too many baby birds! Go Shox's!!
Posted by Linda Hogan at 8:13 AM

Hi Linda,
I would want to ask you if you have any tips for getting a border cock in breeding condition.
I have done the weekly vit E and the wheat germ coated seed, works fine, just for one. He looks good, not sick, but lacks libido!
Thanks,
André

Some are more difficult than others. Make sure he is not on the thin side as those seem to never come in breeding condition. If so, give sunflower pieces and make food available without as much flying and extra perches.

I would also give him wheat germ mixed 50/50 with brewer's yeast and a separate dish of bee pollen. He should also be in a cage with other males as fighting brings them in.

Turn lights up to 14.5 hours as an increase in day length will help too.

You can also give him soybean products but make sure they are edible and not treated for planting. I get them at the health food store either the whole dry bean, soak in hot water, grind in food processor with brocoli and cauliflower or I got the frozen edamane in pod and thawed and processed in food processor and added to cous cous (warm water and olive oil) with poppy seed.

your tip for recognizing mosaic chick is excellent
thanks