Failure to Thrive - Wasting Away 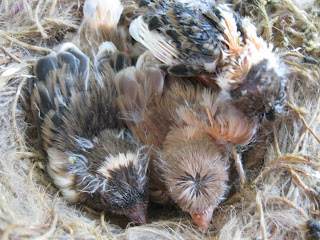 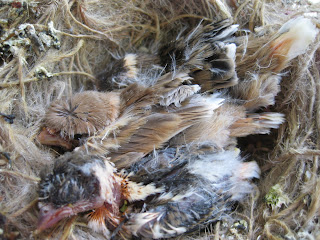 This nest of three Stafford Chicks were well fed but one chick failed to thrive!


Although all three chicks hatched on the same day, one lagged far behind. It grew very slowly compared to its siblings and was banded three days later then they were. At about that same time, the other two chicks were ravished and I began supplementing their feedings a couple of times a day with Kaytee Exact Handfeeding Formula.

While two of the siblings stuffed themselves and kept begging till their crops were unbelievably full, the poor growing chick would take a bite and then act like it was chocking. Its crop just would not expand like it does normally when a chick is fed.

Having seen this once before last year in the same line, I am certain that this was a congenital birth defect. This chick lived another week but then expired. Even though it was a week after banding, his band had fallen off because he was so emaciated. This is a sad scenario but much less so than if it had been caused by a virus and was contagious.
Posted by Linda Hogan at 8:41 AM