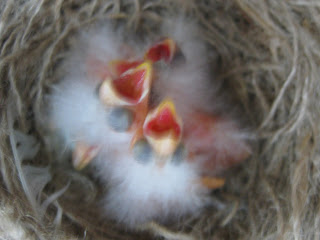 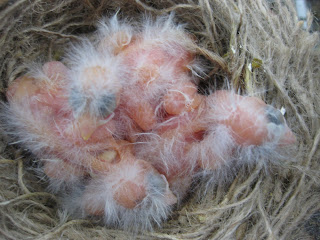 On May 19, 2010, I wrote an article entitled "Beware of Making Momma Mad". This was the story of one of my DKB imported hens from breeder 3503 bird #32. This hen came out of quarantine in Canada on January 26 and was bred to A DKB Bartel male in Canada and raised four chicks in February before coming to the states.

It took a lot to get her back in breeding condition but she finally reluctantly bred once while mostly fighting with my 3501 male. On May 19th, I banded her one chick right before I left for work. This was a bad mistake as without my knowing it, she had promptly threw the stuffed large chick out of the nest. The next day when I found the dead chick, I put it back in the nest for closure and within a minute she had stripped the band off the dead chick!!

Feeling so sad about losing this precious chick, I decided to try one more time with my 3501 male even though her first nest was February in Canada. To my absolute delight, she hatch five chicks!!! She is feeding well and both she and I are happy!!! The fifth chick hatch later then the others so I have fostered it to another hen.

I am totally amazed that after all her travel etc that she actually produced this nice clutch and it is so late in the season!!
Posted by Linda Hogan at 10:03 AM

Arent you concerned about banding them?? I would be concerned she will go bonkers again over the bands.. How will you treat this time different?
Carol
ps your banding tool will go out in the am..

Last time I made several mistakes...

One banding right before leaving, this time it will be first thing in the morning and I will be checking periodically...

Second recognizing the potential of the problem which is much more common when you have just one chick. With one check, she can easily see the band.

This time there are four chicks in her nest (one was fostered). I code my bands by putting some on the right and some on the left and some right side up and some upside down. Even with out plastic additional band each is coded.

These chicks are banded right side up on the left leg. I will keep moving the smallest chick to the far right side of the nest and the largest chick on the far left. This should take care of her catching side of the bands...If there is any trouble, I will blacken the band...

I think you work nights, but I always band just before lights out. I then check the next morning and evening. Instead of blackening the band, I have been known to smear with poop. I know!