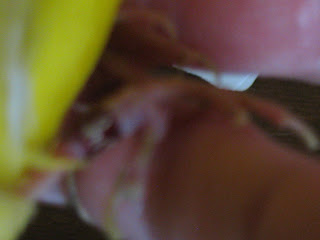 While cleaning this young borders feet, I noticed foot swelling around the band. The band should move easily up the leg but this one was stuck!

First, I oiled the foot with some flax seed oil that I happened to have in the aviary. I wanted to get the oil inside the band but it was too tight to even let oil slide in!!

On occasion, older birds sometimes have excessive scales on the entire leg which will obstruct the band. They can be softened with oil and gently removed. Usually these old scales come off in long sheets and eventually the band is free again.

This time the bird is young and does not have excessive leg scaling. So I reasoned the problem was debris build up inside the band and I needed to clean inside the band to free it.

If I use a needle or sharp object, I might accidentally injure the foot and perhaps destroy the blood flow which could cost the bird its foot. This started me thinking, what do we have in the house which is pointed and thin and not sharp??? 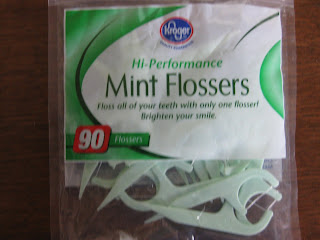 Quickly, like a flash of brilliance, it came to me, my husband Pat, likes to floss his teeth with these plastic flossers! The pointed "picking"end would make a perfect bird tool to slip inside the canary band and ream it out!!! 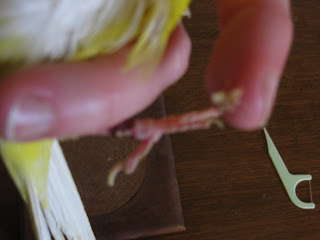 Working patiently, I began picking at the inside of the metal band and to my surprise, I was getting huge amount of old scale debris. The amount I removed was shocking! All of this debris came from the inside of this bird's leg band!!! 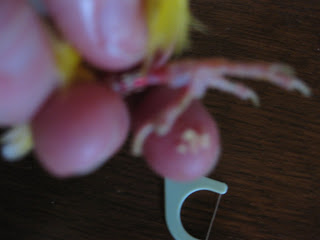 Eventually, I was able remove all the band debris and free the band. This exposed a very small leg with a sore area where the debris coated band had been constricting the leg. I treated the leg with more oil and then applied some iodine .

Today the band was stuck slightly again but with a little oil, it was freed and the leg is better. It is possible that there is a burr inside the band that is irritating the leg and causing this problem, if it does not heal in a few days, I will remove the band. 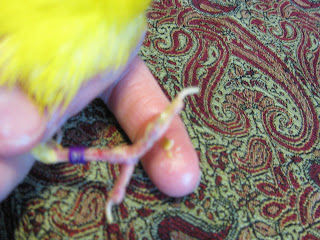 This started me checking other birds. I found another bird, an older hen with the same problem and she also has a slight sore area under the band. Her band was stuck but she had not developed the swelling yet.

When you trim nails and beak, be sure a check that the band is not stuck, if it is, oil the leg and if needed use the pointed end of the plastic flosser to carefully debris it!!
Posted by Linda Hogan at 9:39 AM

I had this very problem with one of my best stud males. Mine was compounded by him starting to pick his center toe to the point of bleeding. I decided to remove the band. I softened the scales with neosporum (someone suggested Preperation H) I then made two cuts with my band removal tool. He continued to bite the center toe until it was "gone". Now the gap beneiththe band has brindged/healed. Your dental floss tool is a good idea if caught early enough.

I would assume that this is a closed band. Is there a tool that is available for removing closed bands?

"Stuck Leg Band Problem"
I have found a small pip cleaner works very well. I have used neosporm it seem to bring down the swelling very fast.

These are closed bands. and yes gou can buy a band remover.

my lovebird leg band is too tight on him i cant take it out because i'm afraid to hurt him what should i do?

Thank-you so much. My Canary thanks you too!