Wonder if I'm getting the real stuff or the placebo? 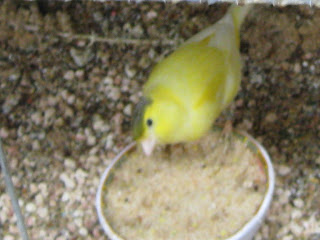 Whichever it is, it tastes great!!!

And finally, higher levels of protein, particularly methionine and lysine, help birds reach full breeding condition. Proteins, although some of the best foods for birds, especially when bringing into breeding condition, molting or rearing young, when given in excess can cause a wide array of problems such as aggression, sealed chick vents, and pasted vents in longer feathered birds.

Proteins are made up of amino acids, some of which are considered a dietary essential as they can not be manufactured by the body and must be provided in the diet. The quality of the protein is determined by the balance of amino acids and the ability to be utilized which can be interfered with by interaction with other substances, such as simple sugars forms a complex making lysine unavailable to the animal.

Hard boiled eggs are a popular source of complete protein and are exceptionally nutritious. On the down side, feeding animal protein can produce aggression, a serious compatibility problem, and when too much is feed a bird may develop health problems such as gout and kidney damage.

Better and easier protein conditioning can be accomplished using complimentary plant foods that are high in amino acids such as soy which is especially good for breeding condition, brewers yeast which is a great conditioner and is also high in B vitamins, and bee pollen which is not only high in amino acids and vitamins but very low fat.

Oh no, One More Aviary Experiment

With so much to think about, is there a simple way to condition our birds and meet their amino acid and vitamin needs? Until this year, I simply used only two supplements with a few natural products, ABBA fertility water soluble vitamin E and an amino acid and vitamin supplement called Miracle. Miracle is made in Italy by Canariz and distributed by ABBA Products. I added Miracle to dry ABBA green and feed it as a conditioner to get the birds ready for breeding and then added it to nestling/eggfood which I fed once the birds were paired till the hen was set and then again on the day her first chick hatched. Recently, I was very disappointed to learn that ABBA is no longer carrying Miracle. I was very vocal about my displeasure and when I received my order, they included a number of samples of Breedmax.

Breedmax is made in Belgium and has been used by fanciers in Europe for many years. After examining the list of ingredients which included toasted soy and numerous other grains and additives that covered mineral and vitamin needs, I decided to design an experiment with it.

My results are still very preliminary but I have done some experiments that controls other conditioning variables including diet, day length, vitamin E, sprouts and heat. I used one tablespoon of Breedmax to one lb (4 cups) ABBA green 92 as suggested in the test group and plain ABBA green 92 in the control group. This was offered to each group three times a week.

To my surprise, I observed positive changes in the test group even after only one week, 1/3 of the roller, stafford and colorbred cocks are dropping their wings and doing a breeding ritual dance! Movement has increased on the border cocks but still waiting for the dance! Even in the dancing cocks, there is no apparent aggression. Imagine mating dance and they are still on natural lighting, getting up with the sun and going to bed with the sun and aviary lights on only 8 of those hours!!

Like the ABBA water soluble vitamin E fertility vitamin, this too is a measured amount and takes the guess work out of dose! Because of the great preliminary results, I will use it in addition to the weekly ABBA vitamin E treatments!
Posted by Linda Hogan at 8:05 AM