Troubles at the Hogan House 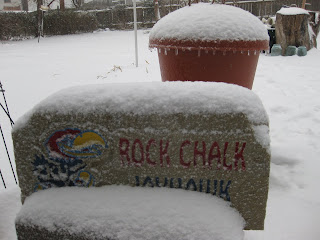 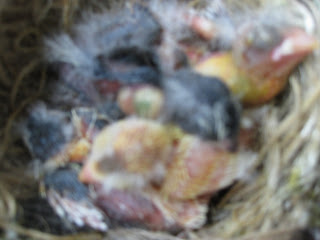 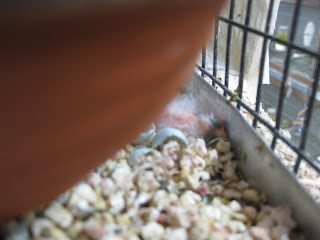 Oh no! Just how bad can it get?

Last night my beloved Kansas Jayhawks Basketball Team, led 37 of 40 minutes only to lose to the Michigan Team in the sweet sixteen! What I can savage is a hope that now with the loss, Collins and Aldrich will not jump ship to the NBA like last years national championship team! Oh well, I can't wait to see next years team!

Then another blizzard has hit. The nearest town West of Wichita, Hutchinson, has 18 inches of snow but the next town West Pratt, has 28 inches !! We have layers of sleet and then thinner layers of snow and it just keeps coming down! I work tonight at the hospital, hope I do not get snowed in.. I did once and had to work four straight 8 hour shifts before help could get in and then those who rescued us, were snowed in for three more 8 hour shifts.. Gone are my daffodils and tulips, gone are my beautiful seeding chickweed!!.. Oh well...

Yesterday evening, I noticed a chick with an unbelievable amount of egg food in its crop. On closer examination, I noticed it felt cold and clammy, the skin in the lower abdomen wrinkled and totally liquid droppings were all around the edge of the nest. There was no expected fat layer visible under the skin on the rump. The chick was literally gagging and I could see the food coming partially up into its mouth...When I palpated the crop, it was hard. I tried to empty the crop and warm the chick up but alas it was too late and the chick was dead this morning. I took all hard boiled egg away from this hen except what is in the egg food, provided a clean nest, and offered a dish of pure ABBA green 92. I had offer some romaine lettuce yesterday so I am not sure about whether it might have set this off... so no more...One more of the chicks has the wrinkled lower abdomen like dehydration but I think maybe I can save three of the four.. Just like my Jayhawks, I lost this one. Oh well....Usually, I stop the plain hard boiled egg when the chicks are banded but this hen was not feeding the egg food as well as I liked so I made a bad decision to keep her getting hard boiled egg..I will introduce pure hard boiled egg again when the first chicks leaves the nest as it is an easy way to wean the chicks...

Now this morning I found a chick on the floor. After taking a quick photo, I warmed it up in my hands and placed it back in the nest and readjusted the nest to make sure it is perfectly level and provided a perch slightly higher than the nest so the hen will fly up and any chicks will more likely fall into the nest when she takes off. This chick will likely be fine! I always warm them up before declaring them dead as when they are cold they can look dead but they are not.
Posted by Linda Hogan at 8:25 AM