An Then There Were Four! 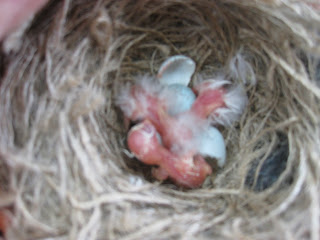 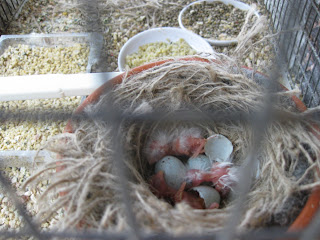 At 14:-00 yesterday, immediately before I left for work, I checked the new chick and was delighted to see that two more chicks had hatched. This morning the fourth chick hatched, so looks like I was lucky as all four chicks hatched in a 24 hour period! It is not uncommon for the hen to wait a bit to start sitting and to get her full incubation temperature. When that happens, the chicks will hatch within 24 hours. It could have gone the other way, with chicks hatching over two to four days, so again the luck of the Irish was with me!

The photo shows a chick that is 1/2 out of the shell. I carefully helped him the rest of the way out. Should there be any drying of the shell to the chick, loosen with a tiny bit of water to avoid damaging the chick!

It also shows an extra 1/2 shell still in the nest. This needs to be removed as it can easily piggy-back onto another egg and prevent that egg from hatching.

There was one egg that was infertile. I leave infertile eggs in the nest till the chicks are bigger to help protect the chicks from the mother sitting too tight and squashing them. I also added a plastic egg so the four chicks are protected from getting buried in the center.

Yesterday, I offered the hen egg food and 1/4 of a hard boiled egg. I observed her eating the hard boiled egg yolk and that is a very good sign she will feed the chicks. Fresh food was again offered before I went to work. If I am off, I offer fresh food three times a day. This morning, I put out fresh egg food and 1/4 quarter hard boiled when the light came on. I think getting in the aviary and feeding those extras to any hen with chicks makes all the difference in how easy it is to get the chicks to thrive. I also noted this morning that one chick had food in its crop and the chicks were fluffed out evenly. This is a sign that they are being fed. Their color was a good rosy pink.

The very best thing I can do besides offering fresh food is to give the hen her privacy! She will feed naturally if I leave her alone! That means spending the least amount of time in the aviary possible but also avoiding eye contact with the hen when I am in the aviary!
Posted by Linda Hogan at 10:14 AM