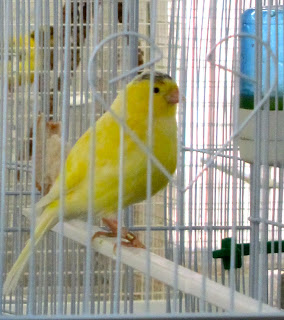 This is the German Roller Hen whose vent was developing rapidly but was setting and setting on her perch and showing no signs of frantic flying and other pre-breeding activity. After a dose of iodine she started moving some but continues to develop anatomically without appropriate breeding behavior. 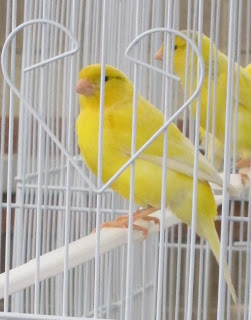 Beautiful German Roller male, from German Stock, was given to me by David Bopp at the National Cage Bird Show last November. Not only is a good looker but he also scored a 16 in hollow roll under the judge Steve Billmire! 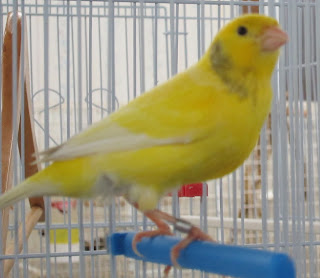 Is he not a handsome dude? 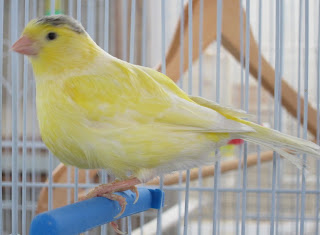 This beautiful German Roller hen, from German Stock, was a gift last year from Almin Omic and has brothers on his winning team last year.
So far, he has fed her in the divided cage but when put together, they both have no interest in the other. I have four breeding ready cocks in a nearby cage singing the breeding song to her and have moved him to a ready hen who he mated with. If she would squat when she he hears them sing, he could do the mating!
Perhaps on Valentine's Day, after a nice nestling food dinner and dance the romance will take off.

The most that happened was she carried some nesting material, that was it! She did not even put it in the nest.
Posted by Linda Hogan at 12:05 AM

I'm curious. In a recent post you said you have 75 hens, between your different breeds.

I know you hold down a full time job, so do you have help with your birds?

I'm assuming you must have, because apart from the basic day to day care, the amount of cleaning etc would be huge.

Plus all the different foods and supplements you offer would be a lot of work for so many birds.

I love to breed and care for my birds myself but I never like to sell them. I am planning to cut down about 30 - 40 or so hens and maybe 20 males. This will help me make room for chicks which is the only thing that would motivate me to cut back.

I have a 23 year old grandson who when he gets short on cash, will help me change all the cages. I hope that happens to him at least every three or four weeks!!

I work 24 hours a week at the hospital most of the time so that also helps. In the past, I worked two jobs for 31 years plus the birds so actually I have it a lot easier now. I keep moving most of the time and my biggest time problem is how much time the puppy Lucca took, that was more time consuming than two jobs as he is a Malinois. A very busy boy!!

I watch very little TV. Only after the birds are down for the night. Love Downton Abby, Glee. House and Mostly Basketball. I am juggling my birds as I will attend the MVC basketball tournament in St. Louis March 1 to 4 and would rather not have any chicks hatch while I am gone.