Please use this post for tips and questions unrelated to current posts. 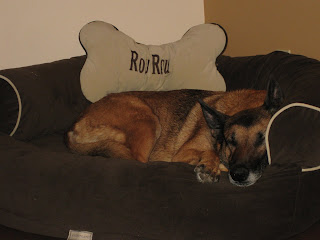 Bella, aka Rou Rou, enjoying a morning nap. Remember last Summer when I was so grieved when my other Malinois Tosca had cancer and had to be put to sleep when the hemorrhaging could not be controlled. Tosca was 14 years and two months, the oldest survivor of his litter. Blog followers will remember how down I was and how even posting was difficult for me during that time.

Great News!! Tosca's breeder Sue Haase of Lake Tahoe, Nevada, decided to breed a new litter as all of the people with puppies of that litter were so fond of the litter and she too was grieving so much for the one she kept, River who was a national champion. This week we received news that the sonogram shows 7 possibly eight puppies due around March 4 to 7th!! So a grand nephew of Tosca will be joining our family this Spring!!!

Got any great name suggestions. We know the litter is wildflowers but name can be anything....

Garry ask how much fish meal and spirulina to used in his egg food? And do I use kelp?

As you breed birds, you will learn many good ideas that improve your birds health and breeding success. A few of the ideas we actually try and then evaluate if it was a positive affect on our birds.

Yesterday, I tried a modification of my original Border Veggies. Which started out as dry soybeans soaked in boiling water and broccoli. A few years ago, Donald suggested I add cauliflower to it. I did and the texture was better, did not pack down and hence birds ate it better.

Last year, when I was unable to get Miracle (from Italy through ABBA Products in the US) I compared Breedmax (from Belgium) to Miracle (which I was running out of). These are similar products with high amino acid content, my experiments started using Breedmax just like Miracle (one tablespoon) to four cups dry nestling food. Both worked but the Miracle recipe was much better for most of my birds, except for Borders, who did better on Breedmax using the same dosing formula.

After reading Darren's post, I tried the frozen green soya and added conditioning seed to encourage eating the green soya. The next experiment was the suggestion of Darren"s and Donald's post, to try the Breedmax in the border veggies. The box said one scope (scope from box) to 100 grams of food, which I weighed and was one cup of the soya/veggies mix. After one day, the change in the males was impressive, much louder and much more breeding activity. In fact it was a little too much for just one day later, I went back and re-read Donald's post and I am changing to 150 grams soya/veggie mix as he does which will work better with the other things I am doing.

The point of this long response is to show that you have to try and see the affect and modify your recipe. If you send me more information on the nestling food, I can give you a guess on where to start your experiments. When I used fish meal, I used a tablespoon to a very large recipe with lots of cous cous (largest orange tupperware bowl) and about a teaspoon of spirulina and cut back on eggs. You must be careful not to overdose the protein, which will cause nestling diarrhea and birds that eat much of it to favor or even damage their feet. Once your birds are breeding, it is generally not a good idea to change things unless you are having poor results.

Have not used kelp.
Posted by Linda Hogan at 7:47 AM

Dan and I are excited for you and your family.
While we never forget the member of the family after they pass; we welcome the chance for a new addition.
Do we really miss the potty training part that bad?
(Humor intended)

I read in your book about the benefits of Spirulina and Fish Meal but I can't find in the book how to use them...can you please tell me how to use them? Also, do you use powdered kelp and if so, how to use it also.