This Weeks Questions and Comments

Hanging on the Wire 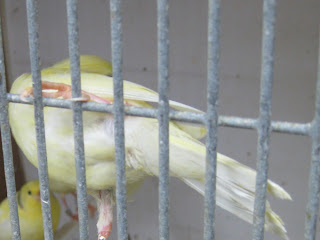 I start chicks out in a weaning cage with no perches. When you see them flying up and hanging from the wire, it is time to put more perches in the cage. Hanging on the wire in hard on the tail and wing feathers and putting in more perches where the birds want them will fix the problem.

When eggs fail to hatch on the 14th day, I check to see if there is an alive chick still to hatch by floating fertile eggs in warm water and watching for movement. If it moves even just a little, I place it back in the nest. Any eggs that do not move in the warm water, I give a further a further test of making the water hotter. Sometimes the chick will wiggle in hotter water.

Critical Concept: Fertile eggs that fail to hatch by the 14th day and fail the water test, should be retested in hotter water before concluding they are deceased.

Thursday Great Comment by Anonymous, Thanks You So Much For Sharing!

Double yolkers have never hatched for me personally, nor do I know anyone for who they have.

I dislike to see them in the nest as I feel that they can interfere with the hen turning the eggs.

It's strange how some hen's lay large eggs and some lay small eggs. I have always been of the opinion..big chick= healthy chick. Maybe this is a nonsense, but this year I obtained a very good hen Border in a swap. Normally I do not take in other fanciers hens, but this was (is) a very fine bird. Despite her large size, her eggs were (compared to my own bred hens) small and round, rather than large and oval. I was disappointed and feared the worst. particularly as I had paired her to my largest and best stock cock, if the eggs were full I felt sure that the chicks would be unable to turn in the egg and die before chipping. Despite my worries she hatched five normal chicks, which are now weaned and they are as it happens very large birds.

Another thing which happened (only yesterday) was that I had a nest of eggs due, 4 full eggs down 14 days, I seen the hen down at the hopper so took the opportunity to have a peek. None had hatched yet, but I noticed that she had stood on one of the eggs, the shell was indented in several places from the outside. I floated the egg in tepid water to see it the chick was alive....no movement at all.
This confirmed what I suspected, the chick was dead, I chipped the top of the egg and there was a void...empty, so I threw the egg in the waste bucket where it smashed and to my horror discovered that in the other half of the egg was a chick ..alive and yolk sac unabsorbed.

I wasn't happy about it but have comforted myself (rightly or wrongly) that that the chick would have died during chipping as it was confined to only one half of the egg.
I was sickened, as normally the floating method is very accurate, one a positive note, here remaining three eggs hatched today.

Young Birds Picking On Each Other

Linda, I have a problem maybe you can help me with. How can I prevent/stop young birds from pecking on each other especially on the wing butts? Several have ended up bloody. I have them in a large flight cage. Last year, I separated birds into their own cages, but don't have that option this year - too many birds. Any solutions? Nina Rapp

I have a chick at 9 days whose leg is splayed out to the side - badly. This is only the 2nd young chick I've ever had with this condition. I saw in the Norwich Newsletter (I think) a method to pull in the hip and leg by anchoring in place with a sponge. Last time I tried tying the two legs together to pull it in. That attempt was unsuccessful.
Posted by Linda Hogan at 12:01 AM

Linda
I have a chick at 9 days whose leg is splayed out to the side - badly. This is only the 2nd young chick I've ever had with this condition. I saw in the Norwich Newsletter (I think) a method to pull in the hip and leg by anchoring in place with a sponge. Last time I tried tying the two legs together to pull it in. That attempt was unsuccessful. It is a roller - my first thought was euthanasia, now I'm thinking of the sponge fix method? Ideas?
Deb ( I don't remember this on the blog before???)

Spraddle leg is difficult to correct. It can be one or both legs splayed laterally.

The chick can be taped over a piece of foam rubber pad, sanitary napkin, or placed in a piece of foam with slits cut for the legs or they can simply be taped at the tarsometatarsus with padding of cotton.

Care should be taken not to bind the tape too tightly. If you elect the hobble, it should be changed every two to four days to allow for growth.

I have not tried the slits, (in the right thickens to hold the legs) foam, but that treatment sounds intriguing to me.

Birds with the problem can be treated with extra vitamin E and selenium.

The major reason that young birds pick on each other is too much animal protein in the diet and overcrowding.

As soon as chicks are eating well, stop plain hard boiled eggs and see if that is enough and if not drop the amount of egg in the nestling food. Increase peas and corn. greens, and plain dry nestling food. Get them eating plain white bread too. I am now feeding them while bread twice a day. High protein diets will cause them to be too thin too!

Separate the ones with the most picking, especially any showing blood. You may have to completely pull any feathers that are bleeding.