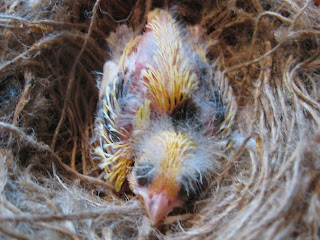 When I checked this bird's nest of fertile eggs which were due to hatch, I discovered that all four of the fertile eggs were smashed in on the side and some of them had been picked and were bloody. But one smashed egg was not bloody so I carefully took that chick out of the shell using a little warm tap water to remove the shell where it was stuck and then put it back in the nest with its mother and added three plastic eggs to support the frail chick. Normally chicks are not feed for a few hours after hatching as initially they live of the absorption of the egg yolk. So I did not hand fed it at birth.

Unfortunately, I was working 2nd shift that day and would not be able to offer it a bite if it was not being fed. For newborns, I prefer not to give them any food to keep from upsetting the hen but in some rare cases, like this one, I do if absolutely necessary. In those cases, I find that some ABBA green 92 with warm water and made up soupy is better than Exact Hand feeding formula which I prefer after banding.

All the time at work, I kept wondering if the chick would be dead the next morning. I did not even take its newborn picture as I thought it was likely hopeless! Was I ever excited when I saw the well fed border chick the next morning!!!! 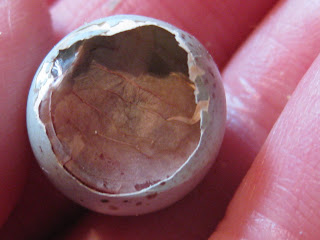 Poor quality egg shells can result in the egg being smashed as I described above or the egg may dry out and prevent the chick from being able to pip through the membrane which when dried out is very tough, thus it is unable to breathe air and start the normal hatching process.

My borders are the most difficult to get a good shell on their eggs. Poor shells mean trouble!! To improve the egg shells, I have recently added a poultry shell product and will report back to you as soon as I have evaluated it.
Posted by Linda Hogan at 10:26 AM

God news on your Border chick.
Do you think that the colony system is responsible for the loss of the other eggs in the nest, as it sounds to me as though one of the other cage dwellers has sabotaged the nest while Mom was off the nest!!

This was one of two border hens who were caged in single dwellings without a male.

The quality of the shell was very poor. I fine that borders absorb poorly and need more nutrients than other kinds.

Last year, I had a border hen who broke all her eggs as she sat on them because the shells were so very thin..