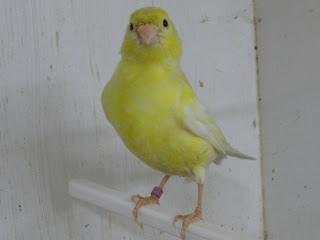 DKB imported hen from breeder DKB 3503 wins this one but we both lost!!

This hen has been somewhat difficult to deal with from the start. She rejected the advances of my precious DKB 3501 #30 import male even though she was building her nest and getting ready to lay and even though I was moving her to his territory. All she wanted to do was fight with him and pull his tail feathers to line her nest.

This hen had raised four babies in Canada this season with a fantastic Bartel male before coming to the States. My general rule is raise five and you get the rest of the season off..

She eventually laid four eggs and to my amazement two were fertile in spite of all the fighting but then only one chick hatched. It was a beauty with the special mark on the side of the head and was growing well. Already I could fantasize about what a phenomenal bird it would be..

Late yesterday afternoon on my final trip to the aviary, I made a very bad decision. Seeing how much it had grown and how full it was, I decided it had to banded right then......

It has been a long time since I have seen a hen who got made over the band but this one did!! From the way its crop looked this morning when I found it, she must have thrown it out of the nest immediately!!

It was alive and I warm it in my hands a few minutes but the problem of extreme hypothermia was complicated by the crop which the mother had filled so full before banding had not emptied.

Usually even when the chicks look dead because of being thrown out of the nest, they revive after warming. This time it just did not happen....he was barely alive when I found him.

At times the chicks accidentally fall out of the nest and wanting to get to the bottom of this and to let the hen know her chick had passed, I placed the dead chick back in the nest for a few minutes. In a couple of minutes, I went back to remove the chick and sure enough, in that few minutes, she had quickly removed and discarded its band...

Critical Concept: Beware and check the floor after banding to make sure a mad momma has not thrown her chicks out of the nest!
Posted by Linda Hogan at 8:15 AM