Morning Walk Through The Aviary

As I was walking through the aviary this morning, I shot a few pictures to share with you. 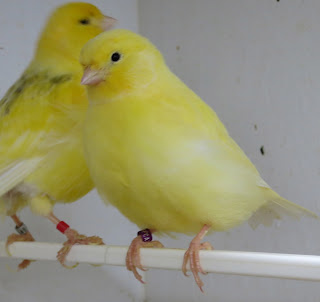 I really love this Columbus Fancy Chick in the foreground! I need to get some Columbus Fancy show cages as I plan on showing three in Tulsa at the National Cage Bird Show.

Perhaps a Columbus exhibitor will recommend a source. 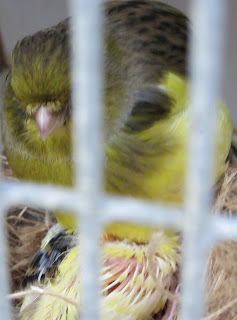 An excellent mother, hiding the last of 25 Border Chicks this season! 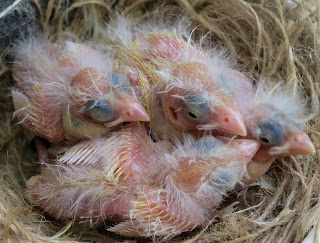 Generally, I like to limit the number of chicks to five for a single mom and six or seven for a pair. This German Roller pair would start laying before the chicks were weaned and thus I would collect and save the eggs not wanting the chicks to soil or crush them. So they trick me into going three rounds.. They raised four chicks in the first nest,  five in the second nest and four in this last nest! The hen is a daughter of Mario so I am anxious to hear the males sing. 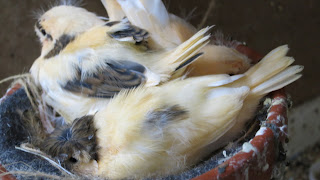 Cute nest of Stafford chicks are on the verge of leaving the nest and when I approached with the camera they started hiding! 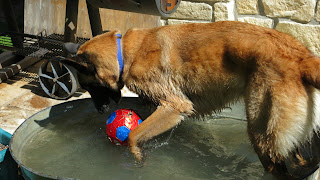 Lucca likes to play in this old family bath tub. He jumps in for a swim several times a day especially when he is hot from playing fetch with his chuck-it ball or soccer with the ball pictured.

The tub was actually the bath tub used by my husband and his family when he was a child, sixty-two years ago! In addition to family bathing, he remembers also making cucumber boats and floating them in the tub and at times washing his dog Clancy in it!
Posted by Linda Hogan at 8:26 AM

How about a source for Roller
Song Boxes and Training cages. Does anyone make them anymore? Even
C.O.M. song boxes would be accepted.
Thankyou.

We just recently got our first 2 baby birds. I was able to stumble into this great blog, thanks for all the information and sharing your expertise with us. We had some problems with our 2 babys the mother was taking the birds feathers for her new nest and so we had to take me apart with their dad, very frustrating, luckily they seem to be doing good and now they seem to be eating by themselves.
A couple of quick questions if you could answer them for me; I wanted to build a fairly big aviary but can't find a good mesh that doesn't look like a jail, also everywhere I look they say not to use galvanized because the birdies can eat it and may die, is there a place online or a store that carries a nice mesh suitable for the birds.
Also where would I be able to get those tagging bands, I am not really planning to be a big breeder at all but would like to keep my birds tagged if I do end up mating more canaries.
And lastly, how do I know if they need hand feeding? I was looking through that powdered food and it seems like they need constant feeding and I am not able to hand feed them that many times a day since I am not home most of the time.

Thanks for your time and your great blog.

Perhaps one of the bloggers will comment on material for cages and sources.
Bird bands can be purchased from the respective clubs for the breed and LM.
If the chicks are fluffy with baby fuzz they do not need hand feeding. Provide the parents with dishes of the powdered hand feeding formula. Chicks grow especially well when the parents feed it to their chicks! The number one reason that birds fail to feed in our meddling!