Chick Doesn't Want To Grow Up - Old Enough To Vote?

My breeding season has went so flawless that I have only hand fed one chick on a regular basis. It was the last to hatch in a nest of four German Rollers and while three chicks thrived, it grew poorly from the start.

At about five days of age, it had a sealed vent and without constant checking, washing the vent and changing this cage's diet to high carb and low protein, it and one other nest mate would have likely died. (only two nests this season had this problem.)

At first, it just would not feather and then what came in were sparse and light colored. He can eat on his own but prefers to have about three hand feedings a day too.

When I work at the hospital, my husband Pat does bird duty and that includes hand feeding "baby". Yesterday, in frustration over the number of cages to feed and then on top of it being called and ask "Did you feed baby?" He remarked "When is this going to stop? He is nearly old enough to vote!" 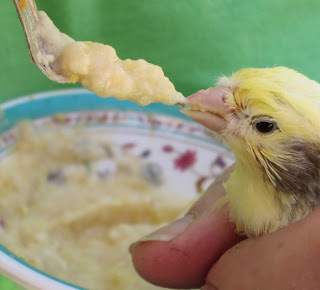 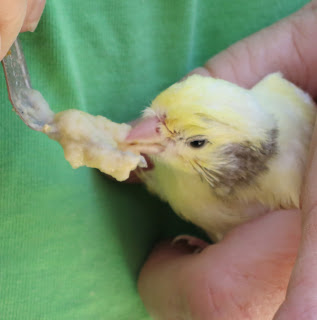 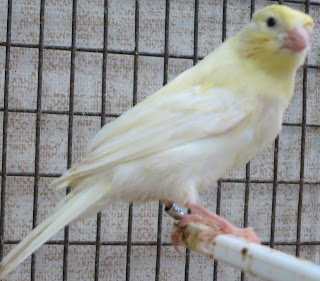 Finally, after reading this post on June 6th, Baby decided to be a Big Bird and is finally all on his own! 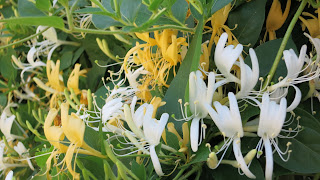 I have a serious problem with my new hen ,My hen suddenly lay eggs, but the eggs soft and seemingly without shell.. i'm very confusing about this matter , please give me advice.
i'm sorry for my bad english

You are right to be concerned as when a hen lays soft shelled eggs they can somethings become egg bound and unable to lay the soft shelled egg which if they do not get it laid they will die.

Increase the calcium in their diet. You can bake empty hen eggs in the oven or microwave 1.5 minutes and then grind them in a food processor or put them in a plastic bag and crush with a rolling pin. If you can get 23% liquid calcium gluconate, try where they sell cattle supplies, add one tablespoon to a gallon of water. Offer unlimited mineral grit if you have it.
This hen will like not produce this season.

On July 10 a breeder friend gave a 3 year old AS male to me, which had just completed the 2013 breeding season. This breeder had bred him to two different hens which produced 4 nests and 9 offspring. He came to me in full moult, completely exhausted from breeding and rearing young. He is extremely thin, and very tired. He eats fairly well, but is visibly in need of nutrition assistance to moult and get back to normal.

I am feeding him L'Avian canary mix, Petamine, song food, and couscous - as well as oatmeal and flaxseed mixed with various other foods such as cornflake crumbs, wheat germ, corn meal, LeFeber's pelleted food for canaries, and baked, crushed egghells mixed together.. I am also adding broccoli heads, dandelion, cooked carrot, endive, and apple now an then to his diet.
He gets LeFeber's vitamins in his food, also.

This is a very nice American Singer -- but right now he has a very small voice, and is not singing. I have heard him sing his full song in the past, and it is beautiful. Am I on the right track to get him back to good health, good song, and good feathering?

Thank you for your advice..