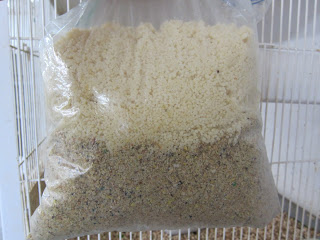 Chicks that are weaned are flighted or caged together in groups. Since some birds in the aviary are still breeding, I can not cut the lights to discourage picking and aggression. So I have cut the amount of animal protein in the diet.

Protein is protein and the same amino acids whether from animal or plant source but animal protein is more digestible and has a more dramatic effect on the birds. Certainly we need protein as feathers are mostly protein but I do not want the aggression, foot favoring, or weight loss that can accompany feeding larger amounts of animal protein. I soften the effect by increasing the vegetable protein instead of animal protein and increase the portion of carbohydrates in the diet.

My regular nesting food is now being diluted half and half with cous cous. 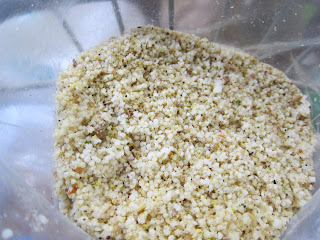 Take a look at the mixed nestling food, it is very light and fluffy. 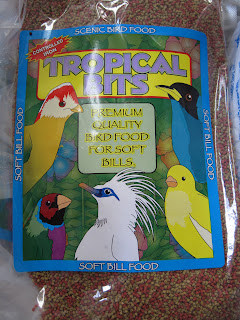 I am also feeding Tropical Bits a 20% protein product designed for softbill's that is all vegetable protein. Tropical Bits is made by Scenic. 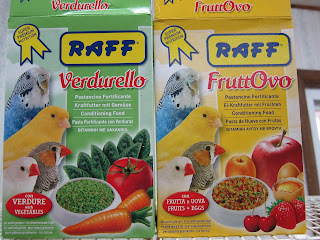 Recently, I added these two Raff products from Wings, Connie Garman. The Verdurello does not have animal protein but the FruttOvo has a small amount of egg. 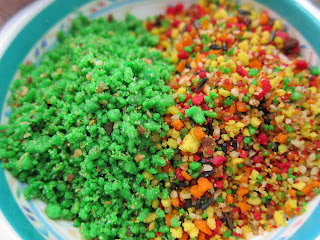 I am hoping the Borders will take to the green one especially as they much prefer vegetable to animal protein.

A bonus in dropping animal protein and increasing the carb's in the diet is to make sure the chicks are a normal weight and not too thin. As you know, when the first chick leaves the nest, I feed quartered hard boiled egg as the chicks quickly learn to nibble on the cut edge but once separated from the parents, I move them to higher carb foods such as white bread, oatmeal, wheat germ, plain ABBA green 92. I stop the pure hard boiled egg as on a high protein diet, they lose weight. Thin birds are prone to going light.
Posted by Linda Hogan at 12:03 AM

Do you feed Quinoa? I feed it cooked and sprouted. The seeds need to be rinsed before cooking or sprouting. Its great for weaning chicks.

I do feed quinoa. I put two cups quinoa in my rice cooker, rinse well and add water to near the top of the rice cooker and turn it on just like I would for rice. Quinoa is a superior grain as it is very balanced in amino acids.