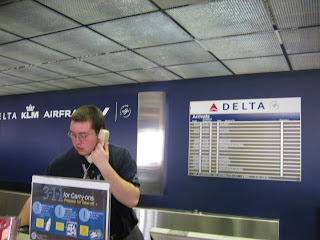 The birds were suppose to arrive at 4:30 pm at the Delta counter. But alas, no birds on the flight!! The agent checked the computer and made a few calls and told me that a storm in Atlanta had caused a shut down and the birds would be on the next flight arriving at 8:00 pm.

The airport was deserted as I stood patiently at the counter. Finally, about a half hour later, the same agent appeared with the birds and his first comment was "I checked them and they are all alive"!! 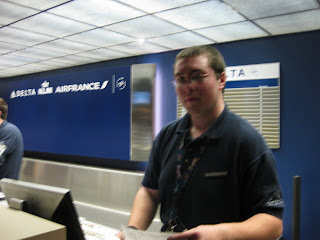 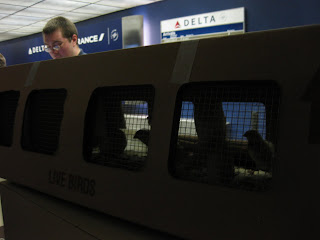 Alive yes but the box which is well constructed but cardboard was wet and the top was warped inward!! The birds had been out in the storm!!! 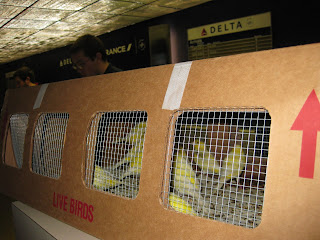 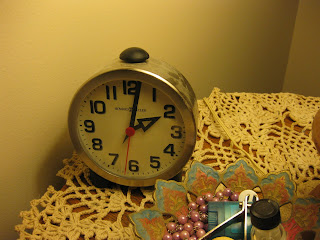 Arriving home to my bedroom, I transferred the birds to a carrier for overnight. 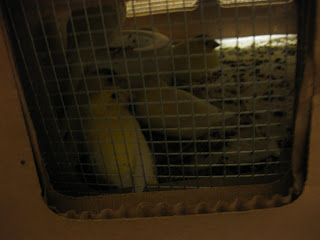 They looked somewhat rough in the shipping box. 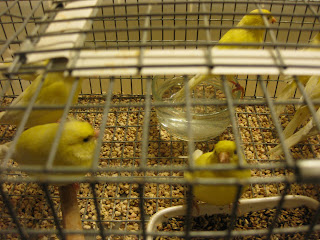 Still looked like a hard trip in the carrier! 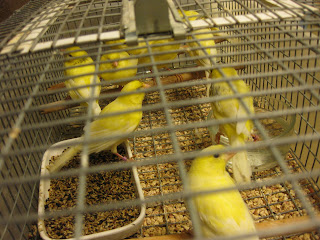 After letting them eat and drink for an hour, the birds and I went to bed at 3 am!! This morning as the sun came through my window at 7 am. I heard just a squirt of beautiful hollow roll that I have dreamed of since my first trip to Germany!!

I moved the birds to individual cages on one side of my aviary. They all have taken bathes in cold water and are eating and they look better and better. It appears that the best male will be breeding in a few days!!
Posted by Linda Hogan at 9:38 AM

Am I right Linda, these birds came from Germany via Canada. What a long trip for them and you. So glad everything worked out allright. It must have been a trying wait at the airport. Janet

I thought it was just me. A few years back I decided to import from Belgium. A Canadian fancier offered to quarantine, and share the expense. We filled forms and paid fees. He drove 13 hours to meet me at the border. Some jealous U.S. breeder had reported him as a bird smuggler. They didn't even look at his paperwork, and threatened to arrest him if he didn't leave immediately. We both returned home. His fiesty wife decided she would use her maiden name and ship by air. When they arrived here, I opened my check book and brought a Federally approved Vet. Some government employee decided I couldn't have the birds. I told him to show me something in writing or I was going to walk over and pick them up. I swear he reached for his gun, and that's when the Vet. intervened. The whole process had taken over three months. They looked like they had been pulled backwards through a key hole. I feel so much safer knowing our borders are secure from canaries. :)

Congrats for your new birds ! I know that Tony Schlott have great birds.

You're right about the paperworks, it's a nightmare. I had the same problems last year with Jan Davie for my Staffords (USA to Canada)

The birds were imported into Canada from Germany. They are all registered DKB traceable bands. They were quarantined a month in Canada and came out of quarantine Jan 26.

David talked to customs before we decided to get them and they were encouraging and said it would be no problem.

Our friend Tony picked them up and took them to his aviary in Canada. That is where they have been till Wednesday when David went through all the hoops with customs to bring them to the U.S.

Birds are looking better all the time!!

I have also gotten German Rollers from Birds Express. They have imported birds for over 20 years and they have an approved quarantine facility too. This is where my first DKB birds came from in 2007. David visited their facility during show season and it is very clean and well done. Their web site is www.birdsexpress.net.

This year, the German breeders who I wanted birds from, sent them to Canada...

Linda it would be nice if there was a way to be able to but your new German Roller song on your blog so we all can here it.
Thank You,
Bob

Well done on your new imports Linda! I am sure that you are going to have many years of delight from them.

I think it is a fantastic idea to have some of their song on the blog!

A friend and I are investigating importing Fifes from the UK to SA, but just trying to get info about it seems to be a daunting experience! Can't afford to bring in Borders at the costs they go for at the moment anything from 200 to 750 pound I believe - try multiplying that by 11/ 12 and you get to an astronomical Rand value! And then the dead costs like vets, transport and quarantine simply adds up to almost double that of the birds itself! Oh well!!!!!

Shawn why don't you ask Donald Saunders.....he imports birds from Phil Warne, it costs him £3,000 sterling for the "dead costs" shipping, vets, quarantine and then there is the cost of the birds!!
It's £3,000 regardless of number, why don't you bring birds in together, it would make more sense. Or why don't you get some Borders from Belgium or Holland, cheaper prices and not bad birds either....

Donald and I are good friends and we have spoken about it in the past. Even then it worked out at around R30 000, and that is a bit hectic for me. But on a lighter note, I am fortunate enough to each year get birds from Donald, which are all off the PW lines. Last year I got 3 hens and four males from him - all whoppers! Unfortunately I did not breed that well with the borders last year, but of those I reared are looking really nice.
It looks like the Fifes are going to cost in the region of R30 000 to bring in 10 - 12 pair. But if there is three or four of us, it would be ok, as they are charging around 30 pound per bird as opposed to 450 and 750 pound for Borders...

On the Dutch birds I must admit I have not checked it out well enough, but my first choice on Borders remain PW's lines.

Thanks for the tip!
Shawn